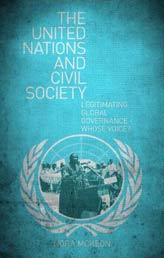 The United Nations is not just about governments. Civil society has played an increasingly important role in UN deliberations.
By Aurora Ellis | June 16, 2010 Institutions of global governance such as the United Nations are often limited to inter-governmental dialogue with little input from the civil society actors they directly affect. However, in her book The United Nations and Civil Society: Legitimating Global Governance – Whose Voice?, Nora McKeon documents the interaction between civil society organizations (CSO) and the United Nations over the last two decades. Developments between the two actors, she argues, point to meaningful civil society inclusion within the global political system.

McKeon’s book examines the World Food Summits of 1996 and 2002, the review sessions, and the parallel NGO forums. She maintains that although the initial World Food Summit did not include CSO proposals in the final overall plan of action, it did provide a basis for institutional normalization of civil society through the FAO’s review process, which would serve as a source for new policy guidelines to promote a “partnership culture” between the FAO and civil society. Civil society, McKeon emphasizes, is composed of more than just NGOs but also “people-based organizations” and social movements, whose members more directly represent their constituencies and thus have more legitimacy than other civil society actors.

McKeon acknowledges the political and economic limits of the UN in its attempts to curtail the powers of transnational corporations and the few wealthy governments of the world who impose a neoliberal agenda on the world’s poor majority. She also recognizes the lack of political will within the UN and its inability to address structural inequalities or promote accountability. Yet, McKeon still insists that the UN is the only international institution with the potential to move forward. She argues that the global summits of the 1990s demonstrate the UN’s capacity to recognize the focal challenges facing the developing world and that it has begun to acknowledge the importance of civil society incorporation.

The concepts presented in the book are thought-provoking and relevant to many aspects of international relations. However, the general readability of this book is at times problematic because of the frequent and indiscriminate use of acronyms for the myriad organizations and terms the author discusses. The use of such language borders on jargon and indicates that the primary audience of this book is UN specialists and civil society organizations focused on agricultural and food issues.

The author’s research, however, is critically important, for it challenges the notion that the systems of global governance are impermeable to non-governmental actors and cannot act as a forum in which civil society can engage. She encourages CSO actors to continue to persevere with the UN system, while concurrently recognizing the barriers to establishing a meaningful political space for a civil society that can effectively broach issues of inequities within the economic system.

Aurora EllisAurora Ellis is an intern at Foreign Policy In Focus and a student at Howard University.