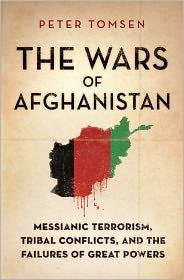 Review: The Wars of Afghanistan

The Obama administration can still learn from the errors of its predecessors in Afghanistan.
By Adam Cohen | July 21, 2011

Drawing on newly released documents, personal anecdote, and keen analysis, former U.S. Ambassador Peter Tomsen relates a brutal portrait of Afghanistan from its origins to the present day. That present is as dark as the recent past. Despite the glum historical perspective, Tomsen’s final analysis in The Wars of Afghanistan: Messianic Terrorism, Tribal Conflicts, and The Failures of Great Powers leaves a ray of hope: “By learning from the past wars of Afghanistan, the Obama administration still has a chance to shape a conclusion to the current one that serves the interests of the United States and its friends, uplifts the people of war-torn Afghanistan, removes Afghanistan as an arena of competition among outside powers, and taps the vast economic potential of middle Eurasia.”

In Afghanistan, foreign soldiers primarily led and fought the war. The training of Afghan troops continues, but not quickly and vigorously enough. Distrust festers between the Obama and Karzai administrations. The Afghan government is disconnected from the distant provinces – a relationship crucial to the legitimacy of government authority. Problems in the rural areas include corruption, the persistence of the drug trade, and the uncoordinated dispersal of foreign aid.

Tomsen saves his most critical assessment for Pakistan. This focus on Pakistan is essential to understanding Tomsen’s take on the war. In his view, Pakistan is key to bringing stability to the region. Its cooperation is imperative to slowing the insurgency. Unfortunately, Pakistan assumes the role of spoiler for Afghan prosperity, supporting Islamist terrorist organizations to fight destabilizing proxy wars across its borders. Pakistan considers the Taliban and an insecure Afghanistan to be valuable geostrategic assets.

Pakistani leaders manage to support the insurgency while simultaneously maintaining a lucrative alliance with the United States. From the outset of conflict in 2001, supporting Pakistan has damaged the U.S. effort to curb the insurgency. The problem of Pakistan must be resolved if the situation in Afghanistan is to improve.

Tomsen criticizes U.S. policy as incoherent and lacking direction. The United States ought to honestly and precisely dictate its interests and create a plan of global action. Policy in Afghanistan and Pakistan requires consideration of local history, custom, and realities. Had this been done after September 11, 2001, “America would not be mired in Afghanistan today.”

To fill the void, Tomsen outlines long-term goals for both Pakistan and Afghanistan and the steps needed to reach them. His list is unwieldy at times, but Tomsen should be applauded for this effort. He envisions a future in which the insurgency no longer preys on the Afghan people, and institutions are sources of legitimate authority capable of providing for their own security needs. He calls for a “balancing act” that acknowledges the average Afghan’s disapproval of foreign intervention while still fearful of U.S. abandonment

He also proposes that the United States selectively withdraw as scheduled in step with the improved performance of Afghan Security Forces (ASF). Militarily, the United States must work doggedly to reduce civilian casualties. Actions must be taken to orchestrate interagency activities as well as to shift the leadership of the conflict back to the Afghans. Instead of muddling itself in another state’s politics, the United States should allow Afghan elections, and even negotiations with the Taliban, to proceed without U.S. involvement.

Tomsen urges the United States to be tougher on Pakistan. He even considers putting Pakistan on the list of states that support terrorism. The recent news that the United States will be cutting off a large percentage of aid to Pakistan until it renounces the insurgent groups suggests that the Obama administration may be taking this message to heart.

Tomsen approaches Afghanistan with cautious optimism. His criticisms are clearly constructive. He also gives a serious reconsideration of the problems facing the effort and a much-needed long-term plan. His final thoughts sum up his philosophy: the battle against Islamic terrorism is a “battle for Muslim minds.” To win that battle, the United States must “render support to the majority moderates in this struggle.”

Tomsen’s book offers authoritative insights and a principled policy for moving forward, but the book is not without flaws. He argues, for instance, for the carry-over of drone attacks across the Af-Pak border even though these attacks fly in the face of the very cultural sensitivities he thinks ought to underpin every decision the United States makes. A truly enlightened strategy would take into consideration the unpopularity of military tactics such as drone attacks and night raids that deliver the hearts and minds of Afghan and Pakistani society to the insurgency. In this one respect, he violates the primary thesis of the book, that success can only come from policies that work hand in hand with the culture of the land.

Adam CohenAdam Cohen is a contributor to Foreign Policy In Focus.