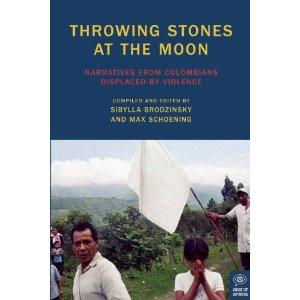 Review: Throwing Stones at the Moon

Colombia's enormous population of internally displaced people is incredibly diverse, but all are subject to violence and degradation on a daily basis.
By Gabriel I. Rossman | September 12, 2012

Colombia has endured one of the longest-running civil conflicts in the Western Hemisphere.

Throwing Stones at the Moon: Narratives from Colombians Displaced By Violence, edited by Sibylla Brodzinsky and Max Schoening, is a compelling compilation of personal accounts of the tragedies and abuses suffered by everyday Colombians during the country’s civil war.

The book conveys the stories of 22 of Colombia’s estimated 5 million despleados (“displaced people”) that have been uprooted during the turmoil. The socioeconomic backgrounds, political affiliations, and geographical origins of the interviewees differ greatly. What is common to all those interviewed is the violence and injustice to which they are subjected on a daily basis.

Throwing Stones at the Moon brings the reader up to date with the last 50 years of Colombian history, years that witnessed a brutal civil war that has repeatedly brought the country to the brink of collapse. In the 1960s, leftist guerrilla factions—most notably the Revolutionary Armed Forces of Colombia or FARC—formed with the hopes of overthrowing the government and began attacking the state. In the following decades, right-wing paramilitary groups, allied with conservative politicians and landowning elites, sprung up to fight back against the guerrillas. The Colombian military has also been involved in the conflict, often acting to aid the paramilitaries in their campaign to eradicate guerrillas and those suspected of supporting them. There has been one constant: the indiscriminate and almost incomprehensible terror inflicted on the country’s population by all sides involved.

The authors introduce the reader to María Victoria Jiménez, a union leader from a well-respected family who was stabbed seven times by right-wing assassins after she filed a complaint against one of her colleagues with the board of the hospital where she worked. They relate the story of Carmena Gómez, a cook whose son was one of the thousands of Colombians who, according to the U.N. Special Rapporteur on Extrajudicial Executions, was a victim of the army’s “cold-blooded, premeditated murder of innocent civilians for profit.” Readers also meet Rodrigo Mejía, a mule driver who lost his right arm, his family’s farmstead, and all his worldly possessions in an attempted murder by guerrillas seeking to expand their turf.

The footnotes and chapter introductions contain useful background to the conflict that helps educate the reader without overshadowing or interrupting the flow of the personal narratives. The appendices dive even deeper into the roots of the conflict and also emphasize the troublesome role the United States has played in Colombia’s recent history. During the 1990s, Washington partnered with Bogota to spray coca fields with herbicides, which failed to stem the drug trade but succeeded in pushing peasant farmers off their land. In 2010 and 2011, the U.S. government gave Colombia $8 billion in aid, 75 percent of which went to the country’s military and police.

The narrators explain that the book’s title “speaks to an apparently impossible task”—throwing stones at the moon. Indeed, Colombia’s conflict has gone on so long and left scars so ingrained that the prospect of restoring peace often seems like an impossible task. The book highlights the courage with which everyday Colombians live their lives in the face of the broken country around them. It raises the voices of tormented civilians in their own words and, in doing so, presents a unified and resounding call for justice and solidarity.

Gabriel I. RossmanGabriel Rossman is a contributor to Foreign Policy in Focus.