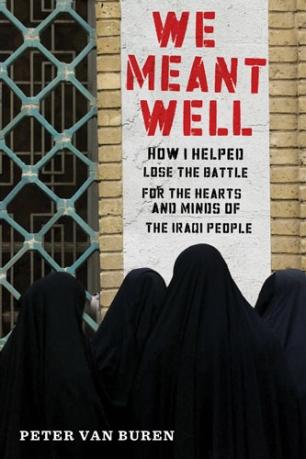 A long-time foreign service officer describes the farces and frustrations of the Iraq occupation.
By Christopher Bartlo | March 28, 2012 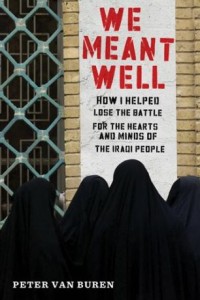 Peter Van Buren, a U.S. foreign service officer for 23 years, served the reconstruction effort in Iraq from 2009 to 2010. Appalled by the mismanagement he saw, Van Buren published We Meant Well in September 2011 detailing his experience and hoping to help the United States learn from its mistakes. The State Department launched an investigation of Van Buren’s whistleblowing but waited until mid-March 2012 to fire him — just “days before the Office of the Special Counsel was ready to begin their discovery request for documents” according to Van Buren’s Democracy Now! interview. Van Buren argues that he is being fired for criticizing the policies of the only recently politicized State Department, and points out that the Obama Administration has prosecuted more people under the Espionage Act than all other administrations combined since the law was passed in 1917.

We Meant Well is a painfully frank account of the State Department’s involvement in the Iraq occupation, and is apparently very inconvenient for an administration increasingly concerned with controlling internal criticism. The book is soaked in irony and pithy insights, and is worthwhile even for — especially for — those who were not able to keep up with the events of the invasion and reconstruction since 2003.

When Petraeus took charge in 2004, 62 U.S. government agencies were involved in Iraq with eight major coordination bodies at the embassy. However, without enough experts to staff the activities in the field, the U.S. authorities in Iraq created contractor positions under 5 USC 3161. Most were hired without interviews. Many of them were former military. The State Department did not offer language training, and only 29 of the 610 contractors deployed in mid-2007 spoke Arabic.

A few foreign service officers signed on. Some objected to supporting Bush’s invasion, but many were unsure of the goals and untrained in how to survive in a war zone. The State Department started pushing them toward this assignment by withholding promotions. Without any meaningful briefing on the political situation in Iraq, what he was expected to do, or how to do it, Van Buren was sent to lead a Provincial Reconstruction Team in the war-torn country.

We Meant Well is a tour of the highlights and lowlights of Van Buren’s time in Iraq reminiscent of Joseph Heller’s Catch-22. In that novel, the protagonist, an Air Force bombardier in World War II, is the only source of lucid and critical thought in a world gone mad. The most disturbing difference between We Meant Well and the masterful 1960s novel is that Peter Van Buren’s story is not fiction.

The State Department’s policies in Iraq, by Van Buren’s account, were paradoxical, even farcical. From 2004 onward, the State Department decided that sewage, electricity, and clean water should not be major priorities because they would take too long to have an impact. Instead of restoring the city’s infrastructure, the United States instead focused on security and oil production, even though neglecting the healthy functioning of the cities quickly inspired more and more disaffected ex-soldiers to become insurgents. U.S. agencies encouraged small businesses to provide jobs, willfully ignorant of the fact that locals tended to be more upset by the foreign occupiers than the lackluster economy. At one point, Van Buren describes the United States flying in crateloads of dollar bills to finance the construction of giant refrigeration tanks that were useless because electricity was rare and unreliable.

In fact, everything seemed to be backwards. Foreign service officers promoted democracy by appointing local leaders, desalinating well water with a fleet of truck-sized processors that were not designed for that level of salinity, and generally applying for funding for useless ventures because the size of a budget was the only metric for the importance of a project.

One of the few positive stories in We Meant Well is that of “Dairy Carey”, a foreign service officer who discarded plans to increase and industrialize milk production (met with hostility and contempt by the locals) in favor of teaching dairy farmers how to keep the cows’ food clean and reduce diseases in the milk.

Dairy Carey … jettisoned a well-written plan that would have failed anyway to give people something they needed, something they could see would help. In Iraq, we were faced regularly with such frustrations and such cynicism that when something, anything, seemed to work, it was a special day.

Van Buren’s central message is that we must learn from history and our mistakes, and consider the consequences of actions before we commit to them. “Courage takes two forms in war. Courage in the face of personal danger, a requirement for tactical success … and courage to take responsibility, a requirement for strategic success.” Instead of continuing to prosecute any employees who expose abuse, mismanagement, and authoritarian policies, the Obama administration should take these lessons to heart and listen to these courageous whistleblowers.