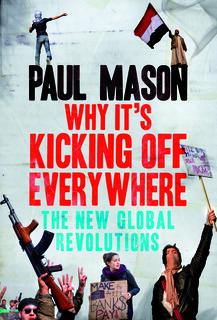 Review: Why It’s Kicking Off Everywhere 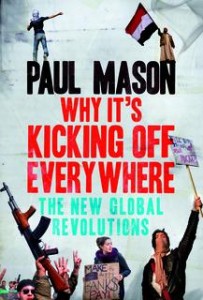 It was not sheer coincidence, journalist Paul Mason explains in Why It’s Kicking Off Everywhere: The New Global Revolutions, that drove people from places as varied as Egypt, Greece, Britain, New York City, and Wisconsin to stand up and speak out against injustice in 2011. Rather, a cascading international financial crisis brought the disconnect between governments and citizens into sharp relief, which ultimately resulted in a massive series of protests in all corners of the map.

Although many reporters have written off the protesters as radicals without any real vision, Mason gets down in the dirt with the people issuing the outcry, serving as an articulate and smart mouthpiece to help the rest of society understand the importance of these ongoing movements throughout the world. As a way of explaining the inspiration behind movements like Occupy Wall Street, Mason quotes Franco Berardi, a contemporary writer who states, “There is only one way to awake the lover that is hidden in our paralyzed, frightened and frail virtualized bodies. There is only one way to awake the human being that is hidden in the miserable daily life of the softwarists: take to the streets and fight.”

For Mason, Berardi’s statement shows why 2011 was so important; it was the year that people throughout the world realized that alliances and connections could occur instantly outside of social networking, and thereby drew on the lessons of activists from Berkley 1964. The Occupy activists learned from their predecessors that the process of taking a space, and then forming a community within that chosen area can be of great importance, because it builds relationships based on groupwork and collaboration without ulterior motives.

New relationships between citizens and technology in part enabled the viral spread of these movements. In the digital age, Mason explains, young people’s individual immersion in their new devices and social networks ultimately produced a unique brand of collectivism. It was through this “individualized collectivism” that they found each other, took to the streets, and formed united movements through which they raised their collective fists to the government and expressed their outrage with the existing system.

The global roots of this outrage, according to Mason, lie in Wall Street. It occurred as a result of the housing bubble bursting, the increase of value of mortage-backed securities, global imbalances in foreign currency reserves, and unprecedented global capital flows.

The resulting global financial crisis led to major financial problems for the Eurozone, particularly for the peripheral economies of Ireland, Portugal, and Greece, which were bailed out by Europe’s central economies. Such measures took place too late, however, and with too many strings attached. When austerity measures were imposed on Greece in particular, it sent many citizens into the streets, unable to tolerate further strains on their already cash-strapped budgets.

Similarly, conflicts over taxation and public services in the economically struggling United States had a correspondingly corrosive effect on the country’s politics. Many on the political right objected to President Obama’s stimulus package as fiscally irresponsible, eroding political space for bipartisan solutions to the crisis. Anti-union efforts spread in states like Wisconsin, which beleaguered activists found intolerable. A sense that the broader economy was rigged precipitated the momentous Occupy movement.

In the Middle East and North Africa (MENA), high youth unemployment resulted in massive unrest when financial disaster struck. Youth unemployment has long been an issue in the region. But it was compounded when global commodity prices – and therefore food prices – increased with the rise of the dollar internationally. This cost increase in the essentials of life was the last straw for many Arabs. Beginning in Tunisia with Mohamed Bouazizi, who set himself on fire to protest his frustration and anger with the Tunisian government, the MENA became a sea of revolution.

Mason’s final example is British social democracy, which has suffered as a result of the Labour Party’s response to the financial crisis. Instead of creaing jobs, it instituted tax credits. What jobs were created went largely to workers from Eastern Europe, which put downward pressure on the wages of British workers in the unskilled labor market. Due the dual problems of unemployment and anti-EU sentiment present in Britain at that time, many Labour supporters voted for the far-right British National Party. Labour’s relationship with its base has been stormy ever since. The London riots of late 2010 channeled much of the frustration of young people and the unemployed at the lack of opportunities that social democracy had long promised.

As the author so skillfully illustrates, the unrest of 2011 was not just restricted to incidents like Occupy Wall Street in New York. Social unrest was present in all areas of the globe, a result of economic problems, a growing “individualized collectivism” enabled by new technology, and a widening divide between governments and their constituents. From Tunisia to New York, Greece, Britain, sub-Saharan Africa, and the Philippines, stories of frustration and anger have echoed worldwide. And the protests have continued into 2012 as well. Why It’s Kicking Off Everywhere is an excellent, well-thought-out read for anyone who wants to engage with this new, rapidly changing reality.

Anya BarryAnya Barry is a contributor to Foreign Policy In Focus.