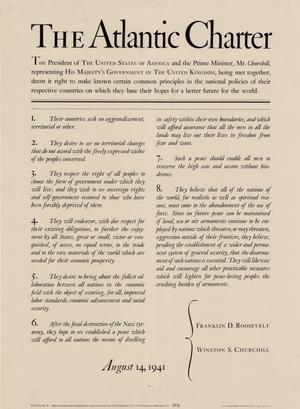 Today, like 70 years ago, the world teeters on the verge of calamity. It is important once again to face global threats as united nations.
By Dan Plesch | August 12, 2011 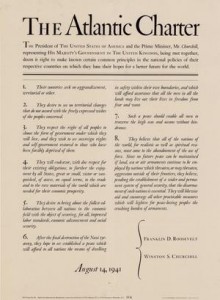 The world once again teeters on the brink of catastrophe, just as it did in the middle of the 20th century. Today, we face much more subtle threats – such as economic instability, climate change, weapons proliferation, and food shortages — than simply an axis of World War II adversaries. However, as with Hitler a half century ago, these issues constitute a tremendous threat to international security and world stability. They require the United States to once again broaden the purview of its foreign and military policy objectives and engage with its international partners to seek solutions.

How we handled our World War II threats contains some lessons for how we can rise to the challenges facing us today. August 14th marks the 70th anniversary of the publication by Franklin Delano Roosevelt and Winston Churchill of their aims for the post-war world. The Atlantic Charter laid the political foundation for the wartime alliance of United Nations and guided the development of a stable post-war international system that would seek to address the root causes of conflict in the hopes of avoiding yet another cataclysmic global war.

This Atlantic Charter demonstrates the breadth of policy necessary in modern times. The eight-point bulletin of war aims extended beyond simple military goals and included social security, improved labor standards and disarmament alongside fair and free international trade and respect for self-determination.

FDR realized that unregulated global business had produced the great depression, political extremism, and, ultimately, World War II. By pursuing a foreign policy predicated on robust multilateral engagement, Roosevelt sought to establish a strong and lasting international system in which nations would work together to prevent future calamitous global conflict. With the January 1, 1942 declaration that founded the United Nations, FDR presided over the establishment of an organization he hoped would help make his vision for the new world a reality.

Today, despite this legacy, U.S. policy has contracted in the pursuit of more limited interests. Indeed, the misadventures in Afghanistan and Iraq display just how much has changed since Roosevelt stood with the world at his side, ready to fight all evils and injustices and not just those that were most visible. President Bush’s unilateral prosecution of the “Global War on Terror” was only the latest and most pronounced stage of America’s shift since FDR undertook an internationalist approach.

As in 1940, the challenges facing the world today are far too great for any one nation, no matter how powerful, to take on alone. Many in America and throughout the world are still suffering from the crippling effects of the 2008 global financial crisis and are bracing for yet another economic downturn. We have already seen the early effects of climate change in places as close to home as New Orleans and Joplin, and as far away as Pakistan and Bangladesh. Rising food prices coupled with the booming populations of developing countries will place greater strain on an already overburdened international system. These challenges are not limited to any one nation or people.

Today, the lesson to be learned from the history of the Atlantic Charter is that the United States must once again broaden its focus. The global regulation of finance and trade will benefit worldwide social security and labor rights. Washington must reorient its military and foreign policy toward concerted action to address climate change and control the rapid proliferation of weapons. To face these challenges the United States must once again engage the nations of the world. The United Nations needs to become the organization that FDR envisioned: one that will act and sacrifice together when confronted with crisis.

Dan PleschForeign Policy In Focus contributor Dan Plesch is author of America, Hitler and the UN and director of the Centre for International Studies and Diplomacy at London University.