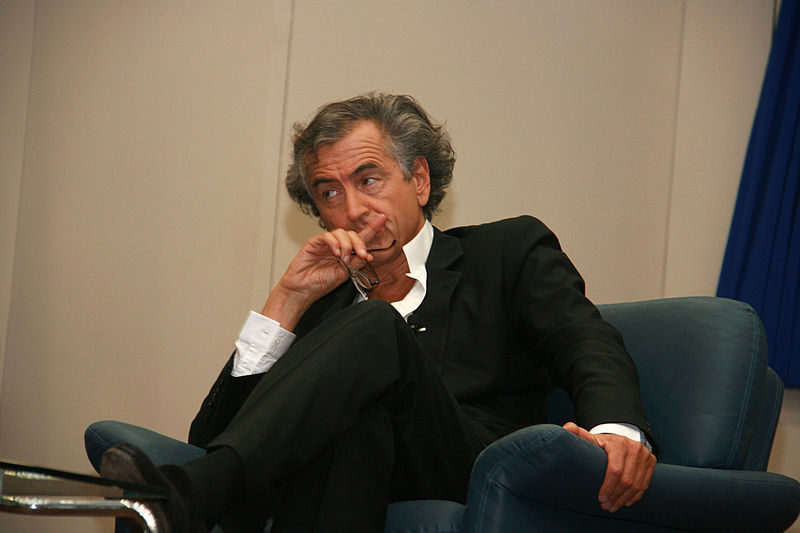 “Philosopher“ Bernard Henri-Levy (aka, BHL) worked undercover as a journalist to engineer the deal with Libya, thus paving the way for yet more journalists to be accused of being spies. (Photo: Itzik Edri / Wikimedia Commons)

Ripped From Hillary’s Emails: French Plot to Overthrow Gaddafi and Help Itself to Libya’s Oil

French intelligence plotted to overthrow Muammar Gaddafi to horn in on Libya’s oil and to provide access for French businesses.
By Conn Hallinan | July 9, 2015

The Congressional harrying of former U.S. Secretary of State Hillary Clinton over emails concerning the 2012 death of an American Ambassador and three staff members in Benghazi, Libya, has become a sort of running joke, with Republicans claiming “cover-up” and Democrats dismissing the whole matter as nothing more than election year politics. But there is indeed a story embedded in the emails, one that is deeply damning of American and French actions in the Libyan civil war, from secretly funding the revolt against Muammar Gaddafi, to the willingness to use journalism as a cover for covert action.

The latest round of emails came to light June 22 in a fit of Republican pique over Clinton’s prevarications concerning whether she solicited intelligence from her advisor, journalist and former aide to President Bill Clinton, Sidney Blumenthal. If most newspaper readers rolled their eyes at this point and decided to check out the ball scores, one can hardly blame them.

But that would be a big mistake.

While the emails do raise questions about Hillary Clinton’s veracity, the real story is how French intelligence plotted to overthrow the Libyan leader in order to claim a hefty slice of Libya’s oil production and “favorable consideration” for French businesses.

The courier in this cynical undertaking was journalist and right-wing philosopher Bernard Henri-Levy, a man who has yet to see a civil war that he doesn’t advocate intervening in, from Yugoslavia to Syria. According to Julian Pecquet, the U.S. congressional correspondent for the Turkish publication Al-Monitor, Henri-Levy claims he got French President Nicolas Sarkozy to back the Benghazi-based Libyan Transitional National Council that was quietly being funded by the General Directorate for External Security (DGSE), the French CIA.

According to the memos, in return for money and support, “the DGSE officers indicated that they expected the new government of Libya to favor French firms and national interests, particularly regarding the oil industry in Libya.” The memo says that the two leaders of the Council, Mustafa Abdul Jalil and General Abdul Fatah Younis, “accepted this offer.”

Another May 5 email indicates that French humanitarian flights to Benghazi included officials of the French oil company TOTAL, and representatives of construction firms and defense contractors, who secretly met with Council members and then “discreetly” traveled by road to Egypt, protected by DGSE agents.

Henri-Levy, an inveterate publicity hound, claims to have come up with this quid pro quo, business/regime change scheme, using “his status as a journalist to provide cover for his activities.” Given that journalists are routinely accused of being “foreign agents” in places like Iran, Saudi Arabia, Egypt, Syria and Afghanistan, Henri-Levy’s subterfuge endangers other members of the media trying to do their jobs.

All this clandestine maneuvering paid off.

On Feb. 26, 2011, the UN Security Council unanimously passed Resolution 1970 aimed at establishing “peace and security” and protecting the civilian population in the Libyan civil war. Or at least that was how UNR 1970 was sold to countries on the Security Council, like South Africa, Brazil, India, China and Russia, that had initial doubts. However, the French, Americans and British—along with several NATO allies—saw the resolution as an opportunity to overthrow Qaddafi and in France’s case, to get back in the game as a force in the region.

Almost before the ink was dry on the resolution, France, Britain and the U.S. began systematically bombing Qaddafi’s armed forces, ignoring pleas by the African Union to look for a peaceful way to resolve the civil war. According to one memo, President Sarkozy “plans to have France lead the attacks on [Qaddafi] over an extended period of time” and “sees this situation as an opportunity for France to reassert itself as a military power.”

While for France flexing its muscles was an important goal, Al- Monitor says that a September memo also shows that “Sarkozy urged the Libyans to reserve 35 percent of their oil industry for French firms—TOTAL in particular—when he traveled to Tripoli that month.”

In the end, Libya imploded and Paris has actually realized little in the way of oil, but France’s military industrial complex has done extraordinarily well in the aftermath of Qaddafi’s fall.

According to Defense Minister Jean-Yves Lodrian, French arms sales increased 42 percent from 2012, bringing in $7 billion, and are expected to top almost $8 billion in 2014.

Over the past decade, France, the former colonial masters of Lebanon, Syria, and Algeria, has been sidelined by U.S. and British arms sales to the Middle East. But the Libya war has turned that around. Since then, Paris has carefully courted Saudi Arabia, Qatar and the United Arab Emirates by taking a hard line on the Iran nuclear talks.

The global security analyst group Stratfor noted in 2013, “France could gain financially from the GCC’s [Gulf Cooperation Council, the organization representing the oil monarchies of the Persian Gulf] frustrations over recent U.S. policy in the Middle East. Significant defense contracts worth tens of billions of dollars are up for grabs in the Gulf region, ranging from aircraft to warships to missile systems. France is predominantly competing with Britain and the United States for the contracts and is seeking to position itself as a key ally of Saudi Arabia, Qatar, and the United Arab Emirates (UAE) as it looks to strengthen its defense and industrial ties in the region.”

Sure enough, the French company Thales landed a $3.34 billion Saudi contract to upgrade the kingdom’s missile system and France just sold 24 Rafale fighters to Qatar for $7 billion. Discussions are underway with the UAE concerning the Rafale, and France sold 24 of the fighters to Egypt for $5.8 billion. France has also built a military base in the UAE.

French President Francois Hollande, along with his Foreign and Defense ministers, attended the recent GCC meeting, and, according to Hollande, there are 20 projects worth billions of dollars being discussed with Saudi Arabia. While he was in Qatar, Hollande gave a hard-line talk on Iran and guaranteed “that France is there for its allies when it is called upon.”

True to his word, France has thrown up one obstacle after another during the talks between Iran and the P5 + 1—the permanent members of the Security Council plus Germany.

Paris also supports Saudi Arabia and it allies in their bombing war on Yemen, and strongly backs the Saudi-Turkish led overthrow of the government of Bashar al-Assad in Syria, even though it means that the French are aligning themselves with al-Qaeda linked extremist groups.

France seems to have its finger in every Middle East disaster, although, to be fair, it is hardly alone. Britain and the U.S. also played major roles in the Libya war, and the Obama administration is deep into the ongoing wars in Syria and Yemen. In the latter case, Washington supplies the Saudis with weapons, targeting intelligence, and in-air refueling of its fighter-bombers.

But the collapse of Libya was a particularly catastrophic event, which—as the African Union accurately predicted—sent a flood of arms and unrest into two continents.

The wars in Mali and Niger are a direct repercussion of Qaddafi’s fall, and the extremist Boko Haram in Nigeria appears to have benefited from the plundering of Libyan arms depots. Fighters and weapons from Libya have turned up in the ranks of the Islamic State in Syria and Iraq. And the gunmen who killed 22 museum visitors in Tunisia last March, and 38 tourists on a beach July 3, trained with extremists in Libya before carrying out their deadly attacks.

Clinton was aware of everything the French were up to and apparently had little objection to the cold-blooded cynicism behind Paris’s policies in the region.

The “news” in the Benghazi emails, according to the New York Times, is that, after denying it, Clinton may indeed have solicited advice from Blumenthal. The story ends with a piece of petty gossip: Clinton wanted to take credit for Qaddafi’s fall, but the White House stole the limelight by announcing the Libyan leader’s death first.

That’s all the news that’s fit to print?