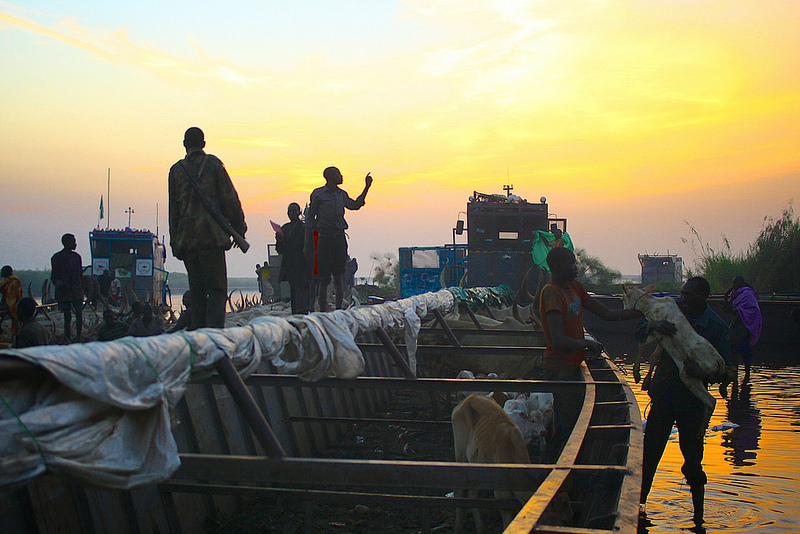 Refugees fleeing the fighting around Bor, South Sudan arrive at the settlement of Awerial. The recent violence in the country stems from a power struggle between leaders of rival tribes, but it has deep roots in the region's colonial history. (Photo: Oxfam International / Flickr)

A Roadmap for Peace in South Sudan

As the world's youngest country enters its third year of civil war, there are new hopes for a durable peace.
By Daniel P. Sullivan | December 22, 2015

The news out of South Sudan over the past two years has been devastating. And as we mark the beginning of the third year of conflict, the risk of famine and further atrocities remains grave.

But not all the news is bad. In 2015, a peace agreement was signed following increased regional and international efforts. The coming year has the potential to see that peace consolidated — if the country’s leaders follow through.

Below are three pieces of good news that came out of South Sudan in 2015 and three steps that must be taken to ensure that 2016 ends the trend of violence in the world’s newest nation.

A Peace Deal Signed – It took immense international effort and far too long, but in August 2015 the Compromise Peace Agreement was signed laying out a road map for democratic transition. Key to the deal is a power-sharing arrangement in which rebel leader and former Vice President Riek Machar returns to the capital Juba as a deputy in a 30-month transitional period leading up to new elections.

A Joint Monitoring and Evaluation Commission (JMEC) was set up led by former President of Botswana Festus Mogae and with strong backing by the UN and African Union. Implementation has already been delayed and the ceasefire violated on both sides, but the road map remains and with sustained international attention progress can be made.

Civilians Protected – The UN Mission in South Sudan (UNMISS) has prioritized protection of civilians and continues to shelter over 180,000 people in protection of civilian sites around the country. Despite government protests, UNMISS’ civilian protection mandate is set to be renewed and its force strengthened with additional peacekeepers. While challenges remain in maintaining the sites, this remains an unprecedented move that has saved tens of thousands of lives.

Famine Averted – UN agencies have released dire warnings of looming famine, including as recently as October. Thanks to an outpouring of international aid and continued pressure for humanitarian access, the worst has been avoided. Still, the International Committee of the Red Cross warns that hundreds of thousands of people in South Sudan still face “severe food shortages and an alarming hunger situation.” International efforts have prevented the situation from being much worse and are worth celebrating. But they should also serve as a reminder of what failure to implement peace can mean and thus help to ensure that such emergency efforts do not need to be repeated.

Security Arrangements – One of the first signs of progress in implementing the peace agreement was the beginning of removal of government and government-allied Ugandan troops from the capital Juba. In order for a transition to take place, a whole series of steps must be taken — from removal of remaining troops outside of Juba to the formation of Joint Police Units and disarmament and demobilization of troops. As stated by former U.S. Special Envoy to Sudan and South Sudan, Princeton Lyman, a key first step will be strengthening the Ceasefire Transitional Security Arrangements Monitoring Mechanism and UNMISS to ensure international monitoring prevents a return to conflict at the fragile early stages.

Establishing a Transitional Government – A Transitional Government of National Unity was supposed to be set up by November but has now slipped to January, partially due to security concerns by the opposition as many troops remain in the capital. As an advance team arrives in Juba ahead of Machar’s first return since the conflict began, steps must be taken to quickly begin the official 30-month transition period. Counterproductive moves by President Kiir, like setting up 18 new states and further restricting civil society space, must be rejected and focus turned to establishing a new constitution.

Accountability, Hybrid Court – An essential part of the peace agreement was the establishment of a hybrid court to ensure accountability for the atrocities committed during the conflict in South Sudan. There has been no progress on this point so far and if there is to be reconciliation and peace that works this will be needed. A first step will be appointing a head of the Hybrid Court.

This is by no means an exhaustive list. It should go without saying that humanitarian access should be improved and both sides held accountable for blocking of aid and harassment of aid workers. Fighting corruption will be an essential part of establishing peace and security. Government and opposition calls for funding will have to be measured against desires to buy more weapons and carefully calibrated with serious steps taken to consolidate peace.

Ultimately, implementation of the key aspects of the peace agreement will come down to the will of South Sudan’s leaders. If they are unwilling to put the lives of their citizens ahead of political and financial gain, then the countries that helped forge the agreement, particularly South Sudan’s neighbors, must be willing to hold them to account. Further regression will require new pressure whether in the form of an arms embargo or targeted sanctions on those responsible for getting in the way of peace.

As dire as the situation remains, the fact that a road map toward peace exists with backing by regional and international players is already an improvement from last year. But there is no time to lose in ensuring that road map is followed. The people of South Sudan cannot afford to wait.

Daniel P. Sullivan is the director of policy and government relations at United to End Genocide.