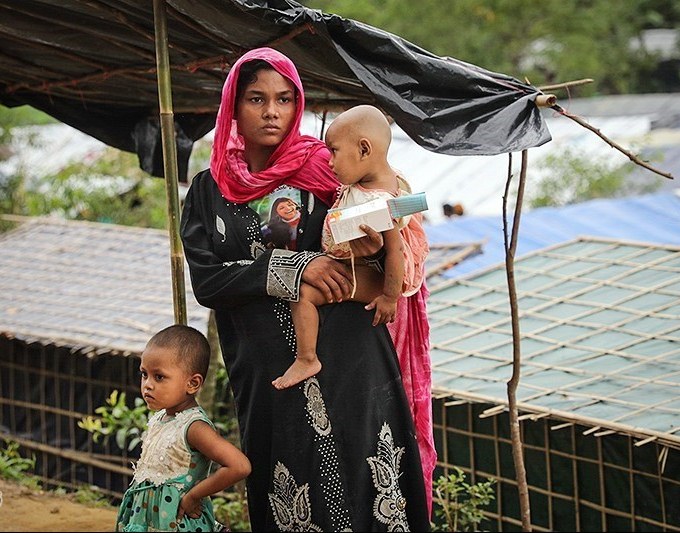 The Rohingya, R2P, And Civilian Protection

The failure of R2P is not in the doctrine, but in the states that refuse to implement it.
By Corrie Hulse | February 20, 2018

Imagine being forced to flee your home because the military is attacking and killing your neighbors, burning down your village, and raping and abducting your wife and children. You want to turn to your government for help, but it doesn’t even recognize you as a citizen. Your only options are to flee, or be killed. This is the plight of the Rohingya in Myanmar.

There has been a great deal of denial out of Myanmar’s government about the violence inflicted on the Rohingya—who is responsible, who is being harmed—but the facts speak for themselves.

Between August 25 and September 24 of 2017 alone, approximately 6,700 civilians were killed in Rakhine State on Myanmar’s west coast. Human Rights Watch reports that 215 villages have been burned. Civilians have been fleeing for their safety, and now there are currently upwards of 870,000 Rohingya refugees in neighboring Bangladesh.

There is no denying what is happening to the Rohingya. For the first time in years, the UN Security Council is in agreement about the scope of the atrocities, and the secretary general is referring to the situation as “catastrophic.” According to a U.S. State Department official, “it is clear that the situation in northern Rakhine State constitutes ethnic cleansing against the Rohingya.” Officials have steered clear of using the term “genocide,” but seem to be in agreement that a targeted ethnic cleansing of the Rohingya is taking place.

Violence against the Rohingya population is not new. They have been continuously discriminated against, oppressed, and violently attacked over the past few decades. With no recourse, and with the violence often coming from the military itself, they are left with few options.

In a situation such as what’s unfolding in Myanmar, the international community must look to established mechanisms to respond. In the case of ethnic cleansing, and potential genocide, the Responsibility to Protect (R2P) should guide that response. R2P offers three pillars—the responsibility to prevent, to respond, and to rebuild—as guidelines to addressing looming and already occurring atrocity crimes. With ethnic cleansing unfolding in Myanmar, a determined commitment to R2P could save the Rohingya’s lives.

How Has the U.S. Responded to the Crisis?

Having signed the 2005 World Outcome Document, which included text about the Responsibility to Protect, the U.S. has stated that it believes that each state has a responsibility to protect its citizens from genocide, ethnic cleansing, war crimes, and crimes against humanity. Further, if states are unable or unwilling to do so, the United States accepts that the international community has a responsibility to step in and protect those civilians.

In terms of the Rohingya crisis, according to a senior State Department official, “efforts by the United States on this crisis have focused first on ending the violence; second on ensuring a path for repatriation for those displaced; third, expanding access for humanitarian assistance and the media in Rakhine State; seeking accountability for reported atrocities; and supporting longer-term solutions for the root causes of tensions and conflict in Rakhine State.”

Although not specifically referencing R2P in statements and reports, the U.S. has implemented aspects of the doctrine as it responds to the crisis in Myanmar through talk, aid, and sanctions.

There has been a great deal of talk—as there always is—condemning actions, making expectations clear, expressing alarm, welcoming cooperation, and so on. One of the key strategies seems to be a focus on building strong communication with the fledgling democratic government in Myanmar. There has been an effort to sustain the young government, working with the new—though controversial—leader Aung San Suu Kyi. In his testimony to Congress, Patrick Murphy of the State Department noted, “It is in our interests, and those of the diverse populations of Burma, including the Rohingya, to see the new, elected government succeed.”

Additionally, the U.S. has been sending financial assistance to the region. During 2017, the U.S. government gave nearly $104 million in aid through the State Department and USAID to assist both internally displaced peoples and refugees—most of whom have ended up in Bangladesh. This is a good start, but will likely not be enough to sustain the hundreds of thousands of refugees. The flow of people continues, and the reality is that the Rohingya will not be able to safely return home in the near future. Thus, continued and substantial aid will be needed for years to come.

Lastly, the U.S. began implementing targeted sanctions. As a part of R2P’s efforts to stave off military intervention, targeted sanctions are among the strategies that can help minimize the movement and effectiveness of perpetrators. Thus far, the U.S. has implemented sanctions on Maung Maung Soe, former chief of the Burmese Army. Congress has asked for broader sanctions with the Burma Human Rights and Freedom Act (S. 2060), barring military assistance as well as some trade. To date, however, only the one military leader has been sanctioned.

In the statement from the State Department official, the U.S. government also expressed interest in facilitating the repatriation of the Rohingya. A deal to that effect was recently signed between the governments of Bangladesh and Myanmar, but it’s too soon and too dangerous. When asked about it at a press briefing, Heather Nauert of the State Department responded, “I can’t imagine that anyone would feel safe at this point in returning to their homes.”

Where is the Bold Leadership on Atrocity Prevention?

Why has the U.S. sanctioned only one member of the Myanmar military, someone moreover who is no longer in charge? Why is the U.S. not putting greater pressure on Aung San Suu Kyi, who refuses to protect, or for that matter even say the name of, the Rohingya? And where is the push for immediate protection of those Rohingya still living in Myanmar who have yet to flee?

Over the years, the U.S. government has tried to put into place atrocity-prevention mechanisms—most notably the Atrocity Prevention Board (APB). But where President Obama struggled to implement prevention strategies put forth by the APB, the current State Department has little interest in the body, preferring instead to consolidate and eliminate what it sees as excess, such as the Office of Global Criminal Justice.

Some in the U.S. government are committed to civilian protection. Representative James McGovern (D-MA) held what he hopes to be the first in a series of hearings on mass atrocity prevention on February 6, 2018. Experts such as Naomi Kikoler, deputy director of the Simon-Skjodt Center for the Prevention of Genocide at the U.S. Holocaust Memorial Museum, and Charles Brown, the managing partner for Strategy for Humanity, spoke about ongoing mass atrocities and how the U.S. government can better respond to them.

Rep. Jan Schakowsky (D-IL) and Rep. Randy Hultgren (R-IL) gave opening statements, but McGovern was the only member of Congress who sat and listened to the testimonies in their entirety. With the number of mass atrocity situations right now around the world—Syria, South Sudan, the Rohingya—this sort of hearing should be at the center of congressional attention. Instead, the room was full of congressional interns sent to take notes. Good on McGovern for holding these hearings, but he can’t do this alone.

The U.S. needs to start making atrocity prevention a priority—from Congress, to what’s left of the State Department, to the president.

The failure of R2P is not in the doctrine, but in the states that are unwilling to live up to their commitment to civilian protection. It is in cries of “Never Again!” followed by inaction as people suffer in some far off land. If the United States wants to be a world leader, it ought to start by being a world leader on atrocity prevention. The knowledge and the resources are there: what’s required is courage.

A great deal of the discussion from McGovern’s hearing focused on the failure to prioritize prevention specifically. Most people outside inner government circles only hear of R2P in the context of military intervention, but its creators meant for it to be used as a tool in the prevention of these crimes. The violence against the Rohingya was not a surprise; it was unfortunately predictable. Reports from December 2016 detail the military burning villages and raping women, and civilian fleeing for their lives, after the current offensive began on October 9, 2016. With the available resources and technology, lack of early warning is rarely a problem. The problem arises in responding to that information. The R2P report itself states, “lack of early warning is an excuse rather than an explanation, and the problem is not lack of warning but of timely response.”

Corrie Hulse is the managing editor of The Mantle and author of When We Let People Die: the Failure of the Responsibility to Protect. Photo: Displaced Rohingya mother (Wikimedia Commons).