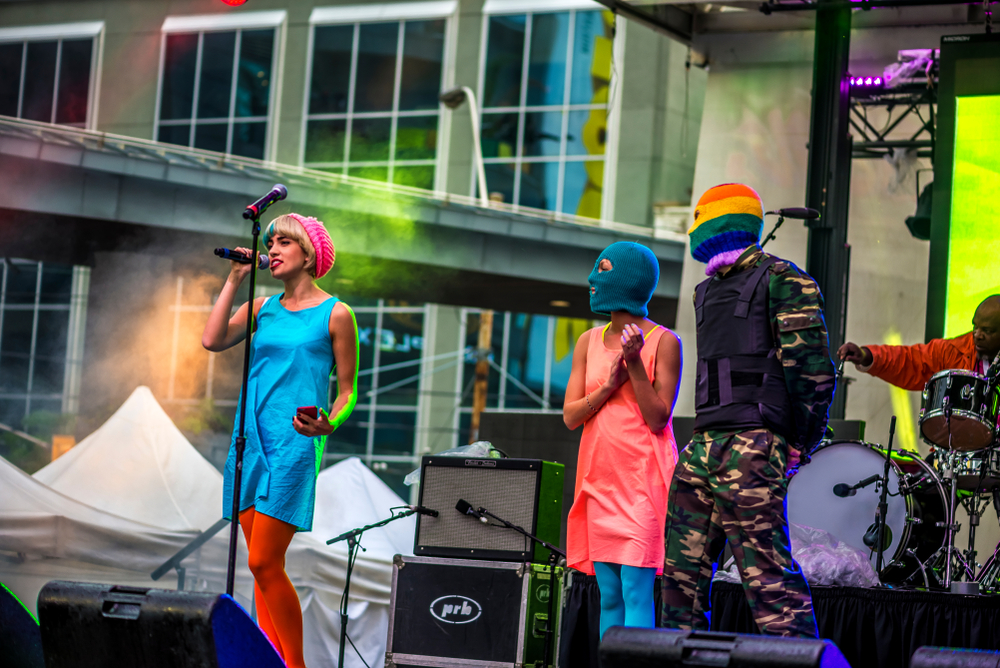 Russia Is Cracking Down on Political Performance Art. It Should Listen, Not Lash Out.

A flurry of prosecutions in recent months suggests that Russia is growing less tolerant of even peaceful protests against Vladimir Putin.
By Damelya Aitkhozhina | December 16, 2020

Performances by artists and activists on political topics have been a sensitive spot for the Russian authorities for years. But as the authorities’ crackdown on civil society intensifies, so does the creative non-violent response exposing and drawing attention to it.

This in turn increases the pressure authorities exert on the artists and activists in efforts to crush free speech. The flurry of prosecutions in recent months has made this clear.

On November 28, two women dressed in costumes like those worn by Snegurochka (“Snowgirl”), a companion to Russia’s version of Santa Claus, were on a central square in Moscow. With them was a man dressed as a riot police officer. He stood with his back to a lamp post while the women tied him up with packaging tape and signs reading “Careful, Fragile.”

The women were Pussy Riot activists Rita Flores (aka Margarita Konovalova) and Mariya Alyokhina, and the “policeman” was the artist Farkhad Israffili-Gelman. With them was a photographer, Gleb Kuznetsov.

They posted photographs of the event and tweeted, “Since July 2019 paper cups or plastic bottles became weapons, but the worst weapon against the people is a police state.” The performance referred to the 2019 “Moscow case,” in which several people faced serious criminal assault charges for throwing empty plastic bottles or cups toward the police. In December that year, President Vladimir Putin said that if prosecutions were not pursued for throwing plastic cups at police, things would escalate to rioting. The fragility of riot policemen became a running joke among political activists.

By December 3 of this year, police had detained all four artists.

They detained Flores at a hospital where she was seeking treatment for a medical condition. Her lawyer told me that on the way there, a plainclothes police officer attempted to get into the ambulance, claiming to be her acquaintance. Before that they stood guard outside her apartment over the weekend.

Alyokhina stated that before she and Flores were detained, somebody shut off the electricity in their apartments. While the others were released pending court hearings, Flores was detained overnight, charged with repeatedly violating public assembly rules and sentenced to 20 days in detention for this entirely peaceful protest performance.

Alyokhina, Flores, and Israffili-Gelman were also detained on November 4 and 10, apparently preemptively, when they put on the costumes they eventually used for the performance. Both times, they were detained before they did anything, and the police gave them no explanation. Their lawyer told me that later they were charged with an administrative infraction for not wearing masks and gloves in a public space, as required by the city’s COVID-19 rules, and that they were being tracked by the police, as police would appear in places they visited shortly thereafter.

A History of Persecutions

Apparently, the police see these artists and activists as so dangerous that it justifies this attention over real law and order problems.

Perhaps this is because on October 7, Pussy Riot put rainbow flags on several key government buildings in Moscow. Alyokhina explained that this action was for President Putin’s birthday, to make that day “LGBTQ visibility day.” One of their lawyers said that in subsequent days, 11 activists were detained. Most were released with a charge sheet for violating public assembly rules. But on October 9, a court sentenced one of them, Alexandr Sofeyev, to the maximum 30 days in detention for repeated violation of these rules. Three others, including Alyokhina, were fined.

On the same day, a left-wing activist, Vladimir Shulenin, left a “birthday present” for Putin at the presidential administration building. It was a mock certificate of appreciation “for maintaining poverty and dictatorship,” along with a pair of flippers and glue, apparently in reference to the Russian slang expression “gluing flippers,” meaning dying or death. He left the items next to the building’s entrance.

Shulenin’s lawyer, Mansur Gilmanov said that  the police claimed that he did not act alone and therefore considered his action a mass gathering, which requires advance authorization. On November 27, a court fined him RUB 15,000 (approximately $200) for violating public assembly rules.

In early November, Pavel Krisevich carried out a performance on a square across the street from the Federal Security Service (FSB) building in Moscow. He was covered in fake blood and tied to a cross, while other activists set files of criminal cases around him on fire. Reportedly, the paper was covered by chemical compounds burning at 40 degrees Celsius and was safe for him and others. Krisevich told the media  that his performance represented political prisoners. Shortly thereafter he was arrested and court sentenced him to 15 days in detention for noncompliance with police orders.

That was not his first performance related to political cases. Among other performances he staged, during the summer he put up a poster with images of vulvas in support of Yuliya Tsvetkova, a Russian artist and activist who is being prosecuted for posting a series of body-positive drawings of naked women on social media.

On December 1, the university Krisevich had been attending expelled him, referring to his November performance and stating that his actions “did not correlate with the moral character” of graduates. He intends to appeal. Prior to that he was attacked in a Saint Petersburg train station. Two men approached him and demanded that he kneel and apologize to them. When he refused, they threw antiseptic green dye in his face, which has become a common feature in vigilante attacks on critics in recent years. Krisevich stated that they identified themselves as “Orthodox Christian jihadis.”

In Samara, Karim Yamadayev, creator of the amateur web-series “Judge Graeme,” from Tatarstan, is on trial for “insulting authorities’ and “justifying terrorism” before a military court. He has been in detention since January 2019, when he was searched, interrogated, and detained for a video posted on YouTube. In the video he played a judge at a mock trial of Putin, the head of the state oil company Rosneft, and a presidential spokesperson, on charges of corruption and embezzlement. The video strongly implies that each defendant is executed off camera. The creators had a disclaimer that the video was an art project.

The video is undoubtedly distasteful to many, but to bring a criminal prosecution — much less terrorism charges, with a potential sentence of seven years in prison — is an egregious violation of freedom of expression. On December 2, his trial was suspended because Yamadayev is suspected to have contracted the coronavirus while in detention. Yamadayev was previously detained twice on charges of violating rules on public assemblies when he created an installation with a grave of Putin and headstones symbolizing the death of opposition. He served over a month in detention for that offense.

In a rare demonstration of at least some common sense, in November an appeals court in Perm suspended the remaining prison time for Alexander Shabarchin. In August, a court had sentenced him to two years in prison and another activist to a suspended sentence for hooliganism after they put up a doll with Putin’s face and signs reading “Liar” and “War Criminal.”

It was an entirely peaceful act that posed no danger or harm to anyone. The court ruled that it amounted to public humiliation of Putin. And although neither of these young men remain behind bars, both have criminal records that may have a negative impact well on their future.

These graphic political performances are symptoms of pent-up public frustrations. It would be smarter for the authorities to listen to people’s critical voices, especially the distressed ones, even when they are expressed through controversial performance. Even if the authorities don’t want to listen, they have an obligation under international law to respect freedom of expression, and not lash out.

Damelya Aitkhozhina is a Russia researcher at Human Rights Watch.