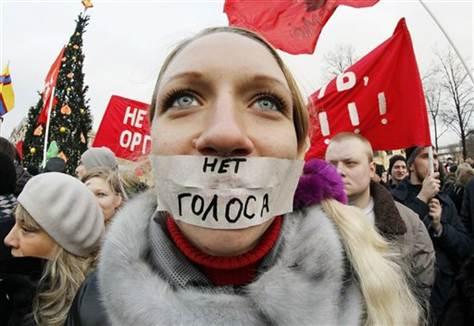 Russians are coming out onto the streets to transform their country once again.
By Dimitar Indzhov | December 23, 2011 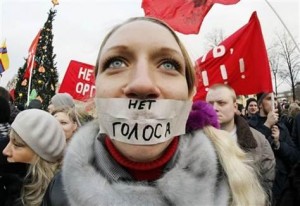 In the past two weeks a number of different rallies took place in Russia. The most memorable of these, on December 10, was the biggest protest in Russia since the fall of communism. People in cities all around Russia went onto the streets. In Moscow, estimates of the number of protestors ranged from 25,000 to 100,000.

Although organized by a range of groups and political parties with few common goals, the protests are united around one issue: the alleged vote rigging by the United Russia party. The Russian election-observer Golos identified 5,300 allegations of electoral violations. International observers also judged the elections fraudulent. Concerned citizens took 18 videos of people stuffing ballot boxes with votes for United Russia and uploaded them onto YouTube.

After 12 years of Putin rule, the gap between rich and poor widened, while economic growth and living standards stagnated. The Russian economy needs modernization, but the government has made little effort to make these improvements. The main pivot of the Russian economy is energy resources. Natural gas and petrol account for two-thirds of Russian exports. Much of the remaining one-third consists of chemical fertilizers, which are made primarily from natural gas. A big part of what Russia imports in turn is food, which accounts for 30 percent of the food market in Russia.

The biggest problem with exporting natural gas is that only one company, Gazprom, deals with the extraction and sale of this material. The Gazprom monopoly means that only a handful of people reap the benefits from Russia’s foreign trade. True, the state owns a big part of Gazprom, so the general population does get a trickle of profits. But the big profits remain in the hands of the few.

Dimitry Medvedev’s occupation before he became president of Russia was chairman of the board of directors of Gazprom, a position he got directly from Putin. In fact, Putin fired the previous chairman in order to make space for Medvedev and subsequently appointed Medvedev’s successor as well. Putin’s influence does not stop there but extends to all key positions of the energy giant.

Putin’s party also helped Gazprom become the world’s largest energy extractor. In 2006, the Duma gave exclusive rights to Gazprom for the export of natural gas. Gazprom’s monopoly, in other words, is guaranteed by legislation.

Besides controlling an energy giant with unlimited resources, Putin also has worked to defend the rich business people – what the Russians call “oligarchs” — instead of the ordinary people. A bill on progressive taxation in the Duma proposed that the oligarchs pay more than the flat rate of 13 percent that applies to all people. The bill never stood a chance with United Russia’s majority in government.

Is This a Democracy?

Economic problems have galvanized Russians, who have become more critical of their government. Putin’s tight grip on power and money and his protection of the oligarchs has consequently come under increased scrutiny. The general population has not benefitted much from the one man/party rule, and the recent demonstrations suggest that average people want a more democratic government in which they have greater voice.

Many of the protesters on the street demand a release of political prisoners. Although nominally a free democratic country, Russia still has political prisoners. Political activism is not tolerated in Russia, and activists are often detained on trumped-up charges. In the very first protest against the allegations of fraud, on December 5, many activists ended up in jail, including prominent figures who oppose the current government like blogger Alexei Navalny and opposition leader Ilya Yashin. These arrests and the overall crackdown on protesters resonated so strongly with Russians that the larger protests on December 10 could be understood in part as a reaction to these earlier arrests.

State control over the media is another major point of discontent. The three main TV channels in Russia are all run by the state and take their orders from the Kremlin. NTV used to be the only independent TV channel in Russia to show unbiased news, but during Putin’s rule Gazprom took over NTV. Not only TV channels, but also magazines and newspapers have to follow the directions of the Kremlin. The magazine Vlasty dared to publish an article critical of Putin, and as a consequence its two senior editors were fired. Journalists even worry about being murdered. One example is Anna Politkovskaya, a critic of Kremlin policies, who was murdered in 2006; all suspects were acquitted. More than a dozen of journalists have been killed in Russia over the past 20 years.

What Can Be Done?

In response to the protests, the two leaders of the country Vladimir Putin and Dmitry Medvedev made their respective proposals to calm the people’s anger. Medvedev ordered an investigation into the elections. The head of this investigation will be the head of the Electoral Commission, Vladimir Churov. In an interview with Euronews, Churov says that he is confident that the vote was legitimate, stating further that “we have absolute freedom and democracy.” If his day job didn’t disqualify him from heading up the investigation, these statements should.

Vladimir Putin has proposed that cameras be installed at polling stations. But even with cameras, elections can be rigged, for instance by the government discouraging people from voting in the first place.

The opposition, though it will continue to run in the elections, might not be committed to challenging the status quo. The independent newspaper The Moscow Times interviewed a high-ranking elections official who claims that three parties made a deal with United Russia and that they are “pretending to play the opposition.” The official further adds “Some of them seem to be real opposition, but it is not like that. The truth is that they don’t want to win. They are acting like they are taking part in real elections.”

Recently a new figure appeared on the Russian political scene. Mikhail Prokhorov, the third richest man in Russia and owner of the New Jersey Nets, announced that he will run for the presidency. This appears to be an alternative to Putin, which may attract support from the protesters. Still, it is uncertain whether Prokhorov will be any real threat to Putin’s power. All opposition passes through a careful Kremlin filter before it reaches the electoral list, and Prokhorov likely went through the same process. Ian Bremmer has suggested in his blog for Reuters that Prokhorov owes his fortune to Putin’s rule, and therefore most likely he will be his puppet. Prokhorov has already said that he will not spend much time on attacking Putin, which further shows he may be weak opposition.

On December 22, Medvedev made his final state of the nation speech. This was a major breakthrough promising unprecedented changes. He proposed the creation of an independent TV channel. He called for reforms that would bring simpler procedures for registering political parties and thus allow for a wider array of political opinions. Medvedev said that he thinks it is right for government officials to report their main expenditures, which would help curb widespread corruption. Perhaps the most important proposals concerned the decentralization of the state’s power, which would leave the president with less influence. Under Putin, the Duma passed a law that the president directly appoint all local governors. Medvedev proposed that the regions should now choose their own governors by elections and that the regions will have more control over their budgets. All of these proposals go right to the heart of the protester’s demands.

If Russian politicians stand by these changes, the protesters will have won a great victory. Still, one demand remains unanswered: a full recount or new elections. The message is clear. United Russia is going to concede to some demands, but it will still cling to power and Putin is going to run for his third presidency next year. The next protest is scheduled for December 24. Up to 50,000 Russians have already indicated through social networks that they will attend, which suggests the biggest protest so far.

Something new is emerging in Russia. Many of the protesters have come out on the streets for the first time in their lives. They made the first step, raised their voices, and are no longer imprisoned by fear.