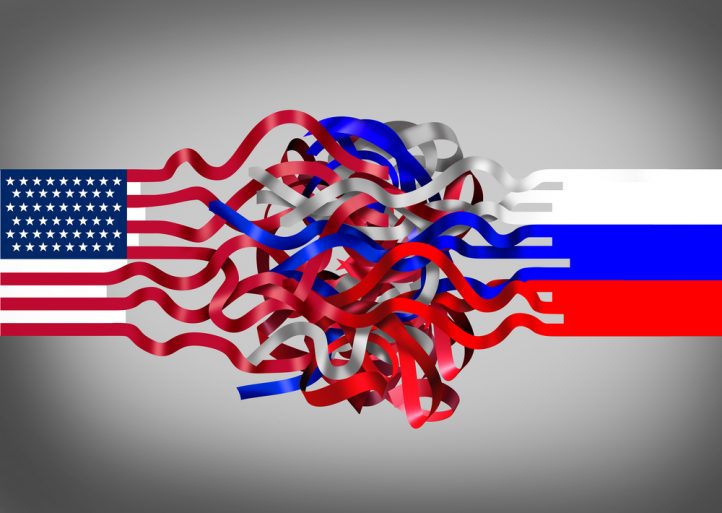 In this country, reactions to the Mueller report have been all-American beyond belief.

Let’s face it, when it comes to election meddling, it’s been me, me, me, 24/7 here. Yes, in some fashion some set of Russians meddled in the last election campaign, whether it was, as Jared Kushner improbably claimed, “a couple of Facebook ads” or, as the Mueller report described it, “the Russian government interfer[ing]… in sweeping and systematic fashion.”

But let me mention just a few of the things that we didn’t learn from the Mueller report.

We didn’t learn that Russian agents appeared at Republican Party headquarters in 2016 with millions of dollars in donations to influence the coming election. (Oops, my mistake! That was CIA agents in the Italian election of 1948!)

We didn’t learn that a Russian intelligence agency in combination with Chinese intelligence, aided by a major Chinese oil company, overthrew an elected U.S. president and installed Donald Trump in the White House as their autocrat of choice. (Oops, my mistake again! That was the CIA, dispatched by an American president, and British intelligence, with the help of the Anglo-Persian Oil Company, later BP. In 1953, they overthrew Mohammad Mossadegh, the elected prime minister of Iran, and installed the young Shah as an autocratic ruler, the very first — but hardly the last — time the CIA successfully ousted a foreign government.)

We didn’t learn that key advisers to Russian President Vladimir Putin were in close touch with rogue elements of the U.S. military preparing to stage a coup d’état in Washington, kill President Barack Obama in a direct assault on the White House, and put the head of the Joint Chiefs of Staff in office. (Sorry, again my slip-up and full apologies! That was President Richard Nixon’s adviser Henry Kissinger in contact with Chilean military officers who, on September 11, 1973 — the first 9/11 — staged an armed uprising during which Salvador Allende, the democratically elected socialist president of that country, died and army commander-in-chief Augusto Pinochet took power.)

We didn’t learn that, at the behest of Vladimir Putin, Russian secret service agents engaged in a series of plots to poison or in some other fashion assassinate Barack Obama during his presidency and, in the end, had at least a modest hand in encouraging those who did kill him after he left office. (Oh, wait, I was confused on that one, too. I was actually thinking about the plots, as the 1960s began, to do in Congolese Prime Minister Patrice Lumumba.)

Nor, for that matter, did we learn that the Russian military launched a regime-change-style invasion of this country to unseat an American president and get rid of our weapons of mass destruction and then occupied the country for years after installing Donald Trump in power. (Sorry one more time! What I actually had in mind before I got so muddled up was the decision of the top officials of President George W. Bush’s administration, in the wake of the 9/11 attacks, to launch a “regime-change” invasion of Iraq in 2003, based on fraudulent claims that Iraqi despot Saddam Hussein was developing weapons of mass destruction, and install a government of their choice in Baghdad.)

No, none of that happened here. Still, even though most Americans might find it hard to believe, we weren’t exactly the first country to have an election meddled with by an intrusive foreign power with an agenda all its own! And really, my examples above just begin an endless list of events the Mueller report didn’t mention, ones that most Americans no longer know anything about or we wouldn’t have acted as if the Russian election intervention of 2016 stood essentially alone in history.

I don’t, however, want that to sound like blame. After all, if you lived in the United States in these years and didn’t already know the secret history of American intervention and regime change across the globe from the end of World War II to the collapse of the Soviet Union, you could be forgiven for thinking that never had anyone done anything quite so dastardly as did the Putin regime in attempting to hack and alter the results of an American election.

In the media, that Russian intervention has (with the rarest of exceptions) been covered as if it were an event unique in history. Admittedly, whatever the Russians did do in 2016 to lend a hand to Donald Trump, they didn’t plan a coup d’état; it wasn’t an assassination attempt; and it wasn’t, in the normal sense, what has come to be known as “regime change.”

A World of Chaos Without End

Let’s start with one thing that should have been (but wasn’t) obvious since the first reports on Russian meddling in the election campaign of 2016 began to appear. Historically speaking, such a plan fits well with a classic Russian tradition. As scholar Dov Levin discovered in studying “partisan election interventions” from 1946 to 2000, the Russians — or the Soviet Union until 1991 — engaged in a staggering 36 of them globally.

If, however, you jumped to the conclusion that such an impressive cumulative figure gave the Russians the world’s record for election meddling, think again. In fact, it left them languishing in a distant second place when it came to interfering in other countries’ elections over more than four decades. The United States took the crown with, by Levin’s count, a distinctly imperial 81 interventions! (USA! USA!)

Put another way, the two Cold War superpowers together meddled in approximately “one of every nine competitive elections” in that era in at least 60 countries covering every part of the planet but Oceania. Moreover, only seven of them were in the same election in the same country at the same time.

And elections are but one part of a story of meddling on a scale that has been historically remarkable. In her book Covert Regime Change, Lindsey O’Rourke notes that between 1947 and 1989, a span of nine Cold War-era American administrations, the least number of “U.S.-backed regime-change attempts” per president was three (Gerald Ford’s administration), the most 30 (Dwight D. Eisenhower’s). Harry Truman’s administration came in second with 21, Lyndon Johnson’s third with 19, Ronald Reagan’s fourth with 16, John F. Kennedy’s fifth with 15, and Richard Nixon’s sixth with 10.

And keep in mind that, while such numbers remain unprecedented, despite a number of short-term successes from Iran to Guatemala, this was not generally a notable record of success in remaking the world in the image Washington desired. Many of those regime-change attempts, especially against countries in the Soviet bloc, failed dismally. Others created chaos or regimes that not only did their citizens little good but didn’t end up doing much for Washington either. Still, that didn’t stop one administration after another from trying, which is why the numbers remain mind-boggling.

And then the Soviet Union imploded and there was but a “sole” superpower left on Planet Earth. Its leaders had no doubt that its ultimate moment had come and it was to be no less than “the end of history”! The planet was obviously Washington’s for the taking. No more need for subterfuge, subtle election meddling, secret support for dissidents, or even covert regime change, not when the only opposition to an American planet was a few weak “rogue states” (think: the “axis of evil,” also known as Iran, Iraq, and North Korea), a desperately weakened and impoverished but still nuclear-armed Russia, and a modestly rising future power in Asia.

And then, of course, came 9/11, that staggering act of blowback — in part from one of the great “successes” of CIA covert action in the Cold War, the decisive defeat of the Red Army in Afghanistan thanks to the funding and arming of a set of extremist Islamist militants, a war in which a young Saudi named Osama bin Laden gained a certain modest reputation. On that day in 2001, the last superpower, the one exceptional nation, became the planet’s greatest victim and all hell was let loose (just as bin Laden hoped it would be).

In response, in a world without other superpowers, the country with, as one president proudly put it, “the finest fighting force that the world has ever known” no longer needed to meddle secretly (or at least in a fashion that allowed for “plausible deniability”). With the invasion of Afghanistan that October, open regime change became the order of the day. Iraq would come in 2003, Libya in 2011. The U.S. Air Force and the CIA’s drones would bomb and missile at least seven countries across the Greater Middle East and North Africa repeatedly in the years to come, helping reduce great cities to rubble, uprooting and displacing massive numbers of people, creating failed states galore, and setting in motion forces that, from Pakistan to Syria, Yemen to Niger, would in turn unsettle a significant part of the planet.

And, of course, it would all prove to be a militarized failure of the first order. And yet, with a potential new conflict ramping up in Iran and the U.S. still fighting in Afghanistan almost 18 years later, America’s wars show little sign of winding down. Only recently, for instance, the chairman of the Joint Chiefs of Staff assured a group of senators that the American military would “need to maintain a counterterrorism presence as long as an insurgency continues in Afghanistan,” which should be considered the very definition of a forever war. Think of it as a world of chaos without end and now consider again that Russian meddling in an American election.

By the way, whatever the Russians did in 2016 (or may do in the future to American or other elections) is deplorable and should be denounced, no matter how slapdash it might have been. After all, as Dov Levin discovered, it doesn’t necessarily take much to affect the result of an election in another country. Here’s his conclusion for election meddling in the Cold War era:

“I find that an electoral intervention in favor of one of the sides contesting [an] election has a statistically significant effect, increasing its vote share by about 3%. Such an effect can have major ‘real life’ implications. For example, such a swing in the vote share from the winner to the loser in the 14 U.S. presidential elections occurring since 1960 would have been sufficient to change the identity of the winner in seven of these elections.”

As we all know, a 3 percent shift in the 2016 election in several states would have made a staggering difference. After all, as the Washington Post reported, in Michigan, Pennsylvania, and Wisconsin, Donald Trump beat Hillary Clinton by “0.2, 0.7, and 0.8 percentage points, respectively — and by 10,704, 46,765, and 22,177 votes. Those three wins gave him 46 electoral votes; if Clinton had done one point better in each state, she’d have won the electoral vote, too.”

So the issue isn’t faintly whether Russian electoral meddling was despicable or not. The issue is that it’s been covered here, like so much else has in this century, as yet another case of American exceptionalism (but never narcissism). As on 9/11 — forget that first 9/11 in Chile — we eternally stand alone in our experiences because, by definition, we are the special ones, the ones who matter.

In the case of election meddling, however, this country just joined a moiling crowd of the interfered with — and largely by us. It was a classic case of getting a taste of one’s own medicine and not liking it one bit. It should have taught us a lesson about our own global behavior since World War II. Instead, it’s simply continued us on a path of exceptional meddling that will prove someday to have been one of the great follies in history.

Tom Engelhardt is a co-founder of the American Empire Project and the author of a history of the Cold War, The End of Victory Culture. He runs TomDispatch.com and is a fellow of the Type Media Center. His sixth and latest book is A Nation Unmade by War (Dispatch Books).