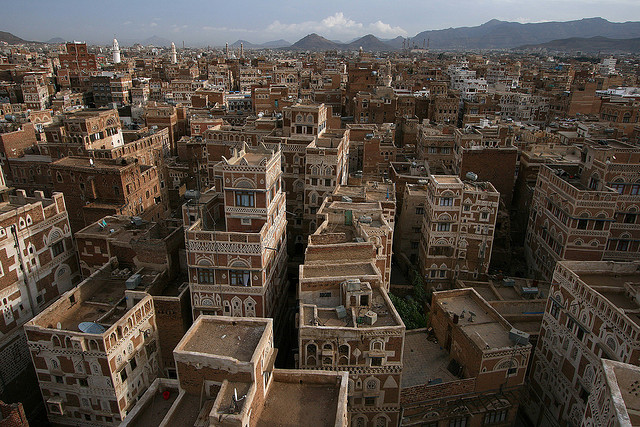 The Saudis are wreaking wholesale destruction in Yemen.
By Russ Wellen | August 6, 2015

No American (okay, Canadian) journalist is doing more important — not to mention intrepid — reporting from the Middle East than Matthieu Adkins. For his latest piece for Rolling Stone, Yemen’s Hidden War, he ventured into Yemen and observed the effects of the U.S.-abetted Saudi offensive against the Houthis — and thus everybody else — in Yemen. The Houthis seized power from Abdu Hadi, the successor to long-time president Ali Abdullah Saleh, who was forced out by mass demonstrations. Apparently their main sin to the Saudis is that they’re a denomination of Shi’ite and may be supported by Iran, about whom the Saudis are touchy these days to the point of paranoia.

In their bombing (using American aircraft and with intelligence and targeting help from the United States), the Saudis have been about as discriminating as the Israelis in Gaza (in other words, not). Meanwhile, writes Adkins:

International funding for aid has been slow to arrive to Yemen. When the U.N. issued a “flash appeal” for $274 million in aid in April, the Saudi government immediately pledged the entire amount. As of mid-July, none of the money had been delivered. “When the Saudis committed right off the bat, it made a lot of other donors relax the urgency on their contributions,” says an official in charge of an international agency operating in Yemen. “Everyone’s wondering if this is what the Saudis intended, or if they simply committed all the money without realizing they would not be in charge of where it went.”

Adding insult to injury like this is reminiscent of the “double tapping” carried out by U.S. drone strike operators, especially in Waziristan, Pakistan. Actually, the Saudis practiced a form of this again. Adkins again:

On June 3rd, they say, an airstrike had hit several houses. Then, as the villagers worked to free victims from their collapsed homes, another wave of strikes had hit them. Betal arrived in an ambulance; he says the locals were hysterical and afraid to go back to try to rescue anyone. In all, they say, eight houses had been destroyed and 51 people killed. They produce a list of names with ages next to them — 36 of the victims were children.

The biggest constraint on aid, however, remains the Saudi coalition’s blockade of Yemen’s airports, borders and shipping. Critics in the humanitarian community say it amounts to the collective punishment of an entire nation, and an example of siege warfare against civilian populations that is forbidden under international law.