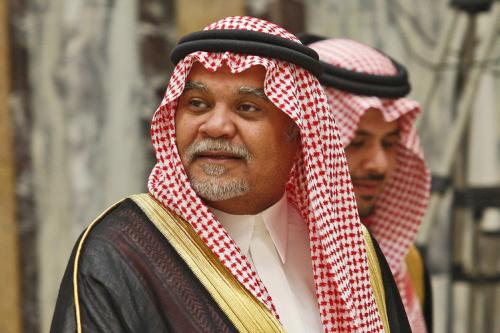 Saudi Arabia’s Temper Tantrums and What They Mean for the U.S.

Why did Saudi Arabia spurn the seat on the UN Security Council it finally won?
By Sina Toossi | October 31, 2013

Saudi Arabia recently rejected a coveted seat on the U.N. Security Council it had campaigned for over two years to get. The sense of surprise in the policy analysis world has been palpable, with analysts scratching their heads trying to understand why the oil-rich monarchy would turn down one of the most prized seats in all international relations.

The Saudi rejection has been seen as especially shocking as it comes at a time when Saudi Arabia would have seemingly benefited immensely from being able to play an instrumental role in shaping international positions on Syria and Iran.

Some analysts have suggested that this is simply another manifestation of the Saudis long preference for maintaining “quiet diplomacy,” characterized by not taking public positions on various regional and world issues.

However, the more prevailing consensus among analysts and regional observers seems to be that the Saudi move is primarily meant as a signal of disapproval over U.S. policies in the region.

David Ignatius of the Washington Post has said the Saudis are angry over Washington’s “dumping President Hosni Mubarak in Egypt, backing the Muslim Brotherhood’s Mohamed Morsi, opposing the coup that toppled Morsi, vacillating in its Syria policy, and now embarking on negotiations with Iran.”

In an unprecedented move, Saudi intelligence chief Prince Bandar bin Sultan has since publicly reprimanded the United States. According to Al-Jazeera, Sultan explained before an audience of European diplomats that the rejection of the Security Council seat was meant as a message of Saudi disapproval with U.S. positions in regards to Syria, the Israeli-Palestinian conflict, Iran, and Bahrain.

He further said that, as a result of these differences, Saudi Arabia will make a “major shift” in its relations with the United States.

It is clear that Saudi Arabia increasingly fears it is on the losing side of a wider Middle Eastern power struggle. Indeed, since the 2003 U.S. invasion of Iraq, the Saudis have viewed the regional power structure as tipped against them. Saddam Hussein was certainly no friend to the al-Sauds, but the threat he posed to them had been contained since the 1991 Persian Gulf War. The Hussein government’s continued survival benefited the Saudis as it had remained a critical check on Iran’s regional influence.

The U.S. invasion and subsequent overthrow of the Baathist Iraqi regime in 2003 totally collapsed this regional power framework. Not only could the Saudis no longer rely on Iraq to contain Iranian influence, but Iraq had essentially been handed over to Iranian-backed Shia parties. As a result, Saudi Arabia has been doing everything it can to combat rising Iranian influence and restore the pre-2003 balance of power.

Recent regional developments—such as the United States choosing to not attack Syria and instead opting for a Russian-brokered plan to dismantle Syria’s chemical weapons, as well as signs of a possible “grand bargain” between the United States and Iran—have clearly deeply troubled the Saudi ruling family.

Naturally, the Saudis want to maximize their sense of security and sphere of influence in the region. However, it is clearer every day that their interests and methods of securing them are not always in line with those of their chief patron and protector—the United States.

As Saudi Arabia expert Gregory Gause of Brookings has said, it is a “mistaken belief of many, more in the U.S. than in Saudi Arabia, that the de facto alliance is built on a complete complementarity of interests.”

It may very well be that it is in the interest of the United States to pursue strategies vis-à-vis Iran and Syria or elsewhere that do not correspond with Saudi desires. In such cases, the U.S. should place its interests first and, while keeping an ear open to the Saudis, understand that it is highly unlikely there will be serious repercussions for its relationship with Saudi Arabia.

As Gause says, Saudi Arabia is the “much weaker partner in the partnership.” The Saudis need the United States much more than the United States needs them. While the Saudis have signaled that awarding them a UN Security Council seat will not placate their strong sense of disapproval of U.S. policies in the region, there is ultimately not much they can do but accept it.