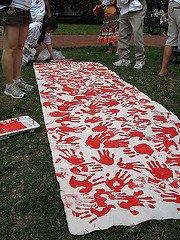 Banner of hands for Darfur, from September 9, 2006 rally in Washington, DC. Courtesy of Genocide Intervention Network.

The United States has substantial ties with the Sudanese government. However, buoyed by a large grassroots movement to “Save Darfur,” Washington has also strongly condemned Khartoum for the crisis in the beleaguered region. The contradiction is striking – on one hand, the United States highly prizes Khartoum for its key role in intelligence-sharing in the supposed “War on Terror,” yet simultaneously Washington has taken the lead in declaring (for domestic political reasons) that the Sudanese government is carrying out “genocide” in Darfur. Adding fuel to the fire, Sudan is an area of great strategic interest to the United States, as it seeks to both prevent the consolidation of Chinese influence in Africa and gain control over Sudan’s substantial oil reserves.

It is within this framework of contradictory posturing and less than humanitarian U.S. geopolitical motives that the activist movement addressing Darfur operates. Spearheaded by the “Save Darfur Coalition,” a collection of high-profile human rights and civil society groups, much activism has been dedicated to prodding Washington into action, generally through supporting the deployment of UN “peacekeeping forces”; some commentators have called directly for “humanitarian intervention” in Darfur. Yet given the strategic and hegemonic interests at stake for the United States in Sudan, salient questions arise about how activists can circumvent Washington’s machinations and pursue a truly humanitarian agenda.

Concerns about the Coalition

For its part, the Save Darfur Coalition has often legitimated concerns that it is patently unaware or even supportive of Washington’s plans for the region, and ignorant of fundamental issues of the conflict. Most prominently, the Coalition has at times been guilty of sidetracking Darfurian and Muslim activists, describing the conflict in harshly oversimplified ethnic terms, receiving official sanction from and doling out praise to the Bush administration, and failing to consider Washington’s potential interest in a UN deployment or “humanitarian intervention” – or the potentially dangerous outcomes of such actions. The very size and prominence of the movement is a reflection of its political harmony with centers of power in the United States. Accordingly, while doing much to propel this humanitarian catastrophe onto the national radar, the movement as a whole has demonstrated considerable myopia in both its actions and rhetoric.

This is not to say, however, as suggested by the tone in some left-wing commentary, that just because many Darfur activists have a naïve credence in U.S. benevolence and fail to recognize that Washington clearly has ulterior motives at stake, that the question of aiding Darfurians should be tossed aside. As the commentator Justin Podur summarizes,

The real world demands not allowing genuine concern for victims of atrocities to be transmuted by interventionist hypocrites into apologetics for an imperialism that will ultimately produce more victims of more atrocities. But those same victims deserve better than mere denunciations of intervention and its apologists as hypocrites and warmongers.

There are several measures that can be taken with minimal danger of promoting U.S. foreign policy objectives.The extent to which these steps have not been pursued is itself a clear indication of how much substance lays behind Washington’s fiery rhetoric on Darfur.

To take but the most elementary point of departure, one would expect that if actually concerned with Darfur, the United States and the rest of the West more generally would shower humanitarian funds onto the aid organizations operating in the region. This, of course, is consonant with the wishes of Darfur activist groups, and is the bare minimum that could be expected of the munificent leaders of Western Civilization, renowned as they are throughout commercial media and our intellectual culture as committed to alleviating suffering around the globe. Returning to Planet Earth, one finds the relief agencies in a similar situation to the Darfurian people – teetering on the edge of collapse. Due to insufficient financial support, services to displaced victims such as health care have been restricted, “Feeding centers have had to be closed, food cannot be distributed, staff are being reduced, [and] teachers in camps are no longer being paid.” At one point, the World Food Program was forced to cut its food rations in Sudan by half, due to funding shortages – especially serious since the UN estimates that there are some four million Darfurians “in need of aid to survive.”

As frequently recounted in the press, the UN and the West, led by the United States, are at an impasse with Khartoum over its refusal to allow in a force of around 20,000 UN peacekeepers. (Though the latest news is that Sudan has assented to a joint UN-AU force of 17,000-19,000 troops, Khartoum’s repeated history of obstructing the implementation of agreements warrants considerable skepticism of this development) Tellingly, less noted has been the West’s position towards the African Union (AU) forces already on the ground in Darfur. Again, if the heated rhetoric from Western capitals contained any meaningful shreds of reality, the AU troops shouldS enjoy boundless support–especially from those declaring “genocide” in the region.

Yet instead of being met with jubilation and generosity by Western leaders, the AU’s own call for its forces to be increased to 21,000 have been greeted by silence, beyond empty moral platitudes, a demonstration of how seriously Darfurian lives are taken in the West. Further exposing the hypocrisy, the former UN Special Representative of the Secretary-General in Sudan, Jan Pronk, has made the common sense request for the international community to use the funds that would be spent on a UN force – he estimates between $1 billion and $1.5 billion to aid the AU peacekeepers. Again, such proposals are studiously ignored, once more demonstrating Washington’s unwillingness to actually aid Darfurians.

For its part, the larger Save Darfur movement has generally failed to emphasize this issue of fully funding the AU, demanding more prominently a UN deployment, or, as some have urged, a “humanitarian intervention.” Yet such advocacy fails to account for several key realities, even beyond the stark implausibility of the United States supporting international action for non-selfish motives.

Even if well-intentioned, it is entirely possible that an intervening force would cause more harm than it could potentially alleviate, especially given Khartoum’s disapproval of its deployment, and the possibility of an insurgent movement rising against it. Crowds of Sudanese have demonstrated against a UN presence, and the contention that UN forces would turn Sudan into “another Iraq” resonates strongly in the region for reasons that should be clear, with Pronk noting that many in Khartoum fear that al-Qaida would be drawn into the country.

Indeed, disaster scenarios are not difficult to imagine. Gareth Evans, president and chief executive of the International Crisis Group, observes that “On all available evidence, a ground invasion would not only be a nightmare to effectively implement, but would lead to the collapse of the extremely fragile north-south CPA [Comprehensive Peace Agreement], and make impossible the work of the humanitarian agencies in Darfur”–an outcome with potentially catastrophic consequences.

This conception of a UN presence in Sudan also ignores a fundamental element in this, or any “humanitarian” mission–that sending in troops might stabilize the situation, but without a working political agreement to enforce it will not necessarily lead to any sort of just, long-term outcome to the underlying issues. For example, Pronk, who was ordered to leave the country by Khartoum in October 2006, rightly comments that a “Military presence in order to keep the peace is a condition, not a solution in itself.”

Aside from the Darfur Peace Agreement (DPA), which was heavily backed by the United States and deeply unpopular amongst Darfurians, remarkably little interest has been shown in developing a political solution by the United States, nor the Save Darfur movement, which has instead latched onto its cure-all of UN troops. Commenting that those seeking an intervention “are suffering from a salvation delusion,” Alex de Waal, a fellow of the Global Equity Initiative at Harvard and a director of Justice Africa, London, criticizes the framing of the entire debate about Darfur, arguing that: “A political settlement has been completely overlooked or downplayed by the U.S…The whole debate has gone off on a red herring—UN troops.”

Darfurians deserve better than a potentially ill-conceived UN intervention, which may plunge the region into further chaos and serve as a vehicle for U.S. geopolitical interests. Their suffering also merits more than the crocodile tears being shed by Washington, or an activist movement which has done much to bring attention to Darfur but has largely failed to realize that a Western-backed force would not be equivalent to “the armed wing of Amnesty International.”

Other Paths to Pursue

In addition to funding relief organizations, which is evidently of less importance to Washington than saber rattling, there are other paths to pursue, if one cares to seek them. Activists must push the West to support negotiations between Khartoum and Darfurian rebel groups, instead of advocating an agreement such as the DPA that does not reflect popular demands.

Pressure should be applied on rich countries to compel them to grant asylum to Darfurian refugees. Washington should be obliged to pay reparations to the people of Sudan for bombing the al-Shifa pharmaceutical plant in 1998, an attack which killed perhaps “several tens of thousands,” and supporting Khartoum in the 1980s as it waged a bloody civil war that would claim over two million lives.

Finally, the West cannot be allowed to continue hampering the AU forces in Darfur; these troops require full funding, a broadened mandate, and a proper opportunity to halt the violence in the region – not to be completely sidelined for the “red herring” of UN troops. The fact that these steps have not been taken is sufficient to understand Washington’s true position vis-à-vis Sudan–a reality that should not be lost on Darfur activists.

Steve Fake, Kevin FunkSteve Fake and Kevin Funk are social justice activists who are currently writing a book about Darfur. They maintain a blog with their commentary at http://confrontingempire.blogspot.com/. They are contributors to Foreign Policy In Focus (www.fpif.org).