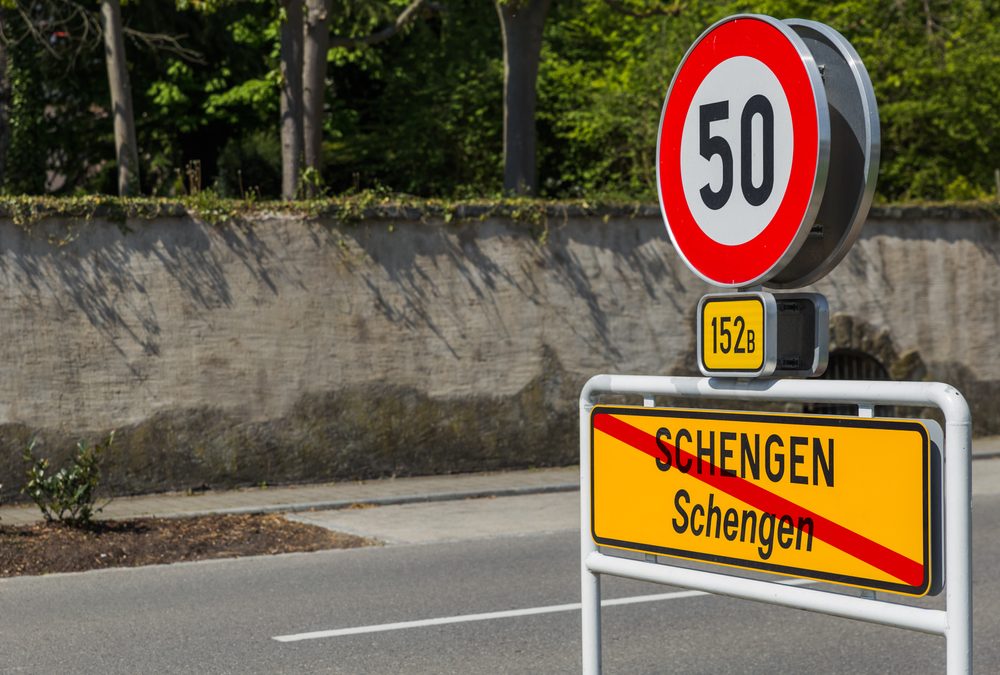 Why is Croatia being welcomed into an exclusive European club but Bulgaria and Romania aren't?
By Mira Oklobdzija | December 12, 2022

Most people, openly or otherwise, approve of the borders that prevent foreign elements from entering their comfort zones. At the same time, they dislike frontiers which prevent them from reaching, as quickly as possible, nice locations they want to visit.

In November, the European Parliament cleared the way to admit Croatia, Bulgaria, and Romania into the Schengen area, the group of European countries that have abolished internal visa controls. On December 8, the EU Council approved the enlargement of the Schengen space and made at least the beautiful beaches of Croatia easily accessible, finally without tedious border controls. Romania and Bulgaria will have to wait longer because—as the Dutch and Austrians persistently remind everyone—the levels of corruption, prevalence of organized crime, and problems with border surveillance are still omnipresent there. And to be blunt, their beaches on the Black See are not so much in demand right now.

But there are good reasons to be skeptical of Croatia’s admission ahead of Bulgaria and Romania.

Croatia is led by the conservative, center-right party Croatian Democratic Union, which still has not managed to break with the ways of its founding father Franjo Tudjman. Nationalism, revisionism, and lack of tolerance are alive and well in the country. Hate speech can be prosecuted, but it doesn’t happen very often. The persistent myths about good Croats and bad “others” (mostly Serbs) present a serious obstacle to dealing with the past. According to the UNHCR, only half of approximately 250,000 people of Serbian origin that left the country in 1995 have managed to return. Prosecuting war crimes committed during the Homeland War is very slow.

Nor have problems concerning today’s refugees been resolved. According to Amnesty International’s 2021 report, Croatia has continued to deny  thousands of potential asylum seekers access to asylum. Aid organizations have documented around 10,000 cases of pushback and collective expulsion, and numerous instances of violence and abuse, while NGOs maintain that violent pushback from the country’s borders is widespread and systemic. Croatia has consistently denied any wrongdoing.

Over the years, EU institutions have repeatedly turned a blind eye to overwhelming evidence of systemic human rights violations at EU external borders, including Croatia, and rewarded heavy-handed tactics that fortified borders and prevented people in search of protection from entering the EU at any cost.

What is unfolding at Croatia’s and other EU external borders is a rule of law crisis in which fundamental rights violations, including of the right to asylum, are met with widespread impunity… The Council of Europe Committee for Prevention of Torture noted that Croatia’s Interior Ministry dismisses nearly 90 percent of all complaints of police misconduct.

These heavy-handed tactics on the borders of Croatia have apparently paid off. Acceptance into the Schengen area seems like a “thank you” from the rest of Europe for turning away so many migrants.

The Dutch Parliament is focused on the blooming corruption in Romania and Bulgaria. But the Croatian situation also leaves a lot to be desired. According to Transparency International, the three countries are not that far apart, with Bulgaria at 42, Romania 45, and Croatia 47 (the worst score is 0 and the EU average is 66).  Also, the Croatian Journalists’ Association has identified over 900 active criminal defamation lawsuits against journalists and media, which is a lot for a small country. The majority were filed by politicians and public officials to intimidate smaller media outlets and independent journalists, including those who are investigating corruption cases, which puts them at additional risk from organized crime gangs. Journalists who address the crimes committed by Croat forces during the 1991-1995 war of independence may be targeted in harassment campaigns.

True, some attempts to improve situation of the refugees have been made. A year ago, Croatian authorities established a monitoring mechanism to investigate reports of human rights violations along Croatia’s borders, though the body lacks independence and a robust mandate to effectively address the violations. Corrupt individuals, many of them former ministers, are brought to justice and their arrests have been reported with brio. There are also notable improvements in strengthening the fight against gender-based violence. Same-sex couples have gained the right to adopt children. Abortion is legal (though some doctors, encouraged by the very powerful Catholic Church, refuse to perform them). Representatives of green, alternative, and independent political groups and parties are gaining support in Zagreb, Split, and other cities with their platforms of greater commitment to improving inter-ethnic relations. Most Croatian citizens want to be a part of the wider European community and not simply watch everyone else in Europe traveling visa-free in the Schengen space. Yet, Croatia will still have some artificial barriers, the ones to the east, which numerous foreign elements want to cross at great cost, physical or monetary. These eastern borders are 1,400 kilometers long and keep Serbia, Bosnia and Herzegovina, and Montenegro on the other side in the backwaters of Europe.

The EU will likely provide financial help to Croatia to maintaining these borders. Frontex, the European Border and Coast Guard Agency with its annual budget of 754 million Euros, is already engaged in the region. But its practices have raised some doubts, particularly around clandestine detention centers for migrants that violate international law. Cars with the logo of Frontex have been spotted next to these centres. Dutch journalist Derk Walters stresses that “all these structures are informal; they fall outside official and legal frameworks and there is no independent supervision.”

If Croatia can join Schengen, why do Romania and Bulgaria have to wait? By the same token: why should Hungary, a country prone to corruption, blackmailing of the EU, and undisguised aversion to migrants of any kind, continue to be part of the Schengen zone, especially since its actions often don’t follow the EU’s proclaimed rules?

Obviously, something is at play behind the scenes.

In October, the Dutch parliament discussed a motion urging Prime Minister Mark Rutte’s government “not to take any irreversible steps” on the Schengen question for Romania or Bulgaria without “further investigations into border surveillance and the reduction of corruption and organized crime in both countries.” The Dutch parliament ultimately decided to veto the admission of Bulgaria and Romania to the Schengen area, declaring them not to be ready.

But, under EU pressure, that same parliament had a change of heart and at the beginning of December decided to veto only Bulgaria. Did Romania manage to improve its situation in only one month while Bulgaria didn’t? Bulgarians replied immediately, with consternation. Bulgarian Chief Prosecutor Ivan Geshev said:

In connection with the statement of Mark Rutte, that he “wants to rule out the possibility of illegally crossing the border between Turkey and the Schengen area in Bulgaria with a €50 banknote, as the Prosecutor General of the Republic of Bulgaria I state that the prosecutor’s office has no data or evidence for this,” noting that the Dutch should provide data on bribe cases so these can be investigated and brought before the Bulgarian court.

Rutte’s precise words at a press conference after this much criticized remark were: “I’m not saying it’s happening, but I want to have explicitly established that it’s not happening.” Any decent lawyer and/or citizen can only be flabbergasted.

This isn’t the only crack in European unity. Ten months ago, the war in Ukraine brought all member states together as never before, but today disagreements over the joint response to Russia’s aggression are gaining momentum. Conflicts over COVID, climate, and energy have multiplied. The far right has done its best to exploit citizens’ dissatisfaction and unrest for their own purposes, and has not hesitated to indulge in all sorts of conspiracy theories. For example, Dutch right winger Thierry Baudet has claimed that there is an elite in the Western world pursuing a world state: “I believe we are ruled by a worldwide conspiracy of evil reptiles.”

At the same time, organized crime and corruption are far from being the exclusive activities of Balkan states.  On December 7, 25 German citizens were arrested in the biggest-ever police action in Germany targeting right-wing extremists. They are suspected “of plotting to overthrow the government, install a shadow regime led by a 71-year-old aristocrat, and seek talks with Russia to renegotiate its post-second world war settlement.” Reportedly, the group has more than 20,000 followers, which is more than enough to qualify it as a very dangerous criminal organization.

As for corruption, Eva Kaili, vice-president of the European Parliament, was taken into custody on December 7 alongside four others for questioning over alleged corruption and money laundering’  Belgian prosecutors said that they uncovered 600,000 euros in several bags on their premises. Michiel van Hulten, the director of Transparency International EU, commented:

While this may be the most egregious case of alleged corruption the European Parliament has seen in many years, it is not an isolated incident… Over many decades, the Parliament has allowed a culture of impunity to develop, with a combination of lax financial rules and controls and a complete lack of independent (or indeed any) ethics oversight… Every serious attempt to improve accountability is blocked by the Parliament’s ruling bureau, with the acquiescence of a majority of MEPs.

Despite all of this, the EU is still one of the best things that has happened in Europe in a long time. But the organization will have to follow its own proclaimed criteria and rules, to the book. It also must work closely with Human Rights Watch, Amnesty International, Transparency International, and other NGOs. Keeping them at the distance is one of the EU’s biggest mistakes. Most of all, it must put a stop to the double standards that allow for rule-breaking and corruption among some member states and not others.