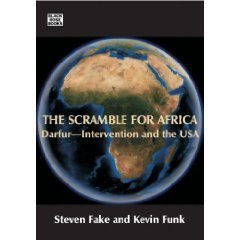 Kevin Funk and Steve Fake offer a scathing and penetrating new look at the crises in Darfur -- one that you won't find in The New York Times or from the Save Darfur Movement.
By Steve Fake, Kevin Funk, Saif Rahman | October 31, 2008

Editor’s Note: This is an excerpt from Kevin Funk and Steve Fake’s new book Scramble for Africa: Darfur-Intervention and the USA.” All footnotes have been taken out of this version — please see the book for all citations.

Just as the Clinton administration mostly continued its hostility towards Khartoum for the rest of its term, the presidency of George W. Bush did not give any initial indications of a dramatic change in policy. Just six weeks after the September 11 attacks, and subsequent to the declaration of the “War on Terror,” the Bush administration developed a list of countries to target in a five-year plan: Iraq, Syria, Lebanon, Iran, Libya, Somalia, and Sudan. Yet it was also largely because of September 11 that relations between Washington and Khartoum began to strike a more conciliatory note.

Following the attacks, Sudan began increasing its sharing of “counterterror” intelligence with the U.S. Though Sudan had been attempting to curry favor with Washington by passing along intelligence for several years prior, it was only upon the commencement of the “Age of Terror” that the US government fully appreciated the benefits of this unsavory alliance. Accordingly, Washington began to warm to Bashir’s regime, with Khartoum moving to stop militants from entering Iraq to fight against US forces, and granting US officials access to detained Al-Qaida suspects. The CIA has collaborated with Khartoum’s Mukhabarat intelligence service to spy on Iraqi rebel movements, and reportedly there are daily liaison visits between the two intelligence agencies.

In turn the State Department has praised Khartoum for taking “significant steps to cooperate in the war on terrorism;” the Sudanese intelligence official Major General Salah Abdallah Gosh, who is accused of planning and participating in attacks against Darfurian civilians, and whom the United Nations has singled out as a figure who should be sanctioned, was brought to visit the White House in April 2005 after being flown to Washington on a CIA jet. Such has been the level of cooperation that Sudanese government officials had reportedly been invited to Bush’s 2004 State of the Union address, though they were later told not to attend due to the increasing attention being paid to the conflict in Darfur. Additionally, Sudan has made significant neoliberal economic reforms, and has accordingly received high praise from the IMF.

Protecting its new ally, the Bush administration rejected the Sudan Peace Act working its way through Congress in 2001, which would have financed support for anti-Khartoum forces, instead signing into law a watered down version the following year. According to John Prendergast of the International Crisis Group, Khartoum’s current intelligence-sharing with Washington as part of the “War on Terror” has greatly dulled whatever appetite the U.S. may have had for confrontation with Sudan. “When the two objectives [of intelligence-sharing versus a supposed desire to end the Darfur conflict] go head to head, counterterror wins every time,” as Prendergast comments, perhaps explaining why Washington lobbied to remove “one of the chief architects” of the Darfur crimes (Gen. Gosh) from inclusion on a list of 17 individuals to face international sanctions drafted by a UN panel. Or why it successfully protected “top Sudanese commanders” from UN Security Council sanctions.

This cooperation aside, Washington has been a very vocal critic of Sudan, standing virtually alone amongst major powers in declaring literal “genocide” in Darfur, regularly denouncing Khartoum for its role in the conflict, and lending verbal support to campaigners calling for “humanitarian intervention” in Sudan. In the unequivocal phrasing of the White House, Sudan “continues to pose an unusual and extraordinary threat to the national security and foreign policy of the U.S.” Yet whatever rhetorical and propaganda value such statements may carry for Washington, the International Crisis Group correctly summarizes the operative factors behind U.S. and international policies vis-à-vis the conflict: “The sad reality is that Darfur simply does not matter enough, and Sudan matters too much, for the international community to do more to stop the atrocities” — though one may be inclined to wonder if humanitarian considerations matter even one iota, at least if nations are to be judged by their deeds rather than their noble rhetoric.

This contradiction between the words and actions emanating from Washington represents both deliberate deception on the part of the Bush administration, as well as the realities of attempting to appeal to disparate political groups.

The question of U.S.-Sudanese relations is a contentious one in U.S. politics, provoking a fissure even within Bush’s core groups of support. On one side are fundamentalist Christians, neoconservatives with ambitious geopolitical dreams, and some human rights crusaders, all rearing for action against Sudan. On the other are groups fixated primarily on the strategic value to the U.S. of the current regime in Khartoum — not only for intelligence-sharing in the “War on Terror,” but also due to a reluctance to upset the Washington-backed North/South peace agreement, the desire to gain an ally in a location of great strategic importance with substantial oil reserves, as well as a commitment to impede Chinese influence in Africa. The “human rights” faction, strongly hostile to Khartoum, consists of student activists and elements in Congress as well as lobbying groups, especially from the Jewish and fundamentalist Christian communities, this latter group a key source of electoral support for Bush. The other faction — a “realist” camp — includes the State Department, Defense Intelligence Agency (DIA), and the CIA, united behind the creed that Khartoum is “too important to he harshly treated,” and that as a result the Sudanese government “should at least be helped even if perhaps not fully supported.”

Election season aside, the “realist” camp of course “wins every time.” According to Africa scholar Gérard Prunier, “the interest level of U.S. diplomacy on the Sudan question dropped sharply as soon as President Bush was re-elected.” To be more precise, White House public grandstanding “dropped sharply” while policy has remained mostly constant throughout.

Accordingly, the Bush administration, curiously praised for its “good work” in some activist circles for its handling of the conflict in Darfur, pressured Congress to weaken the Darfur Peace and Accountability Act — which called for greater support for African Union (AU) forces in Darfur, an increase in their size, a broadening of their mandate, and International Criminal Court prosecution of war criminals — and instead signed into law a “toothless” form of the bill in 2006. The Bush administration even made an exception to the sanctions to allow Khartoum to hire a $530,000 Washington-based lobbyist, and the United States is reportedly planning to build its largest African embassy in the Sudanese capital.

In late 2006, Washington threatened to enact a “Plan B” for Sudan if Khartoum failed to halt the crisis in Darfur. Though its contents were initially kept secret, even past its come-and-gone January 1, 2007 deadline for implementation, the White House’s designs have since become public. “Plan B” called for Washington to block U.S. financial transactions connected to the Sudanese government — nothing more than a “short-term convenience” for Khartoum, according to Sudan scholar Eric Reeves — as well as sanctions, since implemented, against three individuals “involved in fomenting violence in Darfur.” As Prendergast comments of the targeted persons, “not one of them [is] the real ringleader of the policy to divide and destroy Darfur.” In light of Washington’s attempts to protect its collaborators from UN sanctions, figures who actually have considerable responsibility for the crimes in Darfur, it could hardly be more plain that the Bush administration cares not a fig for Darfurian lives.

Small punitive steps aside, the Bush administration has undertaken a radical shift in its relations with Khartoum since 2001, informing European allies that it “no longer seeks the overthrow of the Bashir government.” The State Department’s congressional 2008 budget justification, released in February 2007, is also indicative of this shift. For the first time in at least the last several years, there is a request for “Foreign Military Financing” to Sudan. Additionally, the funding request for International Military Education and Training (IMET) is significantly increased from the prior year’s request, which itself represented the first time since 1989 that funding for this program was requested for Sudan.

Altogether, while the United States continues to retain some punishing measures against the Sudanese government as a whole (e.g., sanctions against Khartoum, and maintaining Sudan’s position on the list of state sponsors of terrorism), these requests speak to an increasingly prominent policy of cultivating allies in the Sudanese military and intelligence community. As stated baldly in the 2007 budget justification, “The United States will maintain its strong support for countries on the front lines in the War on Terrorism, especially Afghanistan, Pakistan, and Sudan.” Due to this fruitful intelligence-sharing relationship and Washington’s desire to gain a foothold in Sudan’s booming oil industry, the U.S. publicly announced in spring 2008 its offer to normalize relations with Khartoum, provided that the north-south Comprehensive Peace Agreement (CPA) is implemented and a resolution is found to the Darfur conflict.

In contrast, prominent Democrats, including those that sought the party nomination for the presidential elections in 2008, have staked out aggressive and hawkish positions on Darfur, though they made only sparse references to the conflict in the latter stages of the campaign. Senator and Democratic presidential nominee Barack Obama stated back in 2005 that “the U.S. must ensure humanitarian intervention with or without the Sudanese government’s permission,” that is, an open call for an invading force. Similarly, Senator Hillary Clinton (D-NY) had previously pledged to “work with NATO to take military action” in Sudan if Khartoum refused to allow a AU-UN deployment into the country (which at the time of publication has been only partially deployed), in addition to proposing a no-fly zone over Darfur and a blockade of the Port of Sudan — a measure defined as “aggression” by the UN General Assembly. Fellow Senator, former presidential candidate, and vice presidential nominee Joe Biden (D-DE), chair of the powerful Senate Foreign Relations Committee, has stated repeatedly that he would impose a no-fly zone and commit U.S. troops to Darfur — a prospect that, if serious, merits significant concern.

With the Bush administration in bed with key elements of the Bashir regime, and leading Democrats tripping over each other to propose the most bellicose “solutions” to the conflict — that is, when they can be bothered to mention the conflict at all — the suffering people of Darfur are seeing few signs of hope from Washington. Instead, the general U.S. resistance to international law has impeded potentially valuable efforts to halt the crisis in Darfur.

Steve Fake, Kevin Funk, Saif RahmanSteve Fake and Kevin Funk are contributors to Foreign Policy In Focus. They are social justice activists and authors of the book Scramble for Africa: Darfur-Intervention and the USA. They maintain a blog with their commentary called "Confronting Empire".