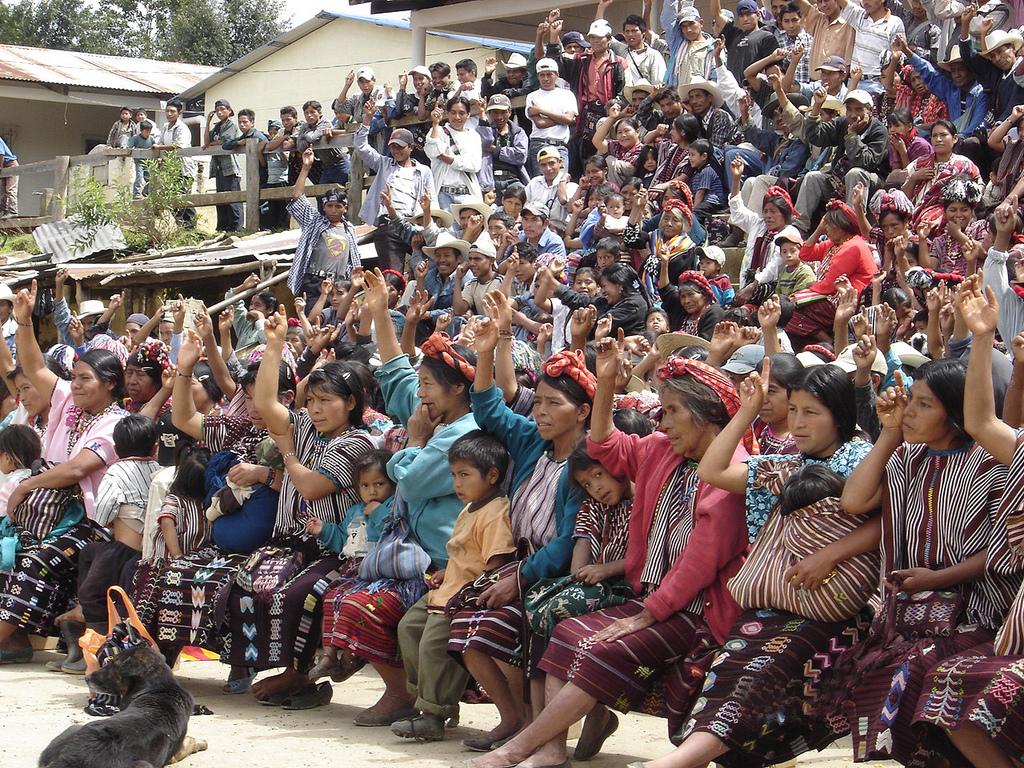 Latin Americans and Africans have tried before to sue Canadian mining companies for alleged wrongs committed overseas, but their cases were thrown out. But now a case from Guatemala is moving forward. (Photo: Friends of the Earth International / Flickr)

Seeking Justice in Canada: Hitting Mining Companies Where They Live

Canadian mining companies have long evaded responsibility for abuses carried out by their subsidiaries in the developing world. That could be about to change.
By Sebastian Rosemont | August 12, 2014

Violence by Guatemalan mine operators is not rare. For a Guatemalan to seek justice in Canada, where a host of North American mining conglomerates are based, is.

Adolfo Ich was an important community leader in El Estor, a Mayan Q’eqchi’ town near the Fenix nickel mine in Guatemala’s eastern province of Izabal. On September 27, 2009 clashes broke out between protesters against the mine and security forces hired by the mine operators.

Ich, who had been in his home, went out to investigate what was happening and try to help end the violence. He approached the security forces who, it is claimed, recognized him as an anti-mine leader and activist. They proceeded to beat and hack at him with a machete.

Then, according to a lawsuit filed in Canada, the head of the security forces, a former military officer, shot Ich in the head.

A suit by Ich’s widow and fellow community member German Chub, who was paralyzed by a gunshot in the same protest where Ich died, has begun its path through the Canadian system. The two plaintiffs have been joined by 11 Guatemalan women from the community of Lote Ocho, who say they were gang raped during a forced eviction by mine security forces on January 17, 2007.

According to a 2011 ruling by the Constitutional Court of Guatemala that the Mayan Q’eqchi’ communities had legal rights to the lands they traditionally held, the 2007 evictions were illegal. But the harsh reality is that Guatemalans have little to show for their efforts to secure their rights through their country’s court system.

Facing dim prospects in Guatemala, these three cases have been brought as a joint suit against Hudbay Minerals Inc., a global mining company based in Toronto. Foreign nationals have tried before to sue Canadian companies for alleged wrongs committed overseas, but their cases were thrown out. This is the first one to win a judge’s approval to move to the trial stage.

There are several legal obstacles for bringing a case to Canada.

The company defendants typically argue that Canadian courts lack jurisdiction over what the companies do abroad. Or they might say that the case ought to be heard in the country where the alleged offence took place (the legal term is forum non conveniens, meaning there’s a more suitable setting). Or they might claim that whatever happened was unpredictable and that they fulfilled all reasonable expectations of a duty of care, which is a legal obligation to observe a reasonable standard of care while engaging in any activities that might harm another person.

In 2010, a case against Anvil Mining Ltd. for abuses committed in the Democratic Republic of the Congo was struck down on the basis of lack of jurisdiction. Anvil Mining was headquartered in Australia but had opened an office in Montreal.

In 1998 a Quebec judge struck down a class action suit brought by a Guyanese community against the Canadian mining company Cambior Inc. with the rationale that the conditions of the case made it more suitable to be heard in Guyana. A duty of care case was filed in 2008 by Ecuadorean plaintiffs against two directors of the Canadian company Copper Mesa, but the Ontarian judges found there was insufficient evidence to hold the directors personally responsible for the actions committed in Ecuador.

But in the Hudbay case, the mining company has not argued jurisdiction and withdrew a motion based on forum non conveniens. Hudbay lawyers said that they “are happy to rely on the Ontario courts to ensure that justice is served.” Nevertheless, Hudbay did move to have the cases struck on the grounds that they did not owe a duty of care to the plaintiffs. Judge Carole Brown dismissed the motion saying, “I find that it is not plain and obvious that the three Statements of Claim disclose no reasonable cause of action in negligence.”

Cory Wanless is a lawyer for the Guatemalans. Wanless says that allowing this case against Hudbay to proceed to trial forces Canadian companies to take note.

“As a direct result of this precedent, we fully expect more lawsuits of this kind to be filed against other mining and oil and gas companies,” says Wanless.

Wanless might have a point. This summer in British Columbia, seven Guatemalans filed a suit against the Canadian firm Tahoe Resources. They claim the company was responsible for a shooting during a community protest at Tahoe’s mining operation.

Wanless said several corporate law firms have issued advisories to their clients. Norton Rose Fulbright, one such firm, wrote, “international public expectations are changing, and directors and officers of Canadian companies need to be aware of the potential risk of claims by foreign plaintiffs seeking redress for alleged harm committed beyond Canada’s borders.”

Definitions of mine ownership vary, but most research finds that Canadian companies are involved in 50 to 70 percent of mining operations in Latin America. This comes to about 1,500 mining projects in the region. Day-to-day management of the mining projects is generally in the hands of subsidiaries of the parent Canadian mining corporations.

In the case of the Fenix mine, Hudbay’s subsidiary was Compañía Guatemalteca de Níquel (CGN). CGN was in charge of hiring the private security forces. This can make accountability a difficult thing to determine. (Company ownership also can shift. CGN was owned by Skye Resources up until 2008. In 2008 Skye was acquired by Hudbay and renamed HMI Nickel. The lawsuits are directed at Hudbay/Skye.)

The Guatemalan plaintiffs argue that the potential for violence was a foreseeable consequence when Hudbay/CGN authorized the deployment of the security forces to evict the community of Lote Ocho in 2007 and to confront the protesters in 2009.

Law professor Shin Imai at the Osgoode Hall Law School worked on a legal analysis of the HudBay case. Imai and his co-authors said that there is good legal grounding for the plaintiffs. In Imai’s view, responsibility for the actions that occur at mining operations should rest with the primary beneficiaries of the profits that the mines produce.

Hudbay used an interesting approach in its effort to derail the suit. Company lawyers said that if Canadian lawmakers wanted to hold Canadian firms more accountable, they could have passed a law. They noted that the parliament has rejected two bills that would have done that. One of those bills, Bill C-300, was narrowly defeated by six votes in 2010.

That argument didn’t pass muster with the judge. But Imai and his colleagues said that if Canadian law is ambiguous on this point, with the HudBay case, “Canadian courts have the chance to fill the void.”

It could be years before the case actually goes to trial while both parties gather evidence. In the meantime, the Guatemalans of El Estor are still dealing with the Fenix mining project. Hudbay sold the project and CGN to the Solway Group, based in Cyprus, on the condition that Hudbay assume legal responsibility for the actions that occurred prior to the sale. Operations at the Fenix mine have resumed, accompanied by renewed violence between protestors and security forces and invasions of the community of Lote Ocho by security forces.

Even as the mining operations continue in El Estor, the trial of Choc et al. vs. Hudbay offers the potential to change the rules of the game. People in countries with weak judicial systems now have at least the possibility to seek justice in the well-established court system of Canada. If the verdict goes in favor of the plaintiffs, a new transnational understanding of rule of law will emerge as well.

Sebastian Rosemont is a contributor to Foreign Policy In Focus. He recently graduated from McGill University with a degree in Latin American studies.