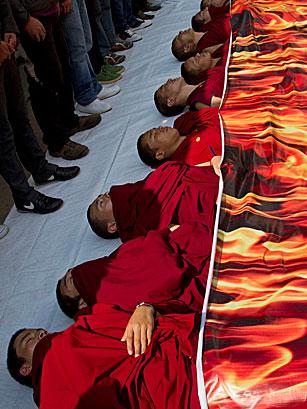 The current wave of self-immolations may make the issue of Tibet impossible for either China or the United States to ignore.
By Saransh Sehgal | March 21, 2012 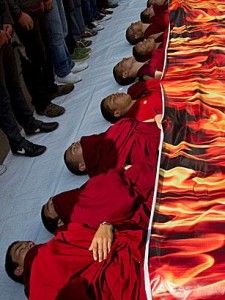 Western China’s Sichuan province, where most ethnic Tibetans reside, has recently become the epicenter of more than two dozen self-immolations by Buddhist monks, nuns, and lay Tibetans. These protests against the policies of the Communist regime in the region not only have stunned exiled Tibetans but has also shocked the world community.

The latest self-immolation came on March 17 when a 44-year-old Tibetan farmer set himself on fire in northwestern Qinghai province. There have now been 30 self-immolations since February 27.

According to Tibetan exiles and their overseas supporters, the self-immolators before they died shouted anti-China slogans, appealed for religious freedom, called for an independent Tibet, and demanded the return of Tibet’s spiritual leader the Dalai Lama.

In Dharamsala, the de facto capital of exiled Tibetans, protests take place almost every day in solidarity with the actions inside Tibet. “We are deeply troubled by reports of such cruel treatment of fellow human beings,” stated Dicki Chhoyang, a representative of the Tibetan government-in-exile. “We appeal to the governments and the international community to make urgent representations to the Chinese government to end the tragic cycle of self-immolation in Tibet by adopting liberal polices in Tibet and demonstrate greater wisdom in its handling of the current tense situation.”

These self-immolations pose a slight but possibly de-stabilizing challenge to China’s regional policies. Beijing recently branded those who set themselves alight as terrorists and blamed overseas Tibetan groups. Wu Zegang, the government’s administrator in Aba, alleged that the Dalai Lama, the Tibetan spiritual leader, “orchestrated and supported” the self-immolations. “Some of the suicides are committed by clerics returning to lay life, and they all have criminal records or suspicious activities. They have a very bad reputation in society,” said Wu, himself an ethnic Tibetan.

In an effort to pour oil on troubled waters, the Chinese government is trying its best to give the outside world an impression of normalcy in a region barred to tourists and foreign media. “I can tell you with full responsibility that currently the region is stable and safe,” said Padma Choling, a National People’s Congress deputy and chairman of the region. “If not, how it could be possible for me to take a week-long vacation during the Tibetan New Year holiday last month and come to the annual National People’s Congress session in Beijing to perform my duty as a deputy with no worries?”

The international community, which has sent signals to Beijing to calm the situation, hasn’t been able to pressure the Communist regime. When President Barack Obama met with Chinese Vice President Xi Jinping, Hu Jinato’s likely successor, they didn’t talk about Tibet. But U.S. Special Coordinator for Tibetan Issues Maria Otero said recently that “the U.S. Government consistently and directly has raised the issue of Tibetan self-immolations with the Chinese government. The U.S. Government repeatedly has urged the Chinese government to address the counterproductive policies in Tibetan areas that have created tensions and that threaten the distinct religious, cultural and linguistic identity of the Tibetan people…We call on the Chinese government to resume substantive, results-oriented dialogue with the Dalai Lama or his representatives to address the underlying grievances of China’s Tibetan population.”

Washington has taken the right position in support of religious freedom and culture in Tibet. But it hasn’t done enough to pressure Beijing to change its policy. The current wave of self-immolations, however, may make the issue of Tibet impossible for either country to ignore.

Saransh SehgalSaransh Sehgal, a contributor to Foreign Policy In Focus, also writes for Asia Times Online. He can be reached at: saranshsehgal (at) gmail (dot) com.