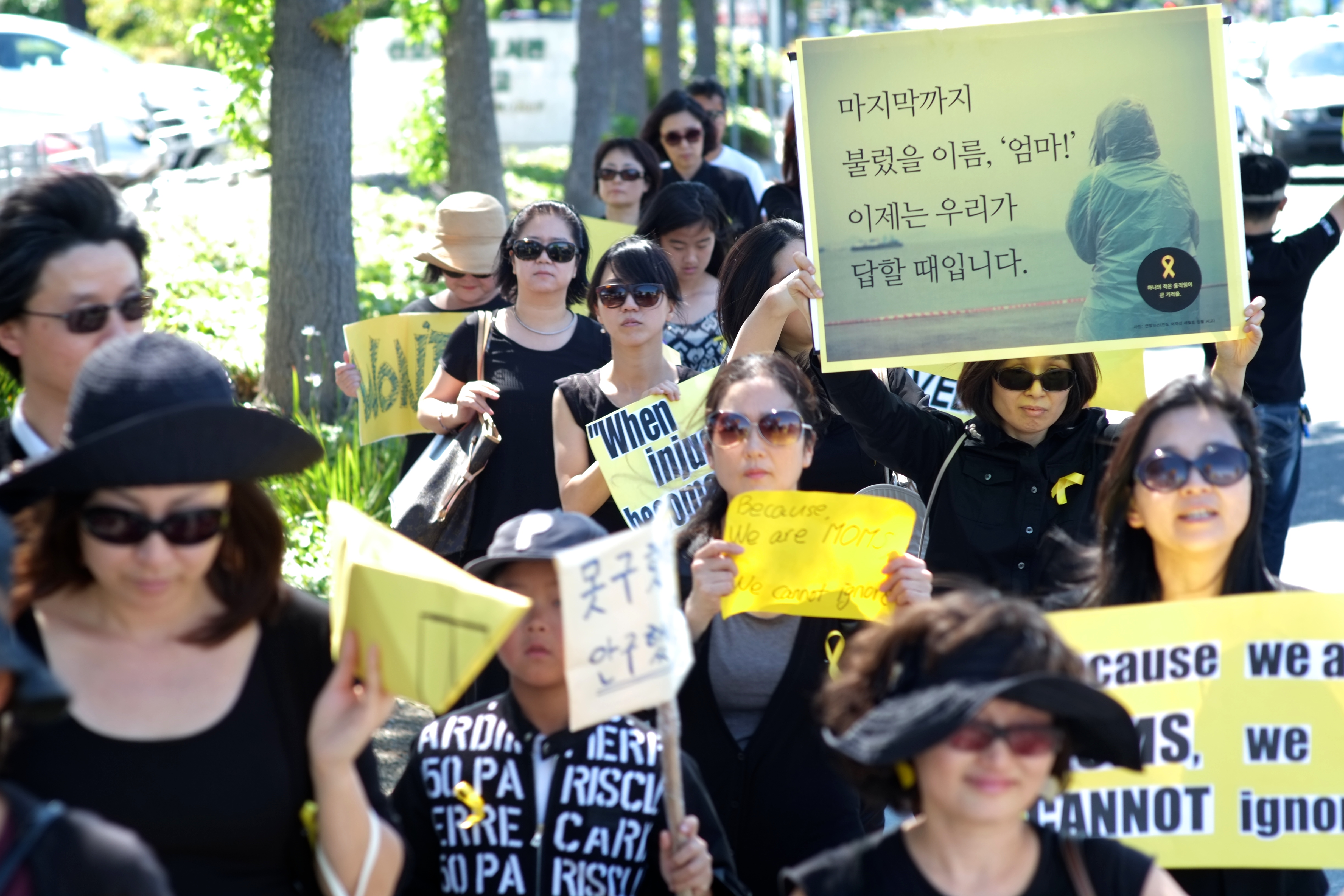 In light of the Sewol ferry tragedy, Korean American activists are highlighting the dangers of rampant deregulation and prioritizing corporate profits over human security.

The Sewol on Our Shores

For some Korean American activists, the Sewol ferry disaster is a reminder that South Korean capitalism is a product of the country's authoritarian past—a past in which the U.S. played no small part.
By Christine Hong | May 21, 2014

On Sunday, May 18, on the corner of El Camino Real and Flora Vista Avenue in Santa Clara, California, 300 Korean Americans clad in black, the color of mourning, carried yellow signs and donned yellow hats with slogans proclaiming, “Moms Want the Truth,” “Democracy in South Korea,” “Government Incompetence,” “Zero Rescued,” and “Not an Accident!”

This rally, which called critical attention to the Sewol ferry disaster, in which over 300 people died—the majority of them students from Danwon High School—occasioned some nativist response. A few drivers leaned out their car windows, shaking their fists as they shouted anti-Asian slurs and yelled for us to “Go home!” One flipped us off before peeling around the corner. Commenting on a San Jose Mercury News article about the rally, one reader sounded a familiar refrain: “if you want to be that involved in a foreign government, move there.” The message from such quarters was clear: the Sewol ferry disaster was a foreign issue that matters only to a foreign people.

To no small degree, perhaps especially in our globalized age, connecting “there” to “here” presents an abiding challenge to transnational organizing and solidarity. Why should anyone be concerned with what happens over there? Why should it matter to us?

For many in Santa Clara, a heavily ethnic Korean enclave of the South Bay, the messages on our signs and hats required no further explanation. For every wave of traffic that passed before us, several cars honked in support. For these drivers, as with those of us standing along this busy intersection, the Sewol ferry disaster was no far-flung concern. Indeed, the rally was one of roughly 30 protests organized by Korean Americans in cities across the United States in solidarity with massive ongoing candlelight vigils in South Korea calling for an independent investigation into the disaster and for President Park Geun-hye to resign.

Yet the meaning of these rallies went deeper. Even in Santa Clara, a bustling hub of Asian immigrant entrepreneurship, the rally offered a trenchant critique of neoliberal capitalism—of the dangers of rampant deregulation, corporate profits prioritized over human security, irregular and poorly trained labor, and privatized rescue operations, as well as government manipulation of media. Indeed, the Korean Confederation of Trade Unions (KCTU) described the ferry disaster not as a tragedy or an accident but, in blunter terms, a “massacre committed by political power and capital”—a foreseeable disaster in which “capitalist greed” resulted in the abandonment of “safety and a sense of responsibility for the sake of increased profit.” In South Korea, a country frequently touted as an example of East Asian capitalist democracy done right, public mourning over the deaths of the ferry victims has morphed into a groundswell of outrage against the neoliberal policies and corporate cronyism of the Park Geun-hye government.

This dark account of capitalism forms the underside of rosy narratives about South Korea’s rise on the world stage. Indeed, much of South Korea’s compressed development occurred during four decades of U.S.-backed dictatorships—a “miracle on the Han” whose human graveyard lurks as sobering subtext to the typically bright accounts of capitalist democracy thriving south of the 38th parallel that we are far more accustomed to hearing. Proclaiming that the Korean War “was no tie” before an audience of American veterans last year, President Barack Obama, for example, described South Korean capitalism as a triumph of the Korean War: “When 50 million South Koreans live in freedom—a vibrant democracy, one of the world’s most dynamic economies, in stark contrast to the repression and poverty of the North—that’s a victory; that’s your legacy.”

The question, however, that the Sewol ferry disaster poses is whether the relationship between capitalism and democracy can be easily assumed or whether capitalism, in the South Korean case, betrays its relationship with the dark authoritarianism of the past—a history in which the United States played no small part. Beyond the symbolism of black (mourning) and yellow (a color associated with popular support for the liberal Roh Moo-hyun, who was succeeded by conservatives Lee Myung-bak and Park Geun-hye), the demonstrations were coded by a dark history of U.S. and South Korean military collusion.

Thirty-four years ago, on May 18, 1980, students, labor organizers, and ordinary citizens in the South Korean city of Gwangju rose up in democratic protest against a dictatorial military regime backed by the U.S. government. This watershed event, in which the United States authorized the use of force against South Koreans who rose up for democracy, has animated people’s struggles in South Korea and in the Korean diaspora ever since. Democracy in South Korea emerged despite U.S. intervention, not because of it, and it is precisely this commitment to democracy that we saw in action on the corner of El Camino Real and Flora Vista Avenue.

Christine Hong
Christine Hong is an assistant professor of transnational Asian American, Korean diaspora, and critical Pacific Rim studies at UC-Santa Cruz. She is a steering committee member of the Alliance of Scholars Concerned about Korea, a coordinating council member of the National Campaign to End the Korean War, and a member of the executive board of the Korea Policy Institute.