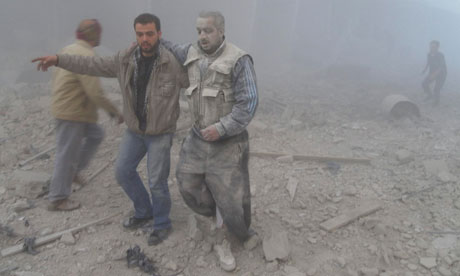 The London Review of Books has again published venerable journalist Seymour Hersh’s latest piece, The Red Line and the Rat Line. Before exploring the controversy swirling around it, let’s briefly address a question that may have occurred to you. Why doesn’t the New Yorker  publish Hersh anymore? After his first LRB piece in December of 2013 about the use of chemical gas in Syria titled Whose sarin?, Michael Calderone of the Huffington Post wrote:

Hersh is a freelancer, but he’s best known these days for his work in The New Yorker, where he helped break the Abu Ghraib scandal in 2004. While Hersh is not a New Yorker staff writer, it was notable that his 5,500-word investigative piece landed in the London Review of Books, a London literary and intellectual magazine, rather than the publication with which he’s most closely associated.

In an email, Hersh wrote that “there was little interest” for the story at The New Yorker.

A New Yorker spokesperson did not immediately respond to a request for comment.

Hersh then took the story to The Washington Post. The Post intended to publish it, as BuzzFeed first reported.

… It’s unclear exactly why the Post decided not to publish the story. Hersh wrote that he was told by email that Executive Editor Marty Baron decided “that the sourcing in the article did not meet the Post’s standards.”

… reiterated his contention that the administration “may have not played it straight about a war crime [and] actually asked America to go to war without a solid case.” Such consequential issues, he wrote, make his own “travails” to get the piece published “seem slight.”

Indeed, Hersh didn’t seem particularly bothered by having to shop the story to different outlets, telling HuffPost over email that “these things happen on tough stories presented by a non-staff writer … the way it goes … freelancing is not for the faint of heart.”

His equanimity notwithstanding Hersh has been accused, in so many words, of being a conspiracy theorist. In his first piece, he wrote, “the administration disregarded the available intelligence about al-Nusra’s potential access to sarin and continued to claim that the Assad government was in sole possession of chemical weapons.” Elaborating on that in his second piece, he begins by describing how the U.S. military command stayed the hand of those in the administration ― almost everybody ― who favored not just launching an attack on Syria, but a massive attack.

Obama’s change of mind had its origins at Porton Down, the defence laboratory in Wiltshire. British intelligence had obtained a sample of the sarin used in the 21 August attack and analysis demonstrated that the gas used didn’t match the batches known to exist in the Syrian army’s chemical weapons arsenal. The message that the case against Syria wouldn’t hold up was quickly relayed to the US joint chiefs of staff. The British report heightened doubts inside the Pentagon; the joint chiefs were already preparing to warn Obama that his plans for a far-reaching bomb and missile attack on Syria’s infrastructure could lead to a wider war in the Middle East. As a consequence the American officers delivered a last-minute caution to the president, which, in their view, eventually led to his cancelling the attack.

Even more explosive was Hersh’s reporting on Turkey.

Prime Minister Recep Erdoğan was known to be supporting the al-Nusra Front, a jihadist faction among the rebel opposition, as well as other Islamist rebel groups. ‘We knew there were some in the Turkish government,’ a former senior US intelligence official, who has access to current intelligence, told me, ‘who believed they could get Assad’s nuts in a vice by dabbling with a sarin attack inside Syria – and forcing Obama to make good on his red line threat.’

… In spring 2013 US intelligence learned that the Turkish government – through elements of the MIT, its national intelligence agency, and the Gendarmerie, a militarised law-enforcement organisation – was working directly with al-Nusra and its allies to develop a chemical warfare capability.

Turkey’s willingness to manipulate events in Syria to its own purposes seemed to be demonstrated late last month, a few days before a round of local elections, when a recording, allegedly of a government national security meeting, was posted to YouTube. It included discussion of a false-flag operation that would justify an incursion by the Turkish military in Syria.

Many contested Hersh’s findings. In a post at Arms Control Wonk, Stein made some valid points.

[One expert] forcefully argues that the volcano rockets used in the 21 August attack is a clear indication of regime culpability. In September 2013, Dr. Igor Sutyagin, a research fellow at RUSI in London, used open source analysis to confirm that the rockets in question are still in service with the Russian Navy and have likely been exported to Syria. Uzi Rubin, the first Director of Israel Missile Defense Organization, argues, “The ‘330 mm’ rockets discovered in Zamalka and Ein Tarma were not improvised, jury rigged devices that could be casually made in any workshop; rather, they were part of a well designed range of weapon systems contrived to fulfill Syrian Army’s operational needs.” And finally, Dan Kaszeta, a former US Army officer and consultant based in London, has estimated that the perpetrator of the attack would have needed an industrial facility to produce the amount of Sarin used.

But when Stein strays from the technical, his argument becomes shaky.

Thus, in order to believe Hersh’s recounting of events … Prime Minister Erdogan would have had to authorize the attack, and thereby sign off on the killing of hundreds of Syrians.

Erdogan is a rough and tumble dude, but the assertion that the Turkish Prime Minister would agree to such an attack belies any real understanding of Turkey’s Syrian policy. … While Turkey has geopolitical reasons to support certain rebel groups … the Turkish leadership’s desire to prevent more bloodshed is an aspect of Ankara’s Syria policy that most analysts often overlook. Erdogan, for example, often cries when speaking about the subject of Syria during television broadcasts and Foreign Minister Ahmet Davutoglu’s voice noticeably changes when he speaks about the issue in public.

Hard for me to be that sanguine about Erdoğan when he’s not only backing Al Nusra, but after the way he treats his own people. You have only to look at the heavy hand with which he repressed the demonstrations that began over Istanbul’s Taksim Gezi Park in May 2013. Approximately 11 were left dead, 8,000 injured.

But, far be it from me to criticize Erdoğan’s human record. After all, in December 2010, he received “the Al-Gaddafi International Prize for Human Rights for his ‘distinguished service to humanity,’ which he said will further encourage him to fight for human rights.”

What’s odd is that Hersh’s critics seem to assume he has an agenda? What would be his motivation? To come up with scoops to prolong an aged an aged journalist’s career, no matter how decorated? To help stop Turkey from continuing to al Nusra?

While the latter may be true, it certainly does a journalist with Hersh’s reputation a disservice to imply that that he is trying to mold the facts around an agenda. It’s funny how the phrase “false flag” automatically raises a red flag. Like enraged bulls, those who have assigned themselves the task of stamping out all conspiracy theories, charge after it.