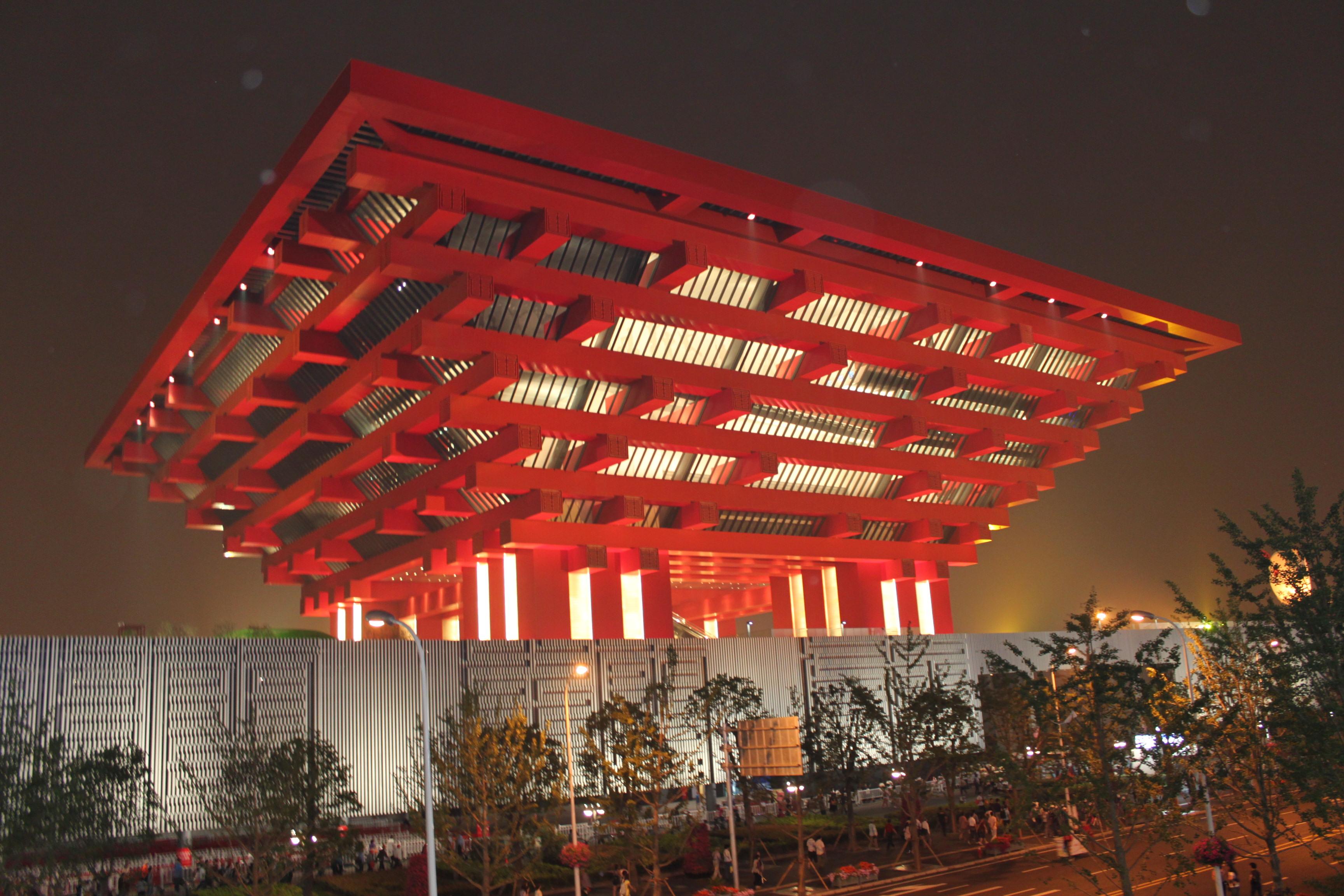 The World Expo in Shanghai showcases the airbrushed future and polarized present in China.
By Josh Leon | July 16, 2010 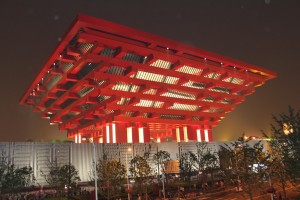 On a busy day, Shanghai’s World Expo can usher in crowds on par with the population of Boston. A ticket gets you dazzling oddball architecture, glittering ceremonies, and long, sweat-drenched lines. This is the latest episode in Shanghai’s aspiration to join the top tier of global cities that assert their worldwide political, cultural and economic influence. It is but one phase in China’s tectonic physical transformation, fueled by near-perennial double-digit growth and ethereal land valuations.

Entry into the WTO in 2001 amplified China’s multifaceted impact on the outside world and vice versa. The following year, an outward-looking Shanghai successfully bid for the Expo. The mega-event has since been dubbed the “economic Olympics.” Perhaps only in today’s China would the stars of state power and global capitalism align for such a massive undertaking. Moreover, the Chinese market has proven a powerful spur for the Expo’s 200-plus participants eager to wager taxpayer dollars on the unorthodox diplomacy of pavilion entertainment.

World Expos are dated quinquennials with roots in the old “World’s Fairs” that famously electrified audiences in Philadelphia, Paris, London, Chicago, New York and San Francisco throughout the mid-19th and early 20th centuries. The event’s prestige, at least in a way of demonstrating the power of the host country, fell sharply thereafter. Its presence in Shanghai marks a comeback. This year’s Expo evokes the historic fairs that showcased the rising prowess of France, Britain, and the United States during the belle époque of laissez-faire economics and presumably infallible industrial progress. It is a Disney-like caricature of a world brought closer together through the wonders of technology. More implicitly, it provides an optimistic rendering of the political status quo.

The Expo is itself a sanitized microcosm of the modern global city. Within its confines flourish cultural variety, urban glamour, and delightfully frivolous exhibits to suit virtually any consumer taste. Sample your choice of exotic Euro-cuisine, then take in a Herbie Hancock show. The grounds are replete with massive green spaces that straddle the Huangpu River. There are grand elevated walkways that would impress in any major world capital. These are the only way to gain a comprehensive visual perspective on the sprawling grounds. The Chinese pavilion — a hulking pagoda-style inverted pyramid —dominates the pedestrian structure’s central axis.

The pavilions offer varying hypotheses on the question of better urban living. The “Pavilion of the Future,” for instance, guides visitors through a cinematic tunnel showing images of sci-fi urbanism, most notably the striking skyscraper canyons of Fritz Lang’s Metropolis. From there you enter a multimedia exhibit celebrating ideals of open space and decongestion. It highlights theoretical utopias conceived by the likes of Thomas More, Charles Fourier, Ebenezer Howard, and above all Le Corbusier. Their radical conceptualizations of community living space, we learn, underpin contemporary efforts to confront overpopulation in cities. The crescendo is a borderline hallucinogenic animated film, showing children frolicking through various prototypical cities that are in seamless environmental harmony. A child in the “intelligence city” ponders the value of a fictitious microchip that enables autodidactic learning. The knowledge economy, the message goes, is a natural evolutionary progression away from the physical economy of factories and warehouses (to symbolize this, the pavilion itself was converted from an old power station).

Unsurprisingly, the Expo offers few overt reminders of the competition and polarization that frustrate life in modern Shanghai — lucidly documented by Xiangming Chen’s edited volume Shanghai Rising. Forward-looking Expo posters around Shanghai beckon passersby to “touch the future.” The Expo’s urban best-practice areas correspondingly envision a more comfortable, globally connected urban lifestyle that is the promise of the new Shanghai. “A futuristic city,” writes historian Jeffrey N. Wasserstrom in his fascinating book Global Shanghai, “is one that regularly inspires dreams and nightmares, not just within but also well beyond its borders, and one that is thought of as rich in disturbing portents and also promise.” The city’s own experiments in advanced transit and high-rise construction were intended to attract investment capital but also serve to capture imaginations. The ultra-wired commercial spaces in downtown Shanghai are veritable temples to globalization.

The World On Display

The Expo captures this zeitgeist, but mostly for local consumption. Only a fraction of the Expo audience (which has bought 33 million tickets so far) comes from abroad. Shanghai hopes the Expo capitalizes on a booming domestic tourism market fueled by new infrastructure connecting population centers and an increasingly mobile middle class. The Expo stands to draw millions of people into the city, many for the first time. They will traverse Shanghai’s immense architecture, dense neighborhoods and impressive wealth of amenities with much the same awe people feel when walking Manhattan. The Expo reinforces Shanghai’s place as China’s premier business capital and talent magnet.

For Shanghainese, the Expo symbolizes Shanghai’s reemergence as a great city. Some residents boast that their city could have done a better job hosting the Olympics than rival Beijing. More seriously, Shanghai faces stiff competition with Beijing in attracting commerce. The latter offers firms proximity to China’s strong central government. Expo preparations have meant additional influxes of government money and helped equalize treatment between the two cities. For decades Shanghai had sent money to the central government and gotten little back. Deng Xiaoping’s early experiments with capitalism initially passed up Shanghai in favor of Shenzhen. The Expo signifies Shanghai’s place as China’s premier city following these setbacks.

Xiangming Chen told me in an interview that “Shanghai is positioning itself” to someday rival Hong Kong, Tokyo, and Singapore as financial capitals. “Whether it actually happens,” he adds, “only time will tell.” The city’s breakneck construction partly reflects current demand for global investment in Shanghai. It also reflects the government’s best guess of what demand will be a decade or more into the future. A new building, airport, or transit line can be a hit or miss. As Shanghai scholar Weiping Wu put it to me, officials plan with the belief that “if you build it they will come, but sometimes they don’t come.” The Expo only gets one summer to succeed.

The government’s massive expenditure on the Shanghai Expo comes on the heels of its purse-breaking Olympics. These undertakings illustrate the lengths the Chinese growth machine is willing to go to maintain its current rate of development. These events provide a Keynesian boost to local economies. They also provide the symbolic imagery of economic power. Both advantages promote the notion that the system is working. This is an invaluable message for a government that promotes its legitimacy through its development accomplishments. For Expo participants, partaking is good diplomacy. These pavilions project the unblemished images of countries to an eager Chinese audience — and China’s unblemished face to the outside world.

Dystopia in the Background

The Disneyesque purity of the Expo narrative is in some ways a departure from important realities. Its official theme of “better city, better life” does not at all capture the dystopian elements of urban China’s impressive development. Shanghai is constantly tearing down and displacing to build anew. Even the Expo required neighborhood demolitions. This is all reminiscent of U.S. cities during the urban renewal era. At its worst, people and places were mere moveable objects obstructing contemporary notions of progress. Walkability and human scale were afterthoughts, much like what we see in Shanghai’s iconic Lujiazui financial district today. (Urban planning expert Thomas J. Campanella aptly likened Lujiazui to a jacked-up version of Dallas). Moreover, the city’s growing class differentiation is paralleled by variation in the quality of Shanghai’s epic construction effort. Newer high-rises already show signs of age. Last year, one collapsed altogether.

Beyond Expo glamour, Shanghai remains a comparatively poor, polarized city. There are pockets of protest sparked by the somewhat new problem of overdevelopment. Not everyone, it turns out, wants a magnetically levitated train whizzing by their apartment window. Some lament the loss of predictability that existed before today’s market vicissitudes. Those who have yet to benefit now reasonably expect their boats to rise. This includes workers laid off from Shanghai’s erstwhile light manufacturing industries and shrinking state-run factories. Most of all it includes the city’s migrant underclass.

The seamier sides of Shanghai complicate but do not undermine the Expo’s forward-looking narrative: This city is overcoming decades of scarcity. Today’s Shanghai really does offer the more comfortable, connected life — with more consumer choices — that is the promise of both market globalization and Chinese state-led growth. Good feeling about Shanghai’s improved situation prevails. The Expo draws from this wellspring.

Josh LeonJosh Leon is covering the World Expo for Next American City Magazine. He writes the “World Watch” column for americancity.org, teaches international relations at Villanova University, and is a contributor to Foreign Policy In Focus.