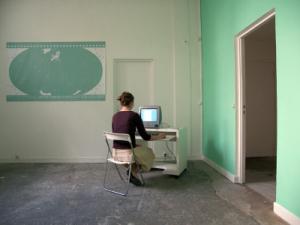 Siding with the Barbarians

Two radical artists have set up an immigration agency, a political consulting firm, a Ponzi scheme for marketing contemporary art, and seven other enterprises. Welcome to the mock entrepreneurial art of Société Réaliste.
By John Feffer, Niels Van Tomme | June 15, 2009

Hungarian-born Ferenc Gróf and Jean-Baptiste Naudy of France established Société Réaliste (Realist Society) in 2004. Their organization has spawned 10 distinct entities, from a political consulting firm to an almanac publisher, that all mix art and politics in innovative ways.

With EU Green Card Lottery, for instance, they launched a campaign that drove potential migrants to a website to apply for an imaginary “EU Green Card” — a sharp commentary on global immigration management. Their design agency Transitioners specializes in political transitions, and questions the centrality of revolution and transition in Western society.

Balancing art, politics, design, and research, the Paris-based mavericks produce artworks, exhibitions, publications, and conferences that generate a great deal of debate. Consistently taking the side of the excluded and exploited — what the French call tiers-état (the third estate) — Société Réaliste is conquering the art establishment through its radical political agenda.

NIELS VAN TOMME: What is Société Réaliste exactly? Who are you? What do you do?

SOCIÉTÉRÉALISTE: Société Réaliste is a cooperative, created in Paris in December 2004 by Ferenc Gróf and Jean-Baptiste Naudy. As early as June 2004, we decided to curate an exhibition dealing with the aesthetic relationship between socialist realism and social forms in contemporary art. Socialist Realism being “Réalisme Socialiste” in French, we inverted the term and coined “Société Réaliste” as the title of this curatorial project. After six months of research, we decided to convert our first critical intentions into a positive device. So we created a structure, a cooperative, which produces objects, such as artworks, exhibitions, texts, lectures, etc.

During the last four years, Société Réaliste has created 10 different enterprises, some already bankrupt, through which it designs lines of production. We are running a political trend bureau (Transitioners), an immigration agency (EU Green Card Lottery), a ministry dealing with the politics of the space (Ministère de l’Architecture), a legislative consulting firm (Cabinet Société Réaliste Conseil), a geopolitical numismatics unit (Marka), an almanac-publishing office working on a Rabelaisian utopia (Almanach de Thélème), and a museum dedicated to the study of urban signs (IGM). Three enterprises have collapsed: our public bank account structure (Over The Counter), our company designing marketing models for the field of contemporary art (Ponzi’s), and our counter-biennial (Manifesta 6.1).

NIELS VAN TOMME: With EU Green Card Lottery, you addressed the issue of global immigration through the creation of a fake website, a promotion campaign, and EU green card lottery registration offices. What was your intention with this project?

SOCIÉTÉRÉALISTE: We always try to find entrance points into contemporary forms and structures of political domination. The issue of global migration is one of the most obvious lines of division between a First World and the rest of it. Whereas it is considered a primary right for citizens to choose where they want to live, as soon as it concerns a non-Western person, this right vanishes. As you might know, the struggle of individuals that we in France call “sans-papiers” — migrants without legal papers — has been one of the most specific and most directly political battles of the last 20 years.

We discovered that there exist hundreds of scam websites around the official U.S. Diversity Visa Program, a.k.a. the Green Card Lottery, that try to sell to potential migrants the right to apply to the State Department’s program, a process which is actually free. Dealing with this frontier between legality and swindle in a liberal market society, as well as with institutional design, we have created a website inviting the potential migrants who would want to go to the United States to apply for a non-existing European Union Green Card Lottery. While designing this website, we tried to imagine what European identity might mean compared to its opposite: the other, the stranger, the foreigner, the migrant.

At the beginning of this project, we worked specifically within the U.S. context. We wanted to set up EU Immigration Offices within the United States that would invert the Ellis Island paradigm, counterbalancing one of the most crucial original myths of the American identity. What if, suddenly, for whatever reason, American citizens would start leaving their country to find better opportunities elsewhere, for example in Europe, where most of the American ruling class is originally from?

But, after launching the website, thousands and thousands of potential Third World migrants started applying to our program. From that moment on, the project moved in a new direction, much more relevant to the EU context. At a certain point, we started exhibiting our database. First, we were trying to show how a spectator might distinguish between individuals applying because of the artistic nature of this project and those who applied without understanding it was a fake migration program. Then, we chose to emphasize the “Custom Officer” point of view, by exhibiting thousands of applicants’ portraits and personal data, making visible the invisible barrier between an art spectator, i.e. a first world citizen, and the other kind of spectator of our project, the African or Asian person attempting to run away from their unacceptable living conditions.

Also, since staying in Europe requires papers, we gave free fake green cards to whoever needed one. Based on this artwork, we have extended our own reflections on the status of the foreigner to focus on the core question of cosmopolitanism.

NIELS VAN TOMME: In which way do you understand cosmopolitanism? How are you engaging with this issue?

SOCIÉTÉRÉALISTE: We are not engaging with this issue, we are cosmopolitans and we do cosmopolitics. Basically, politics concerns the polis, the citizen, whereas cosmopolitics concerns the non-citizen, the foreigner. Cosmopolitanism, in the spirit of Diogenes, is talking about politics from the point of view of the systemically excluded. But it is also the starting point if you want to get out: out of Egypt, out of the ghetto, out of prison. In Greek you say exodos, in Latin exodus, the exit. Jacques Derrida established cosmopolitanism more radically. He envisioned it as the only liberation politics possible from a rational, philosophical, and humanist point of view. For him, foreignness is the first and foremost condition of philosophy. Socrates was an Athenian who talked to Athenians as if he were a foreigner.

In Greek, there were two kinds of foreigners: xenos and barbaros. One could talk, the other could not. One could be served, the other could not. With regards to politics, our cooperative systematically takes the side of the barbarians: the exiled, the exploited, the excluded, the segregated, the colored brains, the bad kids, the noisy lost ones, the celestial beggars. In French we use the term “tiers-état,” the “Third Estate,” those who don’t have papers to claim their right to exist, those for whom the police has been invented. In modern times, when they felt that the power was negating their right to live, barbaric Europeans chose the exit button, to go to America for example. And now the U.S. government, whether controlled by the donkeys or the elephants, do not want anyone else, or just very few selected lucky ones. The Green Card Lottery is a computer that gives them the right to go to the U.S. embassy of their country and be checked by a nice security officer, who probably voted for the 44th president, before they have the right to buy an airplane ticket to the United States.

NIELS VAN TOMME: You mention the 44th president of the United States. Do you see any positive changes emerge from the Obama administration?

SOCIÉTÉRÉALISTE: In Europe, one of the most striking places where illegal migrants are dumped, one of the most beautiful venues in the “European Guantánamo Championship,” is the Mediterranean island of Lampedusa. The author of the novel The Leopard, Giuseppe Tomasi di Lampedusa, was an aristocrat from the family that ruled the island for centuries. In the book The Leopard, as well as in Luchino Visconti’s famous film adaptation, there is this sentence, which quite adequately answers your question: “If we want things to stay as they are, things will have to change.” Have you heard about perestroika?

NIELS VAN TOMME: Got it. As you mentioned earlier, Société Réaliste is a cooperative that produces a wide variety of things, ranging from artworks to exhibitions, texts, lectures, et cetera. How do you decide on the artistic outcome, the medium, of a particular work or research?

SOCIÉTÉ RÉALISTE: The problem of the medium is embedded in the very first series of questions asked at the beginning of each project. We work on production schemes, thus we define an area, we design algorithmic machines, and then we create derivatives. For example, when we devised the EU Green Card Lottery, our first goal was to create an Internet scam. Then, we exploited the material that nourished the website — users’ data, graphics, statistics — and we re-instantiated and exhibited them.

NIELS VAN TOMME: Your practice originates from very real social and political subjects. Nevertheless, you still define its outcome as artworks. Do you sense any tension coming from this trend?

SOCIÉTÉRÉALISTE: One can say that we deal with the economic zone called “contemporary art.” Otherwise, we work for our slaves with ourselves, or rather, for ourselves with our slaves: our—S(e)l(a)v[y]—es. Contradictions are constipating only during the revolution’s last supper, like a packaging designed by Rodchenko and Mayakovsky stuck in Stalin’s duodenum.

NIELS VAN TOMME: Which audience do you have in mind when producing the kind of work that you do? What do you anticipate that they take away from it?

SOCIÉTÉRÉALISTE: Marcel Broodthaers had a very nice sign that says “Museum: Kids not allowed.” So, we produce for kids. May they steal and loot as much as they can. Or at least, vandalize something.

SOCIÉTÉRÉALISTE: Debord was a heterosexual maniac, unable to understand what a contradiction is. He divided Europe into two categories: beer countries and wine countries. What about poppy tea? When he thought that Soviet Union was the fake double of the capitalist zone, he did not realize that he was the bastard son of De Gaulle. By the way, Jacques Derrida invented the concept of phallologocentrism after having watched Debord’s La Société du Spectacle on HBO in a motel near Anaheim, California. If you really want to make love, do you care if it happens in a garbage disposal unit? There is no impasse, only lost people. Free GPS for everyone.

NIELS VAN TOMME: Are you currently working on any new projects?

SOCIÉTÉRÉALISTE: We are developing a new collection of political trends for our Transitioners design bureau, entitled London View, dealing with the theme of the 1848 European revolutions. We are extending our numismatic unit Marka by producing designs for new coins. We are compiling elements for a book, Almanach de Thélème, to be published soon. We are post-producing our first full-length movie, about zombie architecture, based on the “love affair” between Ayn Rand and Frank Lloyd Wright. And we shall soon go into real estate. Nevertheless, we enjoy the crisis on weekends licking poppy ice creams.