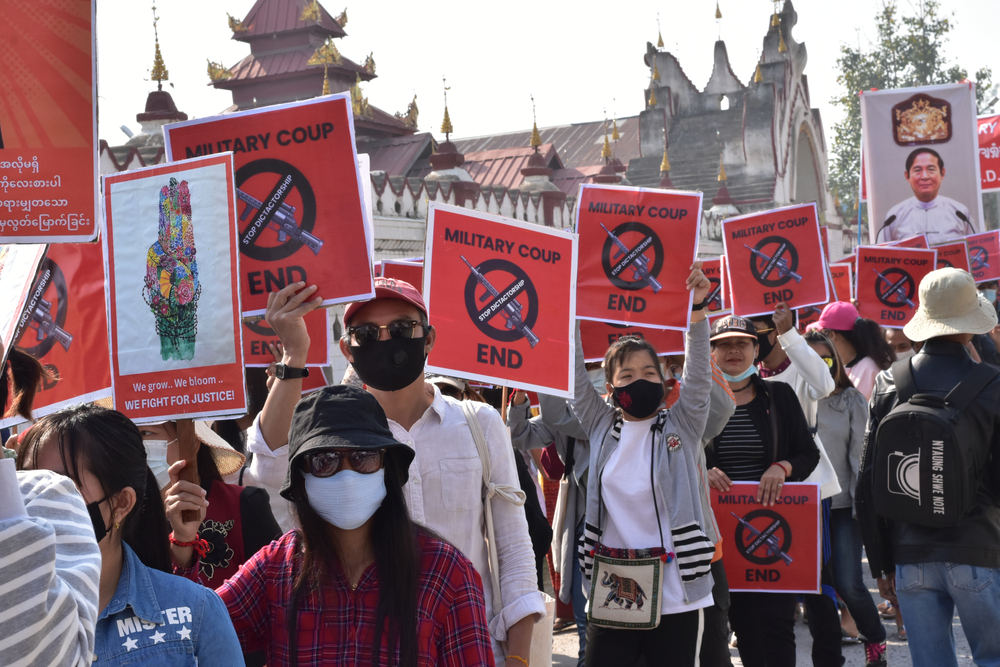 Six Months After Coup, the World Has Failed the People of Myanmar

Brave activists in Myanmar are still resisting the coup -- at great cost. An international campaign to ban arms sales and target gas sales could help.
By Brad Adams | August 4, 2021

Six months after the Myanmar military’s February 1 coup, some things are now clear. Most apparent is that there is no limit on the violence and repression the military under the commander-in-chief, Sr. Gen. Min Aung Hlaing, is willing to use to hold onto power and destroy its opponents.

This, of course, is nothing new for an institution that ran one of the world’s most brutal dictatorships for 50 years, that in 2017 committed what a United Nations-backed international fact-finding mission called genocide against the ethnic Rohingya, that carried out rampant war crimes for decades against other ethnic groups, and that has never taken responsibility for the corruption and poverty that makes Myanmar one of the poorest countries in Southeast Asia.

When the junta arrested political leaders such as State Counselor Aung San Suu Kyi, President Win Myint, and members of parliament, it also effectively nullified the results of the November 2020 elections and implicitly acknowledged that its experiment with “managed democracy” had failed.

The military then resorted to what it knows best: the use of force.

Yet it appears to have misjudged the public response. People quickly poured onto the streets in a massive display of resistance that swiftly coalesced into what is called the “Civil Disobedience Movement.” Faced with the threat of people power, security forces have killed over 900 demonstrators and bystanders, including an estimated 75 children, and injured thousands more.

The junta has arbitrarily detained thousands of protesters, activists, journalists, lawyers, doctors and nurses. Many have been tortured, while all risk falling ill with COVID-19 in the country’s squalid and already overcrowded prisons.

The junta has shut down hospitals and targeted medical professionals, leading to a collapse of the health system as COVID-19 surges across the country. They have arrested journalists reporting on the crackdown, closed independent media, and effectively shut down the internet and phone service after almost daily images appeared showing soldiers and police firing into peaceful crowds.

What is also abundantly clear is that the Myanmar people have no plans to back down. As a friend told me from hiding:

“We have experienced dictatorships for 50 years, coups, annulling the 1990 election, massacres of student protesters, killing of Buddhist monks and nuns in the [2007] Saffron Revolution. Millions of people have marched in spite of soldiers who we know will shoot us. Civil servants have stopped working in protest. People have refused to have anything to do with the state. Many have stopped paying income and sales tax, utility bills, and fees since February 1. We are scared but we are not going to give in to these thugs and let them take away our future.”

Another thing that is very clear is that while some international organizations and governments have talked a good game, the response has gone from inadequate to dismal.

While some leaders have issued strong statements denouncing the coup and announced targeted sanctions against junta officials, they also have cynically decided to hide behind the Association of Southeast Asian Nations (ASEAN), a club dominated by dictators whose chief principle is “non-interference in the internal affairs” of other members. True to form, when ASEAN held a special meeting on Myanmar in April it couldn’t even agree to call for the release of all political prisoners.

The main outcome was a plan to appoint a special envoy, but more than three months later none has been appointed. Knowing that there was no chance that ASEAN would come together to exert significant pressure on one of its own members, the U.S., U.K., E.U., Japan, and Australia nevertheless issued statements suggesting that ASEAN should take the lead in resolving the crisis. The reality is that ASEAN is serving as the perfect foil for the junta, trying to run the clock out in hopes the world loses interest or another crisis explodes elsewhere.

The world needs to end this diplomatic charade. While the U.K., the lead country on Myanmar issues at the UN Security Council, is concerned that China and Russia would use their veto, it should follow the lead of the General Assembly and circulate a binding resolution to ban arms sales. It should also call for the sanctioning of entities that provide the funds that keep the junta afloat. The U.K., U.S., France, and other Security Council members should make it clear that, if Beijing and Moscow do use their veto, they will submit the same resolution over and over again until they relent.

Until then, they should announce a coalition of states that will engage in “maximum, coordinated sanctions” that would block payments to the junta and state-owned enterprises from foreign-financed oil and gas projects, such as those operated by Thailand’s PTT, France’s Total, and the U.S. behemoth Chevron. Gas revenues are the military’s largest source of foreign currency income, adding up to an estimated $1 billion annually in duties, taxes, royalties, fees, tariffs, and other profits. This is the lifeblood of the junta, without which it cannot survive.