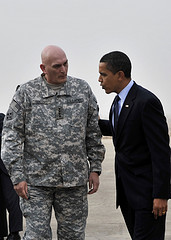 The military brass once again floats the idea of indefinite occupation in Iraq.
By Raed Jarrar, Erik Leaver | March 2, 2010

Last week, President Obama’s out-of-control military brass once again leaked a statement contrary to the president’s position. This time the statement came from Army Gen. Ray Odierno, the top U.S. commander in Iraq, who officially requested to keep a combat brigade in the northern part of the country beyond the August 2010 deadline.

Floating this idea just two weeks before the Iraqi national elections is dangerous for Iraqi democracy, for U.S. soldiers on the ground, and for the future of U.S.-Iraqi relations.

Quickly responding to his soldiers marching out of step, Defense Secretary Robert Gates announced that there would have to be a “pretty significant” deterioration in the security situation in Iraq before he would consider delaying the planned withdrawal. But much of the damage was already done. Those supporting an extension immediately created an echo chamber in the media. Thomas Ricks, senior fellow at the Center for a New American Security, published an op-ed in The New York Times and another in Foreign Policy urging Obama to delay the withdrawals of combat troops scheduled this year, and cancel final troop withdrawals scheduled for the end of 2011. Ricks, who reported the leak by Odierno, is publicly betting that in four years the United States will have nearly 30,000 troops still on the ground. That’s no way to make policy in Iraq. Rick’s Foreign Policy piece went as far as claiming that Odierno “got a polite nod from the president when the issue was raised during his recent meetings in Washington.”

Obama has consistently said he would comply with the August 31 deadline to remove combat forces from Iraq. He repeated this dozens of times on the campaign trail, stated it clearly at Camp Lejeune last year, and also repeated this policy in his Cairo speech. Vice President Biden affirmed this policy numerous times, saying in February, “You’re going to see 90,000 American troops come marching home by the end of the summer.” And just last week, the White House reaffirmed its intention to call an end to operation Iraqi Freedom by August 31.

Congress confirmed the president’s policy by including clear language recognizing and supporting the deadlines for the withdrawal of combat forces in both the FY10 defense appropriations and defense authorization bills. Last month 28 members of Congress, including the chairman of the House Foreign Affairs Committee, sent a letter to Obama commending him on his plan to withdraw combat forces by August 31, regardless of the situation on the ground.

Flying in the face of these consistent messages of assurance by the White House and Congress, Odierno’s statement has harmed the president’s credibility in Iraq and caused the first major storm of criticism inside the country since Obama’s election in 2008.

The Iraqi media has been overwhelmed with political statements, analysis, and press releases condemning the possible prolongation of the U.S. occupation. In one statement, MP Omar Al-Jubouri, a Sunni from the National Iraqi Coalition, rejected the attempts to change the withdrawal plans, telling the Nina News Agency that while he “acknowledges the troubled administrative and security situation,” he still “holds the U.S. forces responsible” for the deterioration. In another statement, covered by Al-Sabaah newspaper, MP Jamal Jaafar, a Shiite from the United Iraqi Alliance, argued that prolonging the U.S. presence “will cause more tension” among Iraqis. Jaafar also stated that the United States must “get an approval from the Iraqi government” if it was planning to leave even “one single soldier in Iraq beyond the withdrawal deadline included in the bilateral security agreement.”

MP Abdul-Karim As-Sameraie, chairman of the Parliamentary Defense Committee, criticized the attempt to change the withdrawal plans and asked again for a public referendum on the bilateral security agreement. Such a measure could result in the cancellation of the agreement, potentially leading to an earlier U.S. withdrawal or having troops operate in Iraq without international legal safeguards.

An Obama flip-flop on the timetable for withdrawing U.S. troops would have serious consequences in the United States and Iraq. The U.S. global image will be tarnished, Obama’s credibility will be called into question, and the administration will likely lose what little global political capital it gained in the last year.

But reneging on withdrawal would have the gravest consequences in Iraq. The Bush administration adopted a conditions-based withdrawal plan. The mantra was “as Iraqis stand up, we will stand down.” But such plans for “condition-based” withdrawal create the very deteriorating conditions that lead to an extension of the military occupation.

Unfortunately, there is considerable support both inside and outside Iraq for the continuation of U.S. occupation. Some groups, such as the Iraqi ruling parties or the military industrial complex in the United States, believe occupation is in their self-interest. Others, such as al-Qaeda, hope to cripple the United States by keeping it engaged in a conflict that takes an enormous toll on human lives, money, and global reputation. And Iran and other regional players fear the reemergence of a strong, independent, and united Iraq.

Obama’s current plan is based on two sets of time-based deadlines that avoid the pitfalls of a conditions-based withdrawal. Obama’s plan to withdraw combat forces by August 31, 2010 and Bush’s bilateral agreement for the withdrawal of all troops and contractors by December 31, 2011 both put the responsibility for military, economic, and political security squarely where it should be: on Iraqis.

Adding more years to the U.S. occupation, as Ricks suggested, or delaying the withdrawal of combat forces, as Odierno has suggested, will cost the United States hundreds of billions more dollars and result in the deaths of countless more U.S. soldiers and Iraqi civilians. Most importantly, it won’t bring Iraq any closer to being a stable and prosperous country.

On the eve of Iraq’s March 7 elections, the president needs to reaffirm the U.S.-Iraqi withdrawal agreement and issue a clear warning to military officers who seek to take the war into their own hands.

Raed Jarrar, Erik LeaverRaed Jarrar is a senior fellow on the Middle East at Peace Action. Erik Leaver is a research fellow at the Institute for Policy Studies.