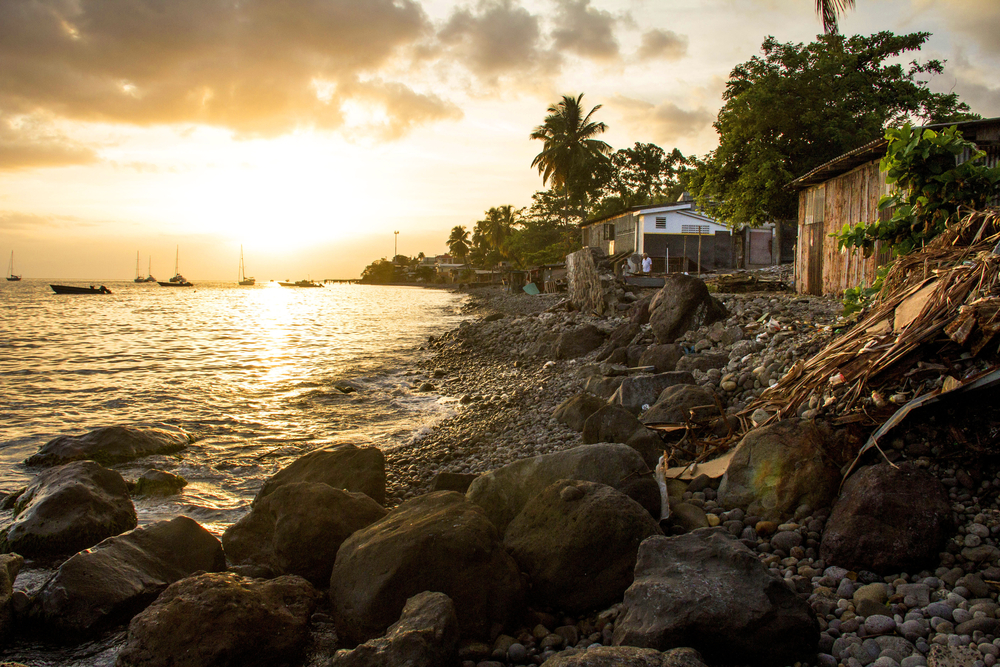 Ambitious climate resilience plans like Dominica’s could be a life raft for the 65 million inhabitants of developing island countries.
By Neil Decenteceo | July 7, 2020

On September 18, 2017, the category-5 Hurricane Maria ravaged the shores of Dominica,  damaging or destroying 90 percent of its buildings and causing damage equivalent to 200 percent of the small Caribbean island nation’s GDP.

In the aftermath, 20 percent of Dominica’s roughly 70,000 inhabitants had to flee due to lost homes or jobs, and 64 lost their lives.

Increasingly intense storms are just one of the ways climate change threatens small island developing states like Dominica, which are least responsible for producing greenhouse gases but face a disproportionate share of the consequences. June marked the beginning of the 2020 Atlantic hurricane season, and scientists are predicting it will be more destructive than normal, with conditions in the Atlantic Basin similar to 2005, a year that produced 27 named storms and 14 hurricanes.

Wealthier countries are shirking their responsibility to act quickly in the face of this threat, but small island developing states — representing a total population of 65 million people — cannot wait any longer for sustainable solutions to the climate crisis. That is why Dominica has embraced the goal of becoming the world’s first climate-resilient nation by 2030.

As the United Nations’ 2016 World Economic and Social Survey explains, “Climate change resilience will demand that social, economic, and ecological systems become capable of reorganizing so as to maintain their essential functions, identity and structure, while also maintaining their capacity for adaptation, learning and transformation.”

In other words, a climate-resilient country must be able to recover quickly and address weaknesses revealed by future destructive disasters. In Dominica’s case, this might mean being able to bounce back from major hurricanes in a few weeks, rather than months or years. The country’s strategy involves a holistic approach to climate resilience, an inclusive community engagement campaign, and engagement with international partners for critical development investments.

As a first step in this effort, Dominica created the Climate Resilience Execution Agency for Dominica (CREAD) in the wake of Hurricane Maria. For the agency, resilience is about more than just durable infrastructure, including roads and hospitals, that can withstand hurricane-force winds. It is also about diversifying and strengthening Dominica’s economy beyond traditional agriculture and tourism, building strong communities with safe shelters, and educating all citizens about the realities of climate change.

Practical projects CREAD has undertaken include updating building codes to make them wind-resistant, providing funding for farmers to plant high-value crops that are more likely to withstand hurricanes, and installing solar panels at hospitals to provide energy even when the electrical grid goes down.

For far more remote, smaller island nations especially threatened by rising seas and coastal erosion, like Tuvalu in the South Pacific, this has meant prioritizing the construction of a sea wall and elevating land much higher than sea level for home construction and agriculture.

It is not enough that a small island government wants to be climate-resilient. There must be buy-in from everyday citizens and local community groups. In a recent interview with PRI’s The World, Pep Bardouille, CEO of CREAD, explained the need to build “collective consciousness” among the Dominican people about the risks climate change poses and what can be done to protect their communities.

To that end, Dominican authorities have worked to foster dialogue with citizens, including through billboards that urge citizens to read about the government’s resilience efforts online and community engagement efforts where canvassers speak directly with citizens about their concerns and options for a safety net.

These efforts allow leaders to learn about how different localities are experiencing climate change and develop solutions together with their constituents. Such an approach is also more likely to foster citizen buy-in and cut down on hostility toward policy directives from on high. In other words, island nation governments should plan long-term, responsive communications campaigns for the communities they serve.

Of course, building climate-resilient infrastructure, green technology, and a more diverse economy is expensive. In fact, CREAD estimates the total cost of its initiatives at about $4.5 to 5 billion over the next decade.

Dominica is likely able to finance up to half of that, so investments from international partners will be needed for the rest. After an impassioned plea by Dominica’s prime minister, Roosevelt Skerrit, at the United Nations in the aftermath of Maria, the country has received pledges totaling $900 million.

Governments in poorer island nations like Haiti, however, might have trouble replicating this kind of program, as their budgets are tighter and have less funding to allocate toward such large-scale initiatives. This underscores the necessity of having regional bodies like CARICOM continue to advocate for greater accessibility to funding from international financial institutions for vulnerable island states.

Dominica’s vision and strategy will be far from perfect in terms of execution. In addition to budget shortfalls, the island has struggled with enforcing its new building codes and convincing citizens to relocate to areas where power, water, and communications would more likely be available after the next major storm. These challenges make its goal of “baking climate change resilience planning into every function of government” a lofty one.

Still, the island’s bold efforts to strive for resilience, even rhetorically, seem more promising for its survival than the alternative, which is to continue demanding that the world’s leading polluters decrease emissions while asking for emergency aid after every major storm. And from a donor perspective, leaders from the UK’s Department for International Development, for instance, have highlighted the attractiveness of investing in the island’s long-term resilience efforts over simply providing emergency aid.

Considering the dire predictions regarding global warming and devastating natural disasters that have occurred in recent years, island nations truly are, as Skerrit described, on the “front line of the war on climate change.” This is a war that Dominica and other small island developing states have done relatively little to cause, yet have no choice but to fight. Still, its holistic framework provides an opportunity for other vulnerable countries to think critically and build stronger interconnected systems and marshal resources from international partners.

Without such efforts, hurricanes like Maria and other climate-related disasters will only continue to become more frequent and destructive.

Neil Decenteceo is an International Development Fellow with the Young Professionals in Foreign Policy.