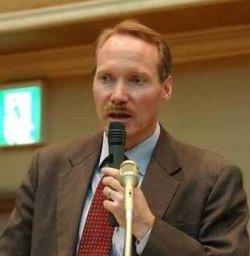 A State Department official resigned after describing Okinawans as "extortionists" and "lazy." Here's the story behind the story.
By David Vine | April 20, 2011

Just days before the recent earthquake struck Japan, a controversy erupted over comments attributed to Kevin Maher, the head of the State Department’s Japan Desk. In news reports that caused widespread outrage and became front page news in Japan, Maher was quoted as describing the Okinawan people as “extortionists” and “lazy.”

The controversial statements came from an account of a briefing by Maher that students from American University in Washington, DC provided a Japanese journalist. I am the professor who arranged and attended the briefing in preparation for a study trip to Okinawa and Tokyo to learn about the impact of U.S. military bases in Okinawa.

In the first days after the story of the briefing appeared, Maher and apologetic State Department officials said the talk had been “off the record” and cast doubt on the accuracy of the students’ account. No one, however, ever denied what Maher said.

More than a month after the scandal broke, and following his demotion and subsequent retirement from an embarrassed State Department, Maher finally broke his silence in a video interview with The Wall Street Journal on Friday. He completely denied the comments as “a kind of fabrication” and said the statements “were not made by me” and were instead written and invented by the students.

In the interest of setting the record straight and based on my own detailed notes from the meeting, I can confirm the accuracy and substance of the students’ report as well as the specific language that has been attributed to Maher. Although I was and am deeply offended and embarrassed by Maher’s remarks, which offered gross generalizations and stereotypes about the Okinawan and Japanese people, I need offer little commentary here. Maher’s words, which I present below, speak for themselves.

As a social scientist, I present quotations from Maher exactly as he spoke them and exactly as I recorded them during the meeting. I have not paraphrased or changed Maher’s words, and I only use quotation marks when I am certain that I captured his exact speech. Any discrepancies between my notes and those of the students reflect trivial differences in our recording of Maher’s remarks. Contrary to what Maher and other State Department officials have said, I have no recollection of Maher or any other State Department employee ever saying at any time before, during, or after our meeting that the proceedings were “off the record.”

Among Maher’s comments that attracted the most anger were those describing Okinawans as masters of “extortion.” While discussing anti-base protests in Okinawa, Maher indeed said of Okinawans, “They’re masters in extorting Tokyo for money.” He later added that Japanese people as a whole have an “extortionist culture…. Okinawans [in particular] are masters at this….They have developed an economy of extorting Tokyo for money.”

The other comments that caused the most pain and offense involved Maher’s characterization of Okinawans as “lazy.” “You’ve got this island mentality,” Maher said of Okinawans, attributing their high rates of divorce, drunk driving, domestic violence, and birth to alcoholism and a taste for awamori, an Okinawan rice liquor. They have traditionally planted sugar cane and goya, he explained, and then waited and waited to cut it down. Now, he said, “they are too lazy to grow it.”

“This is not the politically correct way to say it, but as a man in Okinawa told me, it’s the Puerto Rico of Japan,” Maher added. Like Puerto Ricans, he said, Okinawans have “darker skin,” are “shorter,” and have an “accent.”

Among the many ironies in Maher’s words was his characterization of Okinawans as extortionists when U.S. negotiators like Maher have long pressed the Japanese government for larger and larger contributions to support the U.S. military presence in East Asia. Most recently, Washington has pressed Tokyo for $6.09 billion to move thousands of U.S. marines from Okinawa to Guam. “We’ve got a good deal in Japan,” with forward deployed troops, military bases, and flexibility, Maher told our group. “And it doesn’t cost us anything.”

Calling Okinawans “lazy” is perhaps even more shocking given how many Okinawans have worked tirelessly for decades calling for the withdrawal of U.S. bases from their island, protesting by the tens of thousands and holding daily, continuous sit-ins in at least two locations for years on end. Which is not even to mention the thousands who have long worked as civilians on the bases, cooking the food, cleaning the floors, laundering the clothes, without whom the bases would not function. Having visited Okinawa in December, I can think of many things to call Okinawans — overwhelmingly generous, warm, and welcoming come to mind — but “lazy” is not among them. Maher’s allusion to an “island mentality” and his racialized comparison to Puerto Ricans is all the more offensive for deploying thinly veiled stereotypes and ignoring how U.S. colonization in Okinawa (formally 1945-1972; informally since) and Puerto Rico (1898-present) has shaped many of the sadly real social problems found in both countries.

Despite the hurt that Maher’s comments have inflicted — and for which I apologize as a U.S. citizen — I am actually pleased that such views have been aired. Although it is shocking that Maher has suddenly denied his statements and falsely accused some of my students of “fabrication,” this incident can nevertheless serve as an opportunity for the United States and Japan to investigate some of the attitudes and “mentalities” long underlying U.S. basing policy in Okinawa. It is also a chance to pay serious attention to what Okinawans have to say about the presence of U.S. bases in their lives.

David VineDavid Vine is assistant professor of anthropology at American University, in Washington, DC. He is the author of Island of Shame: The Secret History of the U.S. Military Base on Diego Garcia (Princeton University Press, 2009) and a contributor to Foreign Policy In Focus.