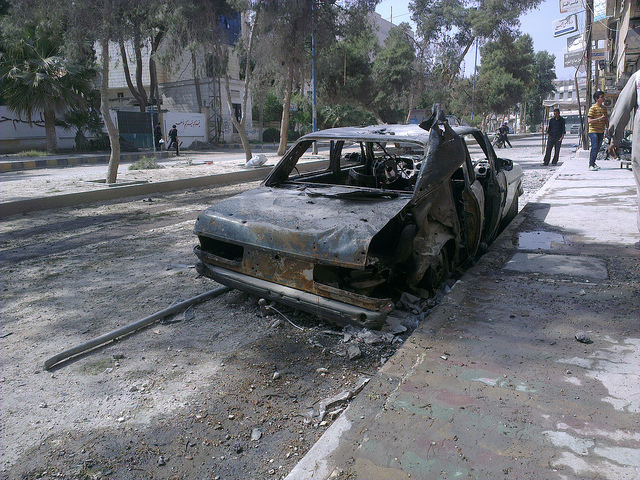 The Smiling Face of the Islamic State

IS, formerly ISIS, elicits cult-like behavior in its followers and those it conquers.
By Russ Wellen | August 26, 2014

No doubt because it expects the caliphate it declared to extend beyond Iraq and Syria, the Islamic State in Iraq and Syria (ISIS) recently changed its name to just the Islamic State (IS). Never mind that Iran is already the Islamic Republic: presumably IS hopes to one day over-run Iran and either drive out or murder its Shia population. Of course, that will never happen. In fact, Iran is mounting a military offensive against IS. At the Daily Beast, Eli Lake reports:

U.S. warplanes striking targets in Iraq. Iranian tanks are reportedly moving into the northern part of the country. But the two foreign militaries fighting the Islamic State of Iraq and al-Sham (ISIS) are not talking to one another.

U.S. and Iraqi officials tell The Daily Beast that, for now, there is no direct channel to coordinate military activities inside Iraq. Instead messages are occasionally passed by senior Iraqi officials who have for years served as interlocutors between Iran and the United States.

Meanwhile, a documentary that Vice News filmed on IS has, rightfully ― it’s a journalistic coup ― garnered much attention. Video of the fighting is second-hand, but, ghoulishly fascinating in another way, is how IS polices the people it has conquered ― yes, thus far anyway, its chief, Abu Bakr al-Baghdadi, is a conqueror. The  members of ISIS go from business to business in the wretched city of Raqqa, Syria, which Vice calls its “de facto capital.” The soldier they focus on smiles as he tells shopkeepers and people on the street not to stray from IS dictates. At one point, he gently advises one man that not only is his wife’s dress too short, it’s made of the wrong fabric.

Most he meets are eager to oblige, including those IS has imprisoned for various offenses. They parrot IS lines, either to avoid trouble or get out of trouble. More disturbing are children who seem brainwashed and recite the IS line with that vengeance all too common to children when they think they’re being righteous and pleasing their elders. Either fascists are a cult or cults are fascist ― take your pick.

The Islamic State might be with us for a long time. Also at the Daily Beast, Martin Dettmer writes that “Counterterrorism expert Brian Fishman” of the New America Foundation says:

… the Islamic State has become a terror army that can only be defeated through a full-scale war with serious fighting in both Iraq and Syria. He argues it “will actually require years, direct military action on both sides of the Iraq/Syria border, tens (if not hundreds) of billions of dollars, and many more than 15,000 troops.”