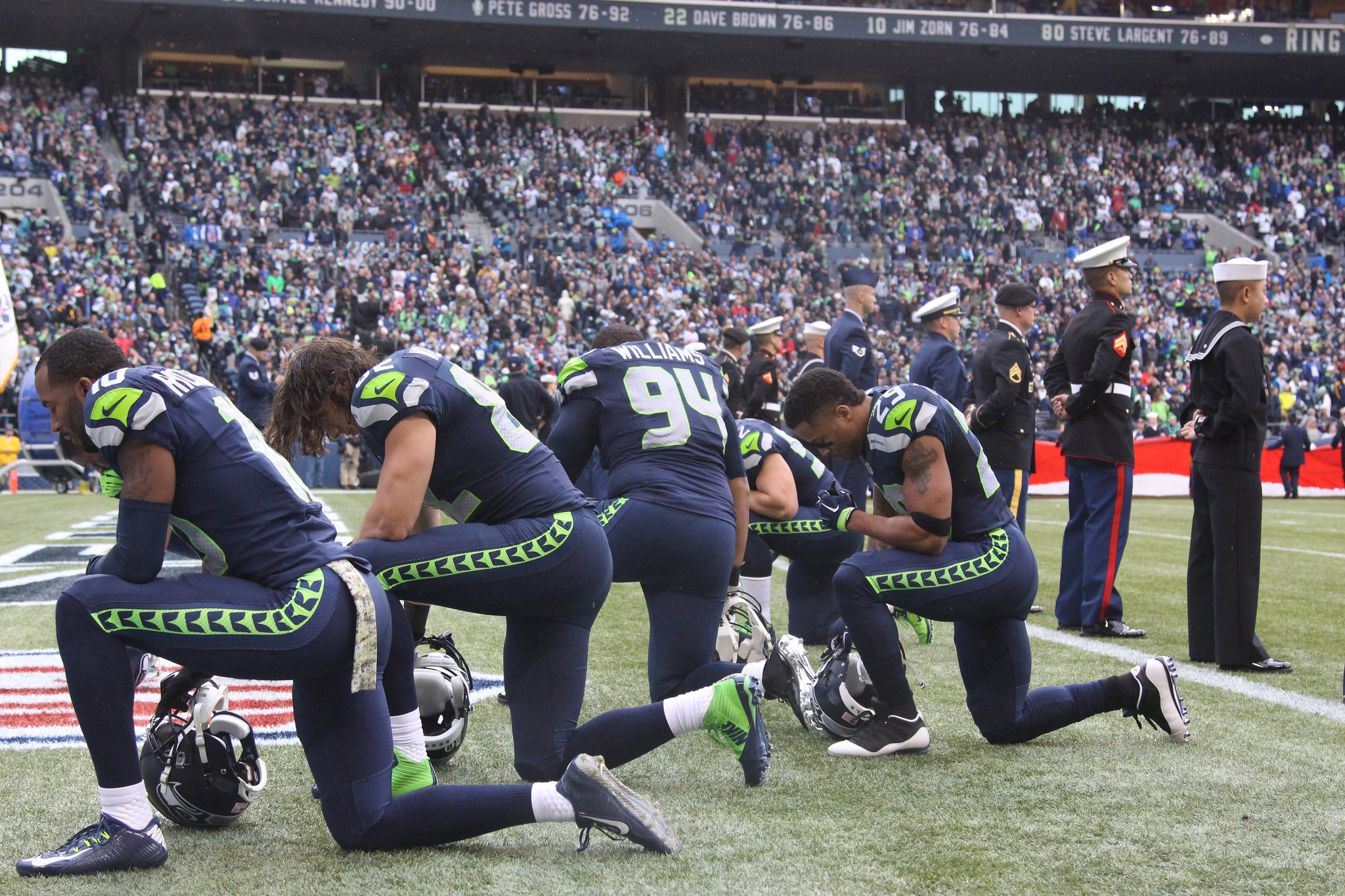 With its huge advertising budget, the Pentagon's turning war into just another game.
By David Swanson | February 9, 2016

Super Bowl 50 was the first National Football League championship to happen since it was reported that much of the pro-military hoopla at football games — the honoring of troops and glorifying of wars that most people had assumed was voluntary or part of a marketing scheme for the NFL — has actually been a money-making scheme for the NFL.

According to a story that broke last year, the U.S. military has been dumping millions of our tax dollars — a fraction of its recruitment and advertising budget, which runs into the billions — into paying the NFL to publicly display love for soldiers and weaponry.

Of course, the NFL may in fact really truly love the military, just as it may love the singers it permits to sing at the Super Bowl halftime show. But it makes them pay for the privilege too.

And why shouldn’t the military pay the football league to hype its heroism? It pays damn near everybody else. At $2.8 billion a year on recruiting some 240,000 “volunteers,” that’s roughly $11,600 per recruit. That’s not, of course, the trillion with a T kind of spending it takes to run the military for a year; that’s just the spending to gently persuade each “volunteer” to join up.

The biggest military “service” ad buyer in the sports world is the National Guard. Its ads often depict humanitarian rescue missions. Recruiters often tell tall tales of “non-deployment” positions followed by free college. But it seems to me that the $11,600 spent on military recruiting could have gone a long way toward paying for a year in college directly! And, in fact, people who have that money for college in the first place are far less likely to be recruited.

Despite showing zero interest in signing up for wars, and despite the permanent presence of wars to sign up for, 44 percent of Americans tell the Gallup polling company that they “would” fight in a war, yet don’t. That’s at least 100 million new recruits. Luckily for them and the world, telling a pollster something doesn’t require follow through, but it might suggest why football fans tolerate and even celebrate military national anthems and troop-hyping hoopla at every turn. They think of themselves as willing warriors who just happen to be too busy at the moment. As they identify with their NFL team, making remarks such as “We just scored” while firmly seated on their most precious assets, football fans also identify with their team on the imagined battlefield of war.

The NFL website explains: “For decades the NFL and the military have had a close relationship at the Super Bowl, the most watched program year-to-year throughout the United States. In front of more than 160 million viewers, the NFL salutes the military with a unique array of in-game celebrations including the presentation of colors, on-field guests, pre-game ceremonies and stadium flyovers. During Super Bowl XLIX week [last year], the Pat Tillman Foundation and the Wounded Warriors Project invited veterans to attend the Salute to Service: Officiating 101 Clinic at NFL Experience Engineered by GMC [double payment? ka-ching!] in Arizona. …”

Pat Tillman, the eponym of the Pat Tillman Foundation who is still promoted on the NFL website, is of course the one NFL player who gave up a giant football contract to join the military. What the Foundation won’t tell you is that Tillman, as is quite common, ceased believing what the ads and recruiters had told him.

On September 25, 2005, the San Francisco Chronicle reported that Tillman had become critical of the Iraq war and had scheduled a meeting with the prominent war critic Noam Chomsky to take place when he returned from Afghanistan — all information that Tillman’s mother and Chomsky later confirmed. Tillman couldn’t confirm it because he died in Afghanistan in 2004 from three bullets to the forehead at short range, bullets shot by an American.

The White House and the military knew Tillman had died from so-called friendly fire, but they falsely told the media he’d died in a hostile exchange. Senior Army commanders knew the facts and yet approved awarding Tillman a Silver Star, a Purple Heart, and a posthumous promotion, all based on his having died fighting the “enemy.” Clearly the military wants a connection to football and is willing to lie as well as to pay for it. The Pat Tillman Foundation mis-uses a dead man’s name to play on and prey on the mutual interest of football and the military in being connected to each other.

Those on whom the military’s advertising succeeds will not typically die from friendly fire. Nor will they die from enemy fire. The number one killer of members of the U.S. military, reported yet again for another year, is suicide. And that’s not even counting later suicides by veterans. Every TV pundit and presidential debate moderator, and perhaps even a Super Bowl 50 announcer or two, tends to talk about the military’s answer for ISIS. What is its answer for people being stupidly ordered into such horrific hell that they won’t want to live anymore?

It’s in the ads

At least as big a focus of the Super Bowl as the game itself is the advertising.

One particularly disturbing ad pitched for Super Bowl 50 was an ad for a war video game. The U.S. military has long funded war video games and viewed them as recruiting tools. In this ad Arnold Schwarzenegger shows what fun it is to shoot people and blow up buildings on the game, while outside of the game people are tackling him more or less as in a football game. Nothing here is remotely warlike in a realistic sense. For that I recommend playing with PTSD Action Man instead. But it does advance the equation of sport with war — something both the NFL and the military clearly desire.

An ad last year from Northrop Grumman, which has its own “Military Bowl,” was no less disturbing. Two years ago an ad that appeared to be for the military until the final seconds turned out to be for Jeeps. There was another ad that year for Budweiser beer, with which one commentator found legal concerns:

First, there’s a violation of the military’s ethics regulations, which explicitly state that Department of Defense personnel cannot “suggest official endorsement or preferential treatment” of any “non-Federal entity, event, product, service, or enterprise.” … Under this regulation, the Army cannot legally endorse Budweiser, nor allow its active-duty personnel to participate in their ads (let alone wear their uniforms), any more than the Army can endorse Gatorade or Nike.

Two serious issues with this. One: the military routinely endorses and promotes the NFL. Two: despite my deep-seated opposition to the very existence of an institution of mass murder, and my clear understanding of what it wants out of advertisements (whether by itself or by a car or beer company), I can’t help getting sucked into the emotion.

The technique of this sort of propaganda (here’s another ad) is very high level. The rising music. The facial expressions. The gestures. The build up of tension. The outpouring of simulated love. You’d have to be a monster not to fall for this poison. And it permeates the world of millions of wonderful young people who deserve better.

It’s in the stadium

If you get past the commercials, there’s the problem of the stadium for Super Bowl 50, unlike most stadiums for most sports events, being conspicuously “protected” by the military and militarized police, including with military helicopters and jets that promised to shoot down any drones and “intercept” any planes. Ruining the pretense that this was actually for the purpose of protecting anyone, military jets showed off by flying over the stadium. In past years, they’ve even done it over stadiums covered by domes.

The idea that there is anything questionable about coating a sporting event in military promotion is the furthest thing from the minds of most viewers of the Super Bowl. That the military’s purpose is to kill and destroy, that it’s recent major wars have eventually been opposed as bad decisions from the start by a majority of Americans, just doesn’t enter into it. On the contrary, the military publicly questions whether it should be associating with a sports league whose players hit their wives and girlfriends too much.

The progressive view of the Super Bowl in the United States questions the racism directed at a black quarterback, the concussions of a violent sport that damages the brains of too many of its players (and perhaps even the recruitment of new players from the far reaches of the empire to take their place), sexist treatment of cheerleaders or women in commercials, and perhaps even the disgusting materialism of some of the commercials. But not the militarism. The announcers thank “the troops” for watching from “over 175 countries” and nobody pauses, sets down their beer and dead animal flesh, and asks whether 175 countries might be too many to have U.S. troops in right now.

The idea the Super Bowl promotes is that war is more or less like football, only better. I was happy to help get a TV show canceled that turned war into a reality game. There is still some resistance to that idea that can be tapped in the U.S. public. But I suspect it’s eroding.

The NFL doesn’t just want the military’s (our) money. It wants the patriotism, the nationalism, the fervent blind loyalty, the unthinking passion, the personal identification, a love for the players to match love of troops — and with similar willingness to throw them under a bus.

The military doesn’t just want the sheer numbers of viewers attracted to the Super Bowl. It wants wars imagined as sporting events between teams, rather than horrific crimes perpetrated on people in their homes and villages. It wants us thinking of Afghanistan not as a 15-year disaster, murder-spree, or counter-productive SNAFU, but as a competition gone into double quadruple overtime despite the visiting team being down 84 points and attempting an impossible comeback.

The military wants chants of “USA!” that fill a stadium. It wants role models and heroes and local connections to potential recruits. It wants kids who can’t make it to the pros in football or another sport to think they’ve got the inside track to something even better and more meaningful.

I really wish they did.

David Swanson is an author, activist, journalist, and radio host. He is director of WorldBeyondWar.org and campaign coordinator for RootsAction.org. Swanson’s books include War Is A Lie. He blogs at DavidSwanson.org and WarIsACrime.org. He hosts Talk Nation Radio and is a 2015 Nobel Peace Prize Nominee. Follow him on Twitter @davidcnswanson and on Facebook.