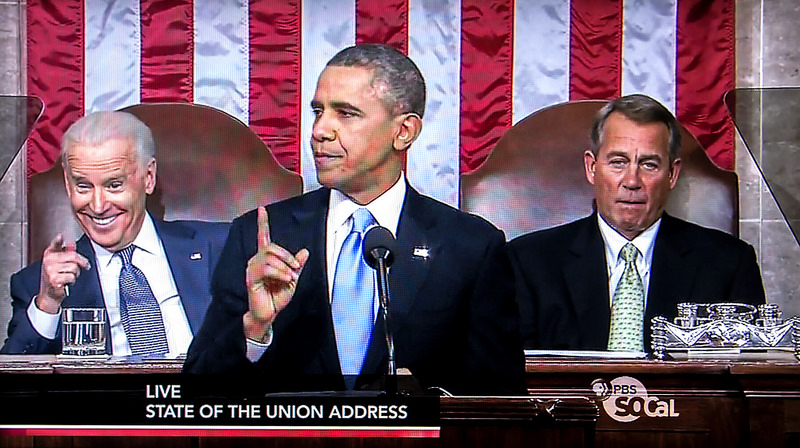 Obama can give himself high marks for charting a new course on Iran. But for the rest, he's going to need some red ink. (Screen grab: Russ Allison Loar / Flickr)

Former law professor Barack Obama went into surprising depth on issues of war and peace during his fifth State of the Union address. Here's how he should grade himself.
By Peter Certo | January 29, 2014

In a State of the Union address that stretched upwards of 7,000 words, President Barack Obama devoted around 1,300 to issues of war of peace. When there’s not an axis of evil to confront or an open-ended war on tyranny to proclaim (and thankfully, there was neither), that’s an enviable chunk of real estate.

What the former law professor offered was something like a report card for his foreign policy to date. Let’s start with the good.

On Iran, Obama reiterated his commitment to the ongoing international negotiations over Iran’s nuclear enrichment program — an effort 60 percent of Americans now support. Directly rebuffing efforts by hawks in Congress to punish Iran even as it cooperates, Obama vowed unambiguously to veto any new Iran sanctions legislation while the parties are still at the table. Obama did give brief credence to the mistaken notion that crippling U.S. sanctions “helped make this opportunity possible” (in reality, Tehran offered Washington a more conciliatory deal over 10 years ago), but his veto threat convinced at least one previous sanctions supporter — West Virginia Sen. Joe Manchin — to agree to “give peace a chance.”

And though he didn’t say so directly, Obama’s boast about getting Iran to agree to inspections that “help the world verify, every day, that Iran is not building a bomb” subtly reiterated an assessment that the U.S. intelligence community has maintained since at least 2007: that Iran is not currently developing a nuclear weapon. Seven years after the government first made that assessment, it’s still much more common to hear politicians declare just the opposite.

Then there’s the passable, such as Obama’s claim that “American diplomacy, backed by the threat of force, is why Syria’s chemical weapons are being eliminated.” It would be more accurate to say that Americans’ overwhelming rejection of Obama’s plans for military intervention in the country — along with an assist from Russian President Vladimir Putin, of all people — is what made diplomacy possible. But I suppose it’s all right to let the White House claim a meager victory here, however disingenuously, as long as Obama recognizes that he’s boxed into the diplomatic track. The real question is why Washington is sending small arms shipments to rebels in Syria even after Americans made it abundantly clear that they’d rather not get involved.

Which brings us to the not-so-good. Obama’s assurance that the war in Afghanistan “is finally coming to an end” didn’t gel with his subsequent admission that thousands of troops could still remain in the country for years to come. He didn’t say how many, but the Pentagon has said it would prefer to keep 10,000 troops in Afghanistan after the 2014 withdrawal date. The CIA is also keen on keeping its drone bases in Afghanistan to continue launching attacks inside Pakistan after the pullout, despite growing public scrutiny of the program and abundant evidence that the cross-border strikes kill civilians, traumatize villagers, and violate human rights.

This is a blatant contradiction, particularly in light of Obama’s (admittedly moving) praise for Cory Remsburg, the gravely injured Army Ranger who sat alongside the First Lady during the State of the Union address. Remsburg miraculously recovered after ending his tenth tour of duty in Afghanistan — his tenth tour — with a head caved in by shrapnel and in a vegetative state. Obama needs to make up his mind. Is this war — which two-thirds of Americans say isn’t worth fighting — really coming to an end, or will more troops see their number of tours climb into double digits?

Obama did proclaim a desire to get the United States off its “permanent war footing” — that’s wonderful. But here the former professor earned some incompletes.

Scouring the text of Obama’s speech, you’d find no explanation for why the United States is plunking down thousands of U.S. troops in Australia and Guam, bulking up its naval forces in the Pacific, hunting down leftist rebels in Colombia, building new drone bases in Africa, or sending arms to increasingly repressive regimes in Egypt and Bahrain, among other places. And to a country that’s increasingly trying to vote its way out of the drug war, Obama failed to explain why we need DEA agents shooting it up with drug traffickers in Honduras, or why he’s keeping marijuana on the list of prohibited Schedule I drugs despite finding it not so different from alcohol or tobacco (though of course, many studies will tell you those two are worse).

Similarly, after an independent federal watchdog determined that the NSA’s surveillance dragnet on ordinary Americans was blatantly illegal and ineffective, it’s hard not to want more from a former constitutional law professor than a single sentence with a vague promise of “reform” — especially since the administration has already ruled out suspending the program and rebuffed calls to offer clemency to the whistleblower who exposed it.

Obama can give himself high marks for charting a new course on Iran, and I suppose he can pass himself on Syria, pending some edits. But for the rest, I hope he still has some red ink left over after running the numbers on the Pentagon.