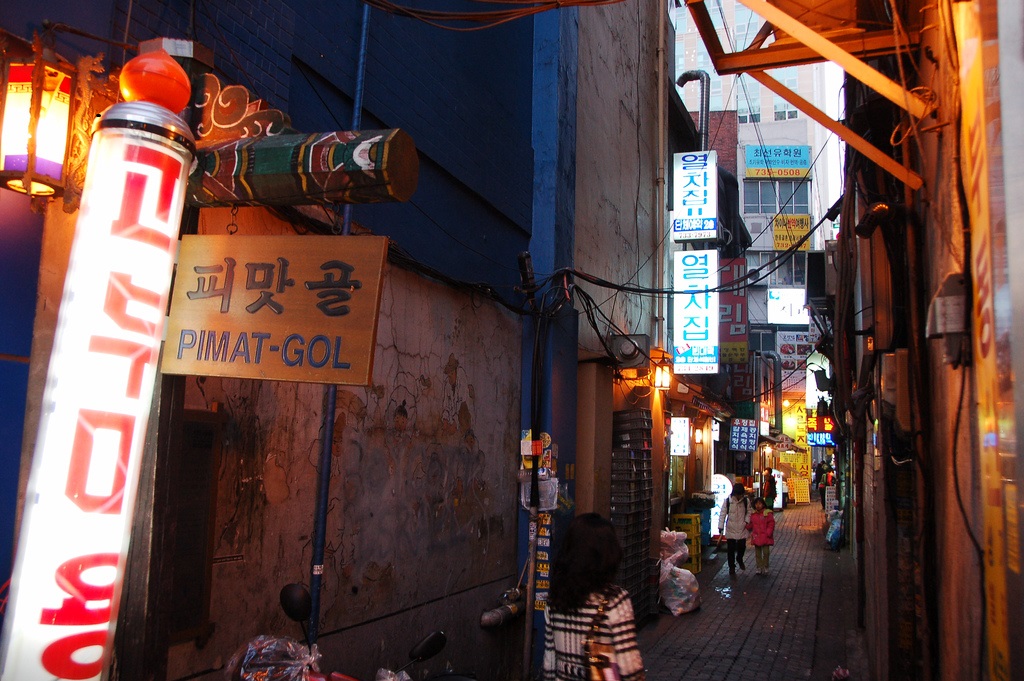 South Korea and the Politics of Patience

In the "fast-fast" political culture of South Korea, some leaders are patiently—and effectively—making strides for democracy, clean energy, and maybe even peace.
By John Feffer | November 5, 2014

For more than half a millennium, this narrow alleyway in the heart of Seoul stretched for several kilometers parallel to and just half block north of the major thoroughfare of Jongno Street. Its name, Pimatgol in Korean, refers to the route that commoners took to avoid constantly bowing to the aristocrats on horses on the main boulevard. When I first visited Seoul in the late 1990s, it was truly breathtaking to walk through the hypermodern city and then duck, suddenly, into this Chosun-era back alley of pungent restaurants and teashops.

Today, only a tiny stretch of Pimatgol remains, along with a commemorative placard and a wooden gate that leads into a half-block of modern storefronts.

The fate of Pimatgol reflects the forward-looking trajectory of South Korea. It is constantly leapfrogging over itself, with barely a backward glance, in an effort to keep pace with early adopter Japan and latecomer China. This is a country not of narrow back alleys but of global firsts: cellphones with the first curved touchscreen, the world’s largest rooftop solar power plant, the world’s biggest tidal power plant, and what will likely be the first 5G wireless system.

South Korea is, as all of its PR materials proclaim, a thoroughly dynamic country, but that sometimes means a regrettable lack of interest in preserving parts of its own past.

Not far from Pimatgol is Seoul’s City Hall, and here Korea has made an interesting compromise between the past and the future. The original building, a stately neo-classical building constructed in 1926, has a problematic history. The Japanese colonial authority ruled the city for nearly 20 years from this structure. Other colonial era buildings have suffered the same fate as Pimatgol—most notably the Government-General building in the Gyeongbok Palace complex, which fell to the wrecking ball in 1995.

But in 2012, Seoul’s mayor presided over the transfer of the Seoul Metropolitan Library to the old City Hall. A Korean architecture firm created a new postmodern municipal building in the shape of a huge glass wave that looms over but stops short of crashing into the old City Hall. Inside the new building are energy-saving features, plenty of natural light, a large wall of greenery, and the mayor’s new office.

This glass-enclosed City Hall perfectly suits the style of Seoul’s current mayor, Park Won Soon, for he has focused on transparency, sustainability, and innovation. When Park won his first term back in 2011, I called him the first mayor of the Occupy Wall Street era. After winning a second term by a large margin in June, he continues to bring the spirit of participatory activism into high places.

In the new City Hall, for instance, Park set up a large room where he convenes two types of gatherings: of ordinary citizens and of experts. “In a total of 46 sessions of listening to people’s opinions concerning municipal policy, 6,224 people have taken part,” the mayor wrote in an August 2013 blog. “Likewise, in a total of 60 deliberation sessions of experts, 1,188 people have participated. Based on our experience, a couple of hours’ discussion usually yields a nice solution. That’s why we make it a rule to hold more than 100 sessions of discussions before formulating an important policy. In other words, we are putting the idea of deliberative democracy into practice.”

The Seoul mayor has directed much of this civic energy into figuring out a new policy on none other than civic energy.

In 2012, the city embarked on a plan to cut energy consumption within two years by the equivalent of an entire nuclear power plant’s annual production (Korea currently relies on 23 reactors that supply about 22 percent of the country’s overall generation). Now, the city is trying to reduce its energy use by the equivalent of two reactors, as well as cut the energy consumption of municipal operations in Seoul by 30 percent by 2020. As the chair of World Mayors Council on Climate Change, Park Won Soon has travelled to other cities around the world to export these best practices.

In a region of territorial clashes and heated rhetoric, Seoul’s mayor has also pursued a vigorous municipal foreign policy. He wants to build bridges with the mayors of Beijing and Tokyo. With the notoriously nationalist Shintaro Ishihara having finally ended his 13-year reign over Tokyo, the new man in the position, Yoichi Masuzoe, is open to city-to-city cooperation. Meanwhile, with North Korea—a harder nut to crack—Park is pushing for a resumption of a tradition that last took place in 1946: the annual soccer tournament between Seoul and Pyongyang.

When I met with the mayor on my visit to Seoul last week, he told me that the city and the country face many urgent problems. But he has learned from the cautionary example of former South Korean president Roh Moo-Hyun that it’s important not to try to do everything at once. Although it’s true that Park Won Soon is currently near the front of the pack for the 2017 presidential race, he reminded me that he can run for another mayoral term after his current one ends. If he resists the siren call of the presidency and stays in office until 2022, the mayor could indeed address a range of issues in a timely manner. It would be a refreshing change from the usual ppali-ppali (fast-fast) approach to political and economic development in South Korea.

A Peace Park in the DMZ?

At the national level, meanwhile, the debate continues to be focused, as it usually is, on North Korea. Human rights activists have been sending balloons into North Korea carrying leaflets, movies on USB drives, bibles, and even coveted sweets. Because North Korea has threatened to start a war over these balloons, however, the South Korean government has tried to discourage this activity. As I write in Korea’s Balloon War, these activists should reconsider their tactic, given the risks the balloons pose to Koreans on both sides of the DMZ.

I had a chance to spend an evening with a North Korean defector and talk for three hours over seafood pancakes and makkoli (a kind of rice wine). He told me that the regime’s stability derived from its multiple levels of surveillance, with three sets of watchers from the Party, the secret police, and the regular police all keeping tabs on each other and everyone else. Given this nearly impregnable structure, he didn’t expect North Korea to change from within, not until a new generation took over the political scene. He left behind a number of friends who had much the same worldview as he. But they stayed in the Party. In another decade or so, they would have more power within the system—but would they also have power to change the system?

The balloonists want to precipitate the collapse of the regime up north. But others still hold to the promise of inter-Korean cooperation. They believe that it’s possible to engage pragmatically with North Korea. But that requires listening to what North Korea wants.

Once it gets beyond its anti-balloonism, North Korea has two demands to improve inter-Korean relations. It wants to reopen the Kumgangsan tourism project—which once brought more than a million South Koreans to the Kumgang mountains on the east coast of North Korea—and it wants a repeal of the May 24 sanctions that South Korea imposed after the sinking of the Cheonan vessel. These are not easy demands to meet, since North Korea hasn’t admitted responsibility for sinking the Cheonan, much less apologized for it, and the Kumgang project ended because North Korean guards shot a trespassing South Korean tourist.

Still, there might be some interesting workarounds to these problems, as North Korea analyst Kim Changsoo told me in Seoul last week. The prohibition against economic interaction with the North has some important exceptions, including the Kaesong Industrial Complex and foreign joint ventures. Posco and Hyundai Merchant Marine are teaming up with Russian and North Korean partners in Najin to connect the rail between North Korea and Russia. It would be interesting for Chinese and South Korean companies to join up to invest in various projects in the North. Rather than push for a repeal of the May 24 measures, investors could simply focus on multiplying the exemptions.

South Korean President Park Geun-hye, meanwhile, has talked about turning the DMZ into a peace park, and the government has even set aside $37 million to put the idea into practice. Kim Changsoo suggests establishing a park between the two mountains of Kumgang in the North and Sorak in the South that would take advantage of the Kumgang facilities and serve as an indirect way of reopening the tourism complex. The 70th anniversary of the division of the two Koreas is coming up next year and would be a perfect time to hold an inter-Korean summit to announce such a venture.

Much depends on North Korea’s willingness to engage with its richer, more modern neighbor. In many ways, North Korea is one big Pimatgol—a back alleyway where 25 million people avoid kowtowing to the global economy and the international community. It is stubbornly old-fashioned in so many ways: its rigid class structure, feudal political structures, and traditional social customs. It styles itself as the “pure” Korea compared to the hybridized South.

There are some in South Korea who would like to subject the North Korean Pimatgol to a thorough urban renewal as part of reunification through absorption. But this Pimatgol, unlike the largely defenseless Seoul alleyway, has a big army, a nuclear arsenal of unknown size, and an uncompromising attitude. The balloon activism of these regime changers makes for splashy headlines and good photo ops. But it only makes the North Korean Pimatgol strengthen its defenses.

The more patient approach of politicians like Park Won Soon and analysts like Kim Changsoo, on the other hand, is more likely to produce a workable compromise between north and south, modern and traditional, and the back alley and the global thoroughfare.