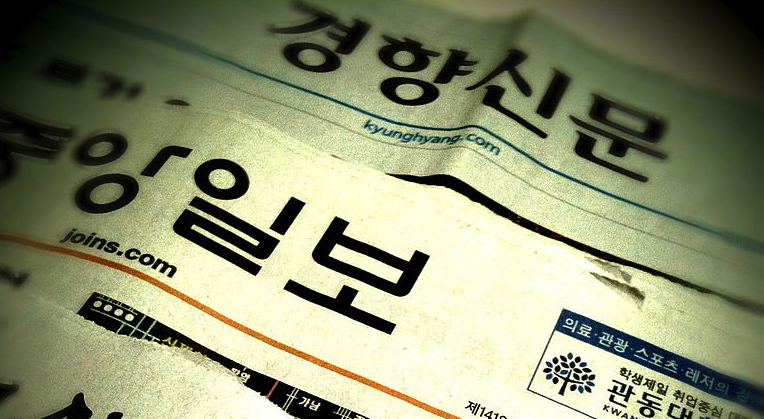 Criminal indictments for defamation have more than doubled in South Korea, chilling free speech and giving pause to critics of President Park Geun-hye and her party.
By Geoffrey Fattig | December 3, 2013

When South Korean President Park Geun-hye touched down in Paris last month, she was greeted by a small group of demonstrators protesting the interference of the country’s National Intelligence Service (NIS) in the presidential election last year.

Despite Park’s recent vow to clear up any suspicions surrounding the agency, the scandal has continued to evolve since the controversial resignation of Prosecutor General Chae Dong-wook in September, who many felt had been forced to step down for pursuing the investigation too vigorously. In the last month alone, a second prosecutor involved in the case has been relieved of his duties and placed on suspension, a close confidante of Park’s chief of staff was nominated to fill Chae’s position, and the inquiry has grown to encompass the Cyberwarfare Command of the Korean military.

To be sure, these are distressing developments. Yet the seemingly daily twists to the story have helped mask another problem with Korea’s young democracy, an issue that was brought into stark relief by Kim Jin-tae, a lawmaker from Park’s conservative Saenuri party who was accompanying the president on her European trip. Upon seeing the protestors, an incensed Kim threatened to have them photographed by the Justice Ministry and wrote on his Facebook page that he would “make them pay a steep price.” Kim also wondered how such people could call themselves Koreans.

These comments may sound shocking to those who view protest as a necessary component of a healthy democracy—a list that would include Dr. Martin Luther King, who, when comparing dictatorships with democracies, famously stated that “the greatness of America is the right to protest for right.” Sadly, this idea does not seem to resonate with those in the South Korean power structure, who have presided over a noticeable decline of freedom of expression in recent years.

In 2011, the country’s press freedom ranking was downgraded by the human rights organization Freedom House from “Free” to “Partly Free” as a result of “increasing official censorship, particularly of online content, as well as the government’s attempt to influence media outlets’ news and information content.” On a visit to Seoul in May of 2013, United Nations special rapporteur for human rights defenders Margaret Sekaggya harshly criticized the Korean government’s use of criminal defamation statutes and the National Security Law for creating a “chilling effect” and “leading to self-censorship” among human rights advocates. She further warned that the country was falling short of international standards for freedom of expression, peaceful assembly, and association. 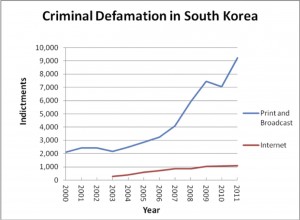 South Korea began prosecuting Internet defamation after the passage of the Act on the Promotion of Information and Communications Network Utilization and Data Privacy in the early 2000s. (Source: Freedom of Expression in South Korea, Stephan Haggard and Jong-sung You, UC San Diego, August 2013).

While many countries have taken steps to decriminalize defamation over the past decade, criminal indictments for defamation cases have more than doubled in South Korea, from roughly 5,000 in 2007 to over 10,000 in 2011, according to a report by UC San Diego professors Stephan Haggard and Jong-sung You. These have included several high-profile cases, with the prosecution of Jung Bong-ju—co-host of the popular Naneun Ggomsuda (“I’m a Petty Trickster”) podcast—being perhaps the most prominent. In 2011, Jung was given a one-year prison term for alleging that then-President Lee Myung-bak had been involved with a shady investment firm, BBK, that had made millions by manipulating stock prices. (Ironically, in the 2007 presidential election, Park Geun-hye herself had made similar allegations against Lee, which perhaps unsurprisingly went unpunished.) A former lawmaker, Jung is now unable to hold public office for the next 10 years as a result of the conviction.

Earlier this year, two of Jung’s podcast co-hosts, Kim Ou-joon and Choo Chin-woo, were hauled into court for alleging that Park’s younger brother, Park Ji-man, was involved in the murder of a relative. The pair was also accused of repeatedly making defamatory comments about the president’s father, Park Chung-hee, but was eventually acquitted by a jury on both charges. Had they been convicted, both men would have likely faced serious jail time, as the country’s strict laws carry a maximum sentence of seven years in prison for defamation of a public figure. Despite their acquittal, the podcast, which at its peak was averaging over 2 million downloads per week, is no longer on the air.

“One of the problems [with criminalizing defamation] is that, even if a person is acquitted, they still have to endure the personal and financial hardships that come with a lengthy trial and appeals process. This can discourage people from speaking out,” said Professor You, who himself is no stranger to the rigors of a defamation trial. In the 2012 National Assembly election, You was working on behalf of his wife’s campaign when he sent an e-mail to district voters referencing a story in the Shindonga magazine which implied that his wife’s opponent, Jung Tae-gun, had abused his political office for personal financial gain. While the paper did not give provide “smoking-gun” evidence, You felt that there was at least enough to warrant suspicion of wrongdoing.

After Jung’s defeat in the election, he went to the public prosecutor’s office and had You charged with violating Korean election law by spreading false facts about a political candidate. You maintained that he simply wrote that there was “suspicion” of abuse of power on the part of Jung, but was nevertheless convicted and given a six-month prison sentence. He appealed the decision, and the conviction was thrown out by the Seoul High Court last month.

Perhaps not coincidentally, You’s wife, Democratic Party Representative You Sung-hee, is now preparing bills that would make defamation a civil rather than criminal offense, and limit the application of election law to cases that are intentionally false or malicious. “There is an international convergence toward American thinking on freedom of expression,” explained Professor You, who is helping draft the legislation. “These bills would bring South Korea more in line with international standards.”

Unfortunately, with the minority Democratic Party locked in a bitter struggle with Park’s Saenuri Party over the NIS scandal, it appears that Representative You’s bills will most likely languish in the Assembly for the time being.

Meanwhile, Park’s government is showing no signs of easing up on free speech anytime soon. Just last month, the Justice Ministry took the unprecedented step of asking the Constitutional Court to disband the United Progressive Party, on the grounds that the party platform “pursues North Korean style socialism,” which it says “violates the basic democratic order” of South Korea. If the court accepts the government’s petition, it would be the first time that a South Korean political party has been banned since the authoritarian regime of Syngman Rhee, the country’s first president.

South Koreans are justifiably proud of their hard-won democracy, which came as the result of immense struggle and hardship. However, maintaining democracy requires that governments give space to dissenting voices and opinions—and more importantly, provide institutions to safeguard those rights.

Park’s government had a chance to reverse South Korea’s troubling downward trend in freedom of expression upon taking office in February. Unfortunately, by seeking to limit those freedoms, the administration has only accelerated the decline.

Geoffrey Fattig is a graduate student at UC San Diego’s School of International Relations and Pacific Studies. He lives outside Seoul and writes about Korea at www.jeollamite.com.