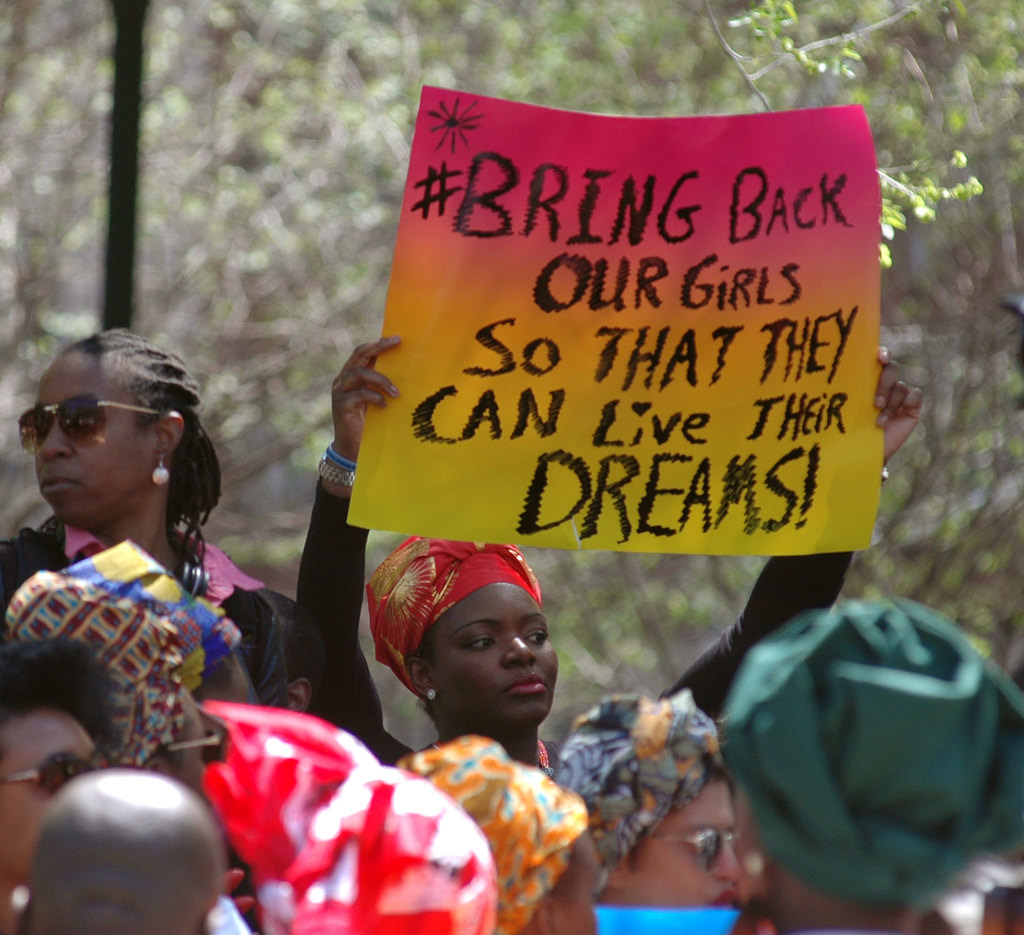 It took the Nigerian government the better part of a month to respond to the violent kidnapping of girls who were just trying to get an education. Girls who, despite incredible poverty and a widespread cultural belief that girls should not go to school, get up every morning and go to where they hope will be a safe space to learn. (Photo: Michael Fleshman / Flickr)

Standing Up for Girls’ Education in Nigeria

Many families in Nigeria are already skeptical about women's education. The Nigerian government's failure to protect schoolgirls makes it worse.
By Zoe Blumenfeld | May 9, 2014

It took Nigerian President Goodluck Jonathan 18 days to set up a rescue committee to find the 276 girls who were kidnapped from their school last month.

Let’s say that one more time: it took the Nigerian government the better part of a month to respond to the violent kidnapping of girls who were just trying to get an education. Girls who, despite incredible poverty and a widespread cultural belief that girls should not go to school, get up every morning and go to where they hope will be a safe space to learn.

“I am frustrated,” said one Nigerian activist and Global Fund for Women ally who requested anonymity. Many of her fellow activists are being detained and questioned by police for speaking out about the horrific crime. “The response has been slow, too little, too late, or none at all. Citizens are demanding information—basic, accurate information that will reassure the public that something tangible is being done about the attacks.”

As Nigeria hosts the World Economic Forum this month, 70 percent of the country’s predominantly Muslim population in the northeast lives on less than a dollar a day. To incentivize families to send their girls to school and keep them enrolled, women’s organizations and other NGOs pay families via conditional cash transfers that are used to pay school fees, according to our anonymous source. Women work hard to match girls with female role models who encourage them to continue their studies.

“This attack has come at a very fragile time when trust for the school as a safe space for girls was just being built,” said the Nigerian activist. “Families who traditionally do not believe in girls going to school will be less likely to see any benefits in sending their girls to school because of the stigma attached to rape and sexual violence.”

Reports of the kidnapped girls being forced to marry Boko Haram members are nothing new. Our source says Boko Haram, the terrorist group that has claimed responsibility for the kidnapping, uses forced marriage, sexual violence, and trafficking as weapons of intimidation. In a recent video, a man claiming to be the group’s leader, Abubakar Shekau, confirmed that Boko Haram had captured the girls and said he was going to “sell them in the marketplace.”

“Terrorists have adopted a technique of dropping small sums of money on the floor and forcefully abducting young women from their homes,” explained the Nigerian activist. “The practice, which is interpreted by Boko Haram as a form of marriage in an attempt to legitimize their crimes, has been condemned by many Muslims.”

Boko Haram has been fighting an insurgency in northern Nigeria for the past five years. Its agenda is political and complex, with education representing just one component. Recently, the violence has escalated. Just a few months ago, the group killed 59 students at a boarding school, many of whom were burned to death. On the same day that the schoolgirls were kidnapped in Chibok, a bomb blast also claimed by Boko Haram killed 75 people in Nigeria’s capital, Abuja. Earlier this month, at least eight girls between the ages of 12 and 15 were also kidnapped, and details are still emerging about a deadly attack that left over 300 people dead in another Nigerian village.

“Pure Islam is mostly protective of women and demands respect for women,” said the Nigerian activist. “Boko Haram and other religious fundamentalists with violent ideologies bring in their own doctrine, which is seen as an adulterated version of Islam by genuine adherents.”

Nigeria has a rich herstory of women standing up against great odds for their rights—including the Aba Women’s Protest, when women peacefully organized only to be violently repressed by colonial leaders, and more recently in Plateau State, where women marched topless to get the world’s attention and end violence. And now the world is watching as women use their collective voice to demand their rights and a safe return of their girls.

To support collective action, the Global Fund for Women, in partnership with the African Women’s Development Fund, is awarding an emergency grant to women’s groups in northern Nigeria and sending a letter to Nigerian ambassadors in the United States and West Africa urging their governments to take action.

Social media has become a powerful force in this crisis. Women-led protests are being amplified worldwide with the hashtag #bringbackourgirls. Our source sees social media as a tool to pressure corrupt governments, which she hopes will shame the Nigerian government into being accountable to its citizens.

“It is crucial,” she explained, “for the international community to keep up their support through demonstrations, sanctions, and diplomatic pressure as a clear sign of condemnation of the inadequate government response to violence against women.”

Zoe Blumenfeld is the communications manager at the Global Fund for Women and a guest columnist for Foreign Policy In Focus.