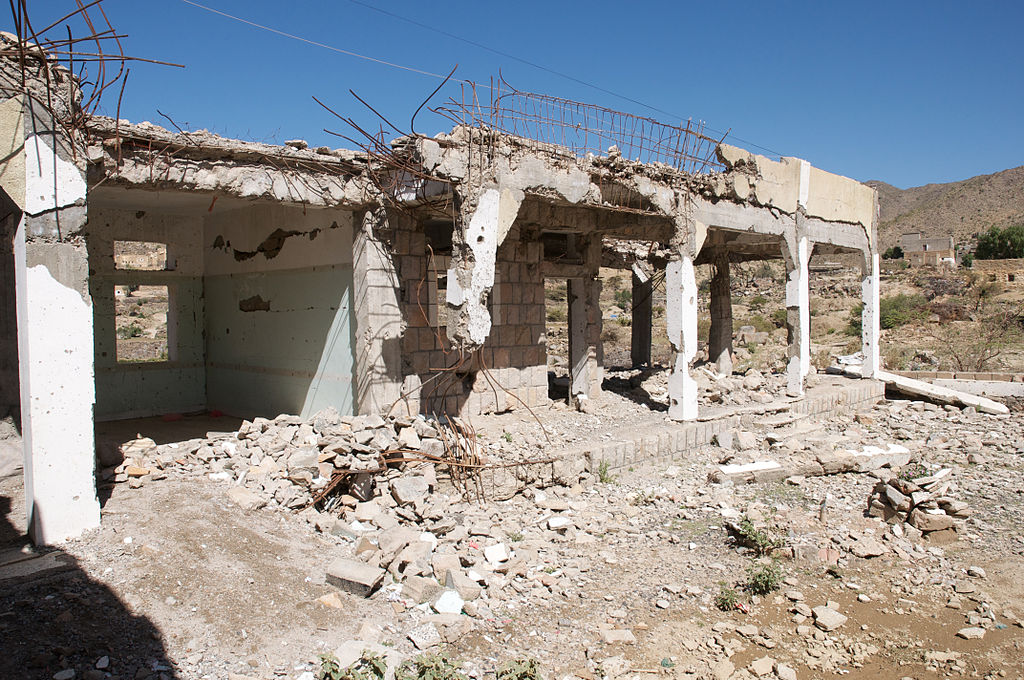 Starvation and Cholera in Yemen

The current war in Yemen has had devastating consequences for the population. The indiscriminate Saudi bombing includes schools, water purification plants, hospitals, and electricity plants, leading to the death of over 10,000 and the wounding of 50,000 more. By the end of 2017, the International Red Cross has projected that over a million Yemenis will have suffered from cholera. So far, 900,000 people have been infected, and 2,000 have did, 1,200 of them children. Faced with no fuel for its water-treatment plant due to a Saudi blockade that relies on US military support, Yemen is starving, has little access to clean water. An outbreak of diphtheria has further complicated the crisis.

The Saudis see the current conflict, which originates in a Houthi–led insurgency in 2015 and follows years of sectarian strife, as a border threat, which has only been exacerbated by a ballistic missile launched from the mountains of Yemen at Riyadh, the capital of Saudi Arabia, on November 4. On November 6, the blockade began, creating more misery among a population already suffering from years of war, including atrocities committed by the Houthis.

Americans, as Saudi-coalition allies, are providing an aircraft carrier, electronic intelligence, and guided aircraft to target bombing locations. Yet this war receives little attention, with few exceptions, from US media. Labeled a proxy war between Saudi Arabia and Iran, this conflict has come to the attention of Congress, where the House of Representatives passed a resolution calling US action “unauthorized” (compared to counterterrorism measures, which are authorized).

The blockade, put in place to “stop the flow of arms from Iran,” had not even allowed chlorine-disinfecting tablets for water to pass to Yemen’s desperate citizens. A recent temporary lift of the U.S/Saudi Arabia blockade of Yemen may provide a temporary respite for millions of starving Yemenis. But with an unsanitary environment that is degrading rapidly, and a dearth of clean drinking water, far more than a temporary lift is needed to ameliorate this catastrophe.

Led by Saudi Crown Prince Mohammed bin Salman (MbS)—who will become a king upon the death of his ailing father, the king—the Yemen blockade is just one of the first actions the crown prince has taken in his grab for power both internally and internationally. His boycott of Qatar, which is supported by nearly all of the Gulf States, shows no sign of ending. He attempted to install a friendly government in Yemen with Abd-Rabbu Mansour Hadi as president. Hadi currently lives in Saudi Arabia for fear that rebels will kill him. MbS has also interfered in Lebanon in cahoots with the Israelis to eliminate Hezbollah by kidnapping Prime Minister Saad Hariri during his visit to Saudi Arabia (Hariri was released two weeks later).

MbS is running this war against Yemen with a vengeance and a total disregard for humanitarian consequences. He wants to prove his prowess and the power of his new ideas. He claims to be weeding out corruption, with the arrest of nearly 400 of the most influential men in Saudi Arabia: princes, cabinet members and billionaires “jailed” in the Riyadh Ritz-Carlton. Reports suggest that their billions will be confiscated to help the strapped coffers of the government due to low oil prices.

The Saudis are quick to point out that Iran is smuggling weapons, even though there is little evidence that Iran is sending a lot of weapons to the Houthis. The Saudis, however, are building their arsenal. They recently signed an agreement to buy over $110 billion of U.S. weapons over and above the many billions of dollars authorized in previous trade deals.

Even more alarmingly, MbS lashes out at Iran with bellicose rhetoric to frighten and reduce Iranian influence in the Middle East, posing a risk of war with Iran while dragging the U.S. and Israel into the fray. The Crown Prince’s interference throughout the region is an ambitious undertaking for a 32-year-old leader.

Yemen is one of the poorest countries in the world. The war is taking Yemen back to the dark ages. It is an immoral war, and it is a humanitarian disaster. The United States cannot and should not participate in such a slaughter.

Adil E. Shamoo is an associate fellow of the Institute for Policy Studies, a senior analyst for Foreign Policy in Focus, and the author of Equal Worth – When Humanity Will Have Peace. You can download the book free at: www.forwarorpeace.com . He can be reached at ashamoo@gmail.com.