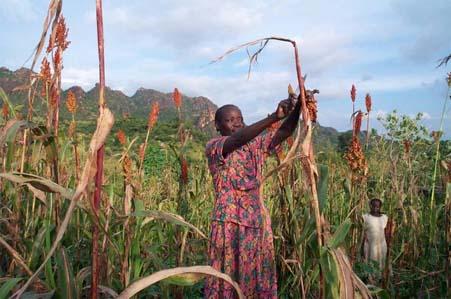 President Obama's latest initiative for Africa, Feed the Future, is likely to end up feeding the corporations eager to make a profit off of African farmers.
By Beth Tuckey | August 11, 2010 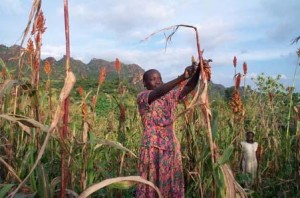 In what may be President Obama’s most significant foray into changing U.S.-Africa policy since his election in 2008, the United States is embarking on a new initiative to boost agricultural production in the global south. Feed the Future (FTF) came out of the G8 summit in L’Aquila in 2009 where developed country leaders committed to acting to “achieve sustainable global food security.” Obama pledged $3.5 billion over three years toward this goal, in hopes that other rich nations would also make significant investments in agricultural development.

Food security, however, does not equal food sovereignty, nor does it ensure that the roots of hunger in the world’s poorest countries will be addressed. Feed the Future is likely to be yet another program that benefits large corporations and does little to address the real issues hindering agricultural growth in Africa, Latin America, and Asia.

On June 14, 2010 USAID Administrator Rajiv Shah addressed a food security meeting of the Economic Community of West African States (ECOWAS) in Dakar, offering support for “country-led, evidence-based strategies” to advance agricultural growth. He reiterated the Obama administration’s commitment to partnering with African nations to break the cycle of hunger and poverty in Africa.

And while Shah admirably noted the role of women in agriculture and the importance of civil society in carrying out the FTF initiative, he stopped short of acknowledging the tremendous potential for agricultural development that already exists on the continent. For instance, there is the Tigray Project in Ethiopia that boosts food production through agro-ecological methods, and the System of Rice Intensification (SRI) in Madagascar that uses organic and sustainable methods to increase rice yields as much as sevenfold. Instead, Shah spoke of new seed varieties introduced in Mali and the market viability of USAID-supported farming in Ghana.

This is hardly surprising coming from Shah, who recently served as the agricultural development director at the biotech-friendly Gates Foundation. The Gates Foundation is a primary funder of the Alliance for a Green Revolution in Africa (AGRA), which despite its sustainability rhetoric is a vehicle for the promotion of genetically modified (GM) seeds in Africa. The revolving door doesn’t stop there, however. Obama has brought a squad of pro-biotech officials into his administration, including former Monsanto Vice President Michael Taylor and former vice president of the lobbying group CropLife, Islam Siddiqui.

Therefore, it is no surprise to hear FTF officials talk about the power of new seed varieties in ending hunger in Africa, despite their potentially disastrous consequences. The history of GM seeds and the green revolution in Asia shows that such approaches serve only to augment the profits of corporations like Monsanto while driving small farmers into debt. Although the green revolution in Asia did boost yields, study after study on African agriculture proves that organic, non-GMO agriculture is “better for food security than most conventional systems and is more likely to be sustainable in the longer term.” Farming with GM seeds and fertilizers is a very top-heavy method that does not address the true causes of hunger and instead approaches food insecurity as a profit-making opportunity. Mamadou Goita, the executive director of the Institute for Research and the Promotion of Alternatives in Development (IRPAD) based in Mali, recognizes that “as is always the case with Africa, once again the world is obsessed with addressing the consequences while blatantly ignoring the root causes of the problem.”

Many of these roots of hunger were planted in the 1980s by the International Monetary Fund (IMF) and World Bank’s Structural Adjustment Programs (SAPs), which bankrupted Africa of its crop diversity and traditional farming methods in favor of large-scale, market-led production. In fact, just as the United States began heavily subsidizing its own big industrial farms, the IMF prohibited African countries from subsidizing their own agricultural systems.

The result was a dumping of surplus goods such as rice and wheat from the United States into African economies. Local farmers couldn’t compete with the prices and therefore couldn’t sell their products even in their own communities. To make matters worse, many farmers had switched to export-worthy staples and away from traditional crops, making it even more difficult to feed their families.

Though the FTF initiative does encourage host country governments to consult with civil society, its tight relationship with companies like Monsanto will severely undermine local and regional sovereignty over food resources. Monsanto has a history of hooking poor farmers on seeds and accompanying herbicides and pesticides they cannot afford to buy. Furthermore, though the Danforth Plant Science Center, one of FTF’s partners, may hail the creation of a nutrient- and protein-rich cassava plant, it fails to recognize that crop diversity — and thus diet diversity — is nature’s best remedy for nutrient deficiencies. By introducing single, silver-bullet crops into African soils, FTF risks creating a continent of monocrops that contribute to environmental degradation and declining human health, and which put societies at great risk if the crop fails.

At a recent U.S. House of Representatives hearing on FTF, members of Congress raised very few of these questions about the risks of GM seeds. On the whole, they welcomed the testimony of representatives of Monsanto and the Danforth Plant Science Center, both of whom hailed the potential benefits of “better” seeds. Even if those seeds can produce higher yields in the short term, more food does not mean less hunger or less poverty and a green revolution will not cure the problem of chronic hunger in Africa. A more sustainable solution involves approaches such as using indigenous varieties of crops that are drought-tolerant, teaching farmers about organic methods of composting and fertilizing, and planting a diversity of crops, thereby generating healthier soil. The best thing the United States could do with FTF is to promote and enhance traditional, agro-ecological methods of farming — but then again, that wouldn’t be profitable for private companies like Monsanto.

Many in Africa remain skeptical of GM seeds, which are often seen as a neocolonial tool by developed nations to further exploit Africa’s vast natural resources. Countries such as Zambia have opposed the importation of food aid that is genetically engineered, and groups like Biowatch in South Africa have led successful legal cases against Monsanto. However, GM crops are already cultivated on a large scale in South Africa, and the absence of a large scientific community in Africa has allowed GMO-producing companies to dominate the debate. International organizations such as GRAIN and Food First are attempting to elevate the concerns around GM seeds in Africa through advocacy and outreach. The information these organizations are producing, along with scientific studies that highlight the health and environmental risks of GM crops, should be widely circulated.

Feed the Future does get a few things right, such as working with agricultural extension services in each individual country, assisting in the construction of roads to help farmers get their products to market, and establishing irrigation systems in dry regions of the world. It also recognizes the importance of country-led development and the necessity of women’s involvement in agriculture projects, both of which are foundational to any development initiative.

However, for these proposals to be successful, FTF must enforce strict accountability and transparency mechanisms, particularly in countries whose governments are notoriously inattentive to the needs and aspirations of their citizens. FTF has chosen 20 countries in which to begin its work; among them are countries like Uganda, whose President Yoweri Museveni is considered corrupt and undemocratic. Thus, for infrastructure projects and extension services to be effective, FTF must ensure funding is carefully monitored and that the outcomes are objectively evaluated.

The global food sovereignty movement is growing. All over the world, communities and farmers are taking greater ownership over their land and food. “Food sovereignty is the people’s right to healthy and culturally appropriate food produced through ecologically sound and sustainable methods, and their right to define their own food and agriculture systems,” offering “a strategy to resist and dismantle the current corporate trade and food regime.” It will be a central area of discussion during the World Social Forum in Dakar in February, moving individuals to organize around the right to control their food and trade systems. By joining this movement in the United States, individuals can act in solidarity with the struggles facing African farmers, consumers, and producers. It will take this and more to change the direction of U.S. agricultural policy abroad and programs like Feed the Future.

Instead of pushing the corporate-friendly elements of FTF, the U.S. government could do more to assist agricultural growth in the global south by targeting the roots of the problem. By enacting fair trade laws, ending subsidies to large agribusinesses in the United States, tackling the causes and consequences of climate change, and supporting community-led attempts to organically and sustainably grow food, Obama could begin to make a positive contribution to U.S. Africa policy. In its current state, FTF may be more of a boon to companies like Monsanto than to Africans facing the realities of hunger and poverty.

Beth TuckeyBeth Tuckey is currently an executive associate at Africa Action in Washington, DC and a contributor to Foreign Policy In Focus.