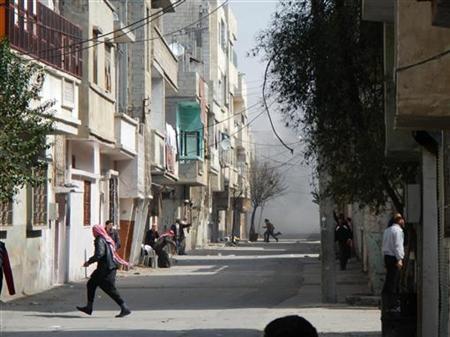 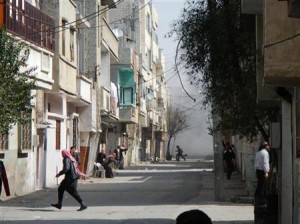 Almost 18 months after the onset of popular democratic protests, the Syrian revolution increasingly resembles a bloody marathon with no clear finish line on the horizon. Unlike the “lightning” revolutions in Tunisia and Egypt, where strongmen were overthrown in a matter of weeks, the Syrian uprising has instead entailed a slow-motion disintegration of the rich tapestry that has characterized Syrian society for centuries.

There is no way to understate the depth of the unfolding tragedy: An estimated 20,000 civilians have been killed, some 2.5 million are internally displaced, and more than 250,000 have risked life and limb to flee the country just to arrive at cramped refugee camps in Turkey, Jordan, and Iraq.

As the armed revolution enters the two large cities of Aleppo and Damascus, the humanitarian crisis is set to deepen unless all relevant parties—domestic and international—commit themselves to a peaceful and effective political solution. Thus, the first priority should be the imposition of a UN-administered ceasefire to end the bloodshed and provide necessary space for a genuine political dialogue. There must also be an immediate end to the ongoing proxy war that is fueling an arms race inside the country, with Western and Arab powers (directly or indirectly) arming rebels and extremist elements to topple the regime through sheer violence and terror.

A State of War

What initially began as a non-violent demand for political liberalization and social justice has gradually morphed into a large-scale sectarian conflict, placing varying ethnic and religious groups on a collision course.

Notwithstanding the almost universal demand for democracy among the Syrian population, what we are witnessing is the frightening possibility of a Sunni-dominated opposition—spearheaded by a less-than-moderate Muslim Brotherhood and buttressed by the inflow of armed extremists—waging an all-out war on not only the minority Alawite sect that has stood by President Assad and his regime, but also other minority groups, such as the Christians and Shiites, perceived to be invested in the Baath party.

The Syrian uprisings—similar to those in Egypt and Tunisia—were largely founded upon secular principles of tolerance, justice, and democracy. Yet we are inching closer to the possible emergence of a post-Assad state in which reactionary and radical elements could implement an even less tolerant political system underpinned by undemocratic “majoritarian rule,” ultra-conservative values, and—most ominously—the purging of all remnants of the ancien regime.

As Assad’s forces struggle to hold on to their traditional strongholds in Aleppo and Damascus, the Alawite community—fearing a meltdown in the capital—is already fortifying its positions in the northwestern mountainous regions as well as the coastal cities of Latakia and Tartus (incidentally, the site of numerous visits by Russian and Iranian naval forces). Ultimately, if the regime loses control over the capital, it might choose to withdraw to these areas and create a separate enclave defended by its massive stockpile of WMDs and advanced armaments.

The Kurds, meanwhile, have chosen to stay out of the revolution and extend their networks of cooperation with their Kurdish brethren in Iraq (and possibly in Turkey too), while consolidating their de facto jurisdiction over the oil-rich northeastern regions bordering Turkey and Iraq.

The regime has already lost its political hegemony in much of the countryside, with self-governing revolutionary councils filling in the political vacuum. Meanwhile, rebel groups are expanding and strengthening their operations, denying the regime much-needed mobility and tactical space. They have already been busy blocking the highly strategic Latakia-Aleppo highway to choke off Assad’s forces—forcing the regime to increasingly rely on its air force.

Central cities such as Hama and Homs, traditional hotbeds of anti-Assad sentiment, are anything but under the control of the state, forcing the regime to occasionally resort to artillery shelling, helicopter gunship attacks, and carpet bombardments to exert a semblance of control.

In essence, what one increasingly observes in much of the country are self-governing communities intermittently rocked by massacres and hit-and-run operations—by both the regime and the armed opposition.

With both the opposition and the regime locked in a state of war, the only way to end the bloodshed is for the international community to come to its senses and forge a unified and effective response under the auspices of the UN.

But there is hardly an “international community” to speak of as far as Syria is concerned. There are basically three camps on this conflict.

The first camp is composed of anti-Assad hawks, mainly NATO countries and Sunni powers like Saudi Arabia, which are determined to dislodge the regime in Damascus and checkmate their main regional adversary, Iran. The Assad regime is the strategic node that has allowed Iran to project its influence beyond the immediate Sunni-dominated Persian Gulf neighborhood, establishing the so-called “Shia Crescent” from eastern Afghanistan to the eastern Mediterranean—much to the dismay of Washington and the Sunni powers. Syria is simply their best chance to cripple the core of Iran’s regional network.

Increasingly reducing the Syrian crisis to a simple Shia-Sunni divide, these powers have been among the most vociferous proponents of military intervention, ranging from the imposition of a no-fly zone to the creation of “humanitarian buffer zones” along the Turkish-Syrian border, or even the implementation of a “no-drive zone” to neutralize Assad’s military maneuvering. Some, such as the Qataris, have even floated the idea of placing boots on the ground, with Arab soldiers—together with NATO operational support—implementing peace enforcement or regime change. So far, it seems that the consensus within this camp is to focus on arming the rebels and increasing sanctions and diplomatic pressure to cripple the regime.

The second camp is composed of Eastern powers and Syrian allies such as Russia, China, and Iran. They have been the most vociferous opponents of any form of military intervention in Syria, emphasizing the need for a “managed political transition” without an explicit call for Assad to step down. Russia and Iran have actively supported the regime by providing it diplomatic, political, and financial space. While the Russians have continued to supply the regime with armaments (ostensibly based on prior contracts), the Iranians are said to have played an increasingly prominent role as a source of financial and logistical support. However, none of these powers has ruled out dialogue with the opposition, with each of them either hosting (or expressing an intent to meet with) elements of the opposition to mediate a prospective political compromise with the regime.

The last camp, or the “third way,” is composed of developing countries, from India to Brazil, that are deeply disturbed by the ongoing violence in Syria. They may have already lost their belief in the legitimacy of President Assad, but they are also equally critical of any form of military intervention to resolve the crisis. Their main priority is to kick-start a UN-sponsored political approach, which will combine humanitarian, political, and peacekeeping tools to put a lid on the ongoing violence in Syria and pave the way for a managed political transition.

Toward a Diplomatic Resolution

Among the most prominent in the third camp is Egyptian President Mohamed Morsi, who has emphasized the need for a regional Syrian Contact Group composed of all relevant regional powers—including Iran, the external actor that wields the largest leverage over Assad—to build an effective framework for a political resolution of the crisis. The framework would be backed by a UN mediation led by the veteran Algerian diplomat Lakhdar Brahimi. Morsi’s proposal has been endorsed by both Russia and Iran.

During the recent Non-Aligned Movement (NAM) Summit—which brought about 120 countries, 17 observer nations, and around 30 heads of state to Tehran—the Iranians also proposed the formation of a special NAM committee under the leadership of the organization’s past, current, and future chairs: Iran, Egypt, and Venezuela. This could serve as an institutional bedrock for a coordinated regional and international approach as proposed by Morsi. The key element here is the emphasis on political dialogue, compromise, and pressure on both sides of the conflict to end the ongoing cycle of violence. Of course, it remains to be seen whether Washington, Riyadh, or Ankara will ever agree to such arrangement.

In a recent visit to Moscow, Syrian Deputy Prime Minister Qadri Jamil hinted at the regime’s openness to negotiating Assad’s resignation. This is a potential turning point in favor of a political compromise, but it opens the way for new and wrenching questions. Should Assad be given political asylum? Could guarantees against persecution facilitate the end of violence and kick-start a process of democratic transition? Given the need to put an immediate end to the cycle of violence, we may see growing discussions on sacrificing some measure of justice for the sake of instituting peace before it is too late.

Walden Bello, Richard Javad HeydarianRichard Javad Heydarian is a Middle East expert who has contributed to or been quoted in the Asia Times, Foreign Policy, The Diplomat, United Press International, Tehran Times, Epoch Times, and Russia Today (RT), among many other publications. FPIF columnist Walden Bello is a member of the Philippines House of Representatives and a senior fellow at Focus on the Global South.