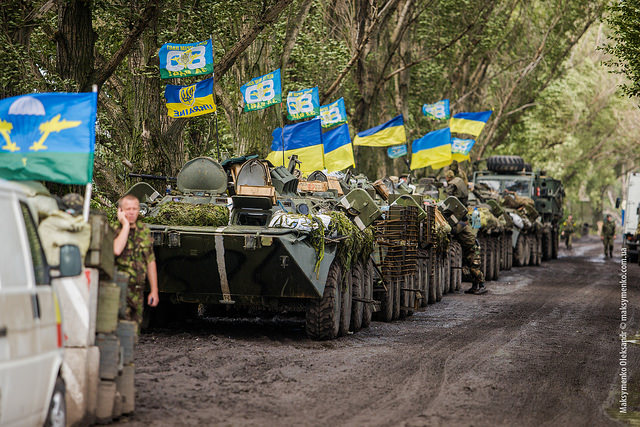 Stephen Walt Ventures Into the Taboo, Calls for Appeasement in Ukraine

According to Stephen Walt, insecurity, not the urge to expand, is behind Russia’s actions in Ukraine.
By Russ Wellen | February 11, 2015

As if arming Islamist extremist rebels wasn’t bad enough, now some are urging the United States to arm Ukraine. In Foreign Policy magazine, Stephen Walt writes about a task force of NATO-friendly diplomats and foreign-policy experts established by three tanks that “wants the United States to send Ukraine $1 billion in military assistance as soon as possible, with more to come.”

These, he explains, “are the same people who have been telling us since the late 1990s that expanding NATO eastwards posed no threat to Russia and would instead create a vast and enduring zone of peace in Europe.” Even though “open-ended NATO expansion has done more to poison relations with Russia than any other single Western policy. … these experts are now doubling down to defend a policy that was questionable from the beginning and clearly taken much too far.”

How better to engage with Russia over Ukraine? In his reply, Walt ventures into the taboo (see where italicized).

When insecurity is the taproot of a state’s revisionist actions, making threats …… will heighten its paranoia and fuel its defensive reactions. … When the “spiral model” applies [as Walt explains it, when a state’s seemingly aggressive policy is motivated primarily by fear or insecurity], the proper response is a diplomatic process of accommodation and appeasement (yes, appeasement) to allay the insecure state’s concerns. Such efforts do not require giving an opponent everything it might want or removing every one of its worries, but it does require a serious effort to address the insecurities that are motivating the other side’s objectionable behavior.

Walt elaborates on why appeasement (there, I said it, too) might be the best strategy.

Russia is not an ambitious rising power like Nazi Germany or contemporary China; it is an aging, depopulating, and declining great power trying to cling to whatever international influence it still possesses and preserve a modest sphere of influence near its borders, so that stronger states — and especially the United States — cannot take advantage of its growing vulnerabilities.

In other words, not to be condescending, but Russia needs to feel better about itself. Furthermore:

Ukraine’s fate is much more important to Moscow than it is to us, which means that Putin and Russia will be willing to pay a bigger price to achieve their aims than we will. The balance of resolve as well as the local balance of power strongly favors Moscow in this conflict. Before starting down an escalatory path, therefore, Americans should ask themselves just how far they are willing to go.

As the world slowly slides towards the war in Ukraine, a war which will inevitably, like in a Greek drama, become, in a year or two, a nuclear and possibly a World War, one has to ask himself or herself how and why this has all happened.

Isn’t it past time to start talking in detail about the likely consequences of a war with Russia, that is, a nuclear war?

None other than Mikhail Gorbachev said of the situation:

Such a war today would probably lead inevitably to nuclear war. But the statements and propaganda on both sides make me fear the worst

Back in April of last year, for Forbes, Loren Thompson provided us with Four Ways The Ukraine Crisis Could Escalate To Use Of Nuclear Weapons.

When you consider all the processes working to degrade restraint in wartime — poor intelligence, garbled communication, battlefield setbacks, command attenuation, and a host of other influences — it seems reasonable to consider that a military confrontation between NATO and Russia might in some manner escalate out of control, even to the point of using nuclear weapons.

You can almost hear Ravel’s Bolero in the background, on its slow march to its crescendo.