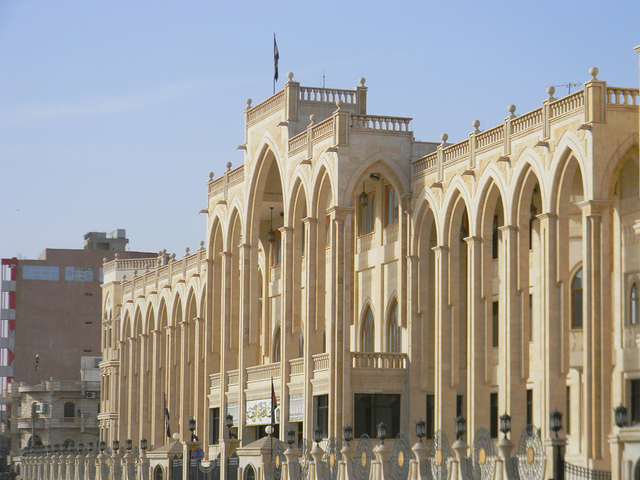 Not only has the Islamic State been driven out of Ramadi, but most of its citizens. Pictured: Government building in Ramadi. (Photo: Beshr / Flickr Commons)

The United States committed to establishing a base in Iraq’s Anbar province this week and sending 400 American troops to train Iraq’s poor excuse of an army in order to re-take Ramadi back from the Islamic State. The Iraqi military that should have been, or at least its leadership (given its walking papers by the infamous Paul Bremer), has emerged as the spearhead of the Islamic State’s forces.

In addition, the Pentagon announced Thursday that since August 2014 the United States has spent over $2.7 billion (or $9 million per day) fighting the Islamic State.

On a twin track, reports Jacob Siegel at the Daily Beast:

… Tehran has also dispatched the Quds Force [of Iran’s Revolutionary Guard] to guide or even direct military efforts in Syria. [Commander Qasem] Suleimani has personally overseen the creation of Assad’s National Defense Force, a Basiji-like super-militia designed to shore up the regime against an increasingly powerful, Sunni-led insurgency.

As well as in Syria, Suleimani

… has acted as the actual general and architect of Iraq’s ground war against ISIS, using a similar approach, embedding Iranian “advisers” into the structures of the Iraqi Security Forces and Hashd al-Shaabi, the umbrella organization for a host of Shia militias. He has coordinated offensives against ISIS from a rumored command center well within Baghdad’s Green Zone, often with the help of American-led airpower.

Though God forbid that ever the twain — the United States and Iran — should ever meet. But Suleimani hasn’t had any more success than the United States, Iraq, or Syria. Which leads us to, as Stephen Walt asks at Foreign Policy, What Should We Do if the Islamic State Wins?

His short answer? Live with it (as the article’s subhead reads). Wait, what about the running humanitarian nightmare that is the Islamic State? Let’s hear Professor Walt out first.

To begin with, he’s not referring to “a caliphate from Baghdad to Rabat and beyond.” He means holding on to what it’s got. Walt writes that “the question is: What do we do if the Islamic State becomes a real state and demonstrates real staying power?” Which “is looking more likely these days, given Baghdad’s inability to mount a successful counteroffensive.” And also because

…only a large-scale foreign intervention is likely to roll back and ultimately eliminate the Islamic State [which is not about to] happen unless a coalition of Arab states agrees to commit thousands of their own troops to the battle, because the United States will not and should not do the fighting for states whose stake in the outcome exceeds its own.

Walt echoes some others in proposing a policy of containment. He seems to think the Islamic State has reached its apex.

… the Islamic State is not, in fact, a powerful global actor. Its message attracts recruits among marginalized youth in other countries, but attracting perhaps 25,000 ill-trained followers from a global population of more than 7 billion is not that significant. … More importantly, the relative handful of foreigners flocking to fight under the Islamic State’s banner are only a tiny fraction of the world’s Muslims, and the fanatical jihadi message shows little sign of winning significant support in this large and diverse population.

But this is kind of queasy-making.

It may even be a net gain if these people leave their countries of origin and then get to experience the harsh realities of jihadi rule. Some of them will realize that the Islamic State is brutal and unjust and a recipe for disaster; the rest will be isolated and contained in one spot instead of stirring up trouble at home.

The last clause seems to suggest that if the Islamic State must commit atrocities let it do so on the citizens of its own territory rather than Europe, North Africa, or Iraq. As upsetting as that is, note also that the Islamic State has sunk its roots into part of Iraq, one of their “countries of origin,” but Iraq’s citizens living in Islamic State still suffer under Walt’s scenario. He addresses my concern.

I’m not being naive. Islamic State fellow travelers will no doubt conduct terrorist acts and cause other forms of trouble in various places. But that is a far cry from the Islamic State’s being able to spread willy-nilly across the Islamic world.

Assume the Islamic State is contained but not overthrown and that it eventually creates durable governing institutions. … Should this continue, how long will it be before other countries begin to recognize the “Islamic State” as a legitimate government?

This might sound preposterous, but remember that the international community has often tried to ostracize revolutionary movements, only to grudgingly recognize them once their staying power was proven.

Walt then briefly chronicles the depredations of not only the Russian communists and Maoists, but the British in conquering much of the world and the United States in subjugating Native Americans. He reminds us that “movements that were once beyond the pale sometimes end up accepted and legitimized, if they manage to hang onto power long enough.” They learn to moderate their terrorist ways. His prescription:

The chief task for American statecraft, therefore, should be to coordinate and back up an international campaign of containment in which local actors such as Saudi Arabia, Jordan, Turkey, and Iran — which have the most at stake — take the lead role. It also means helping others counter the Islamic State’s efforts to spread its message, convincing other states to do more to limit its sources of revenue, and patiently waiting for its excesses to undermine it from within.

Maybe we can be patient, but it’s obviously unfair to ask those currently suffering under the Islamic State’s rule to be patient. Especially when its brutality extends to, as reported by Reuters in February

Islamic State militants are selling abducted Iraqi children at markets as sex slaves, and killing other youth, including by crucifixion or burying them alive, a United Nations watchdog said on Wednesday.

Iraqi boys aged under 18 are increasingly being used by the militant group as suicide bombers, bomb makers, informants or human shields to protect facilities against U.S.-led air strikes, the U.N. Committee on the Rights of the Child said.

As you can see, the Islamic State’s very brutality can be used as an argument against those U.S.-led airstrikes.