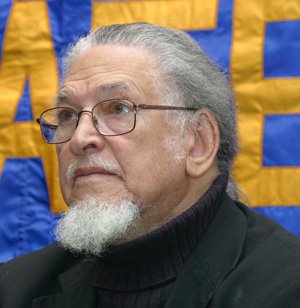 For poet Dennis Brutus, at 80. Martín Espada will be a featured poet at the 2010 Split This Rock poetry festival.

The office workers did not know, plodding through 1963
and Marshall Square station in Johannesburg,
that you would dart down the street between them,
thinking the police would never fire into the crowd.
Sargeant Kleingeld did not know, as you escaped
his fumbling hands and the pistol on his hip,
that he would one day be a footnote in the book of your life.

The secret policeman on the corner did not know,
drilling a bullet in your back, that today the slug
would belong in a glass case at the museum of apartheid.
The bystanders did not know, as they watched
the coloured man writhing red on the ground,
that their shoes would skid in blood for years.

The ambulance men did not know,
when they folded the stretcher and refused you a ride
to the white hospital, that they would sit eternally
in Hell’s emergency room, boiling with a disease
that darkens their skin and leaves them screaming for soap.

The guards at Robben Island did not know,
when you hammered stone to gravel with Mandela,
that the South Africa of their fathers
would be stone hammered to gravel by the inmates,
who daydreamed a republic of the ballot
but could not urinate without a guard’s permission.

Did you know?
When the bullet exploded the stars
in the cosmos of your body, did you know
that others would read manifestos by your light?
Did you know, after the white ambulance left,
before the coloured ambulance arrived, if you would live at all,
that you would banish the apartheid of the ambulance
with Mandela and a million demonstrators dancing at every funeral?
Did you know, slamming the hammer into the rock’s stoic face,
that a police state is nothing but a boulder
waiting for the alchemy of dust?
Did you know that, forty years later,
college presidents and professors of English
would raise their wine to your name
and wonder what poetry they could write
with a bullet in the back?

What do the people we call prophets know?
Can they conjure the world forty years from now?
Can the poets part the clouds for a vision in the sky
easily as sweeping curtains across the stage?

A beard is not the mark of prophecy
but the history of a man’s face.
No angel shoved you into the crowd;
you ran because the blood racing to your heart
warned a prison grave would swallow you.
No oracle spread a banquet of vindication before you
in visions; you mailed your banned poems
cloaked as letters to your sister-in-law
because the silence of the world
was a storm roaring in your ears.

Martin Espada, Melissa TuckeyMartín Espada has published 17 books in all as a poet, editor and translator. His collection of poems entitled The Republic of Poetry (Norton, 2006) received a Paterson Award for Sustained  Literary Achievement and was a finalist for the Pulitzer Prize. He has received numerous fellowships and awards, including a Guggenheim Fellowship. Espada teaches at the University of  Massachusetts-Amherst and is a contributor to Foreign Policy In Focus.