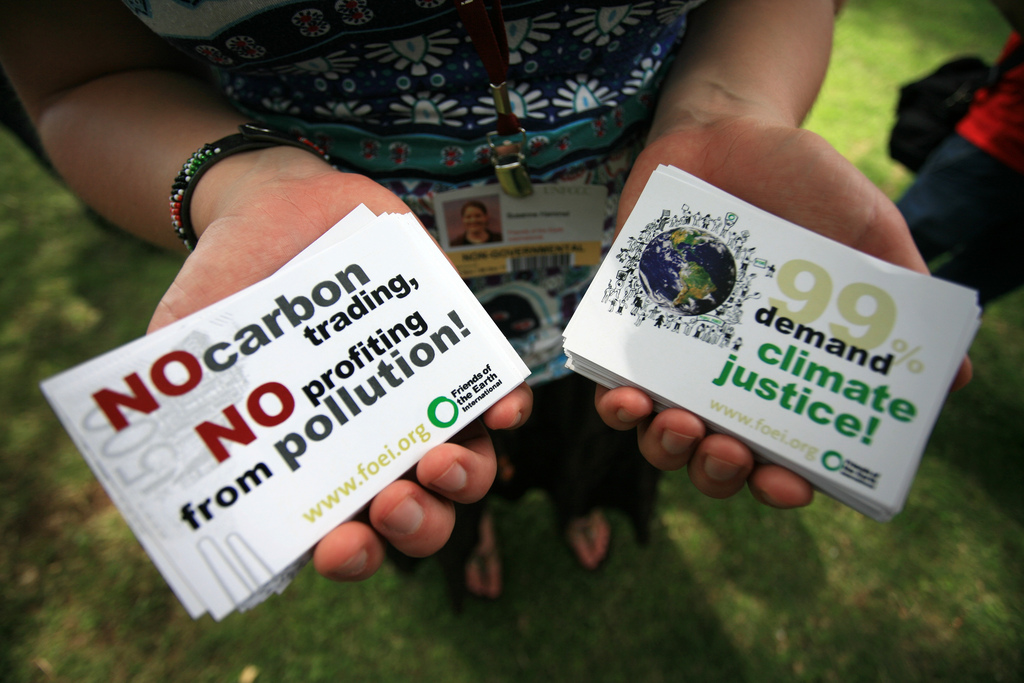 If the UN wants to help developing countries make the leap to renewable energy, it should take a lesson from divestment activists all over the world and keep its checkbook closed to dirty energy projects. (Photo: Friends of the Earth International / Flickr)

Climate disruption is inextricably linked to economic inequality. Serious climate solutions must be, too.
By Jorge Villarreal | August 9, 2016

This year’s Democratic platform has the fingerprints of progressive movements all over it. A $15 minimum wage, a pathway to cannabis legalization, improvements to Social Security, police accountability, and financial reforms — including a tax on speculation — all make an appearance.

The platform also highlights the critical link between climate and the economy. In particular, it argues that “carbon dioxide, methane, and other greenhouse gases should be priced to reflect their negative externalities.”

That’s a complicated way of saying that the cost of the harm done to people and the planet should be calculated into the price of energy generated by burning coal, oil, and gas. If these costs were factored into the price consumers pay at the pump or in their utility bills, it could make dirty energy expensive enough to change both consumer and industry behavior. And that, in turn, would make renewable energy much more cost-competitive.

It could also — potentially — raise a lot of money.

Boulder, Colorado, is a case in point. The city made history in 2006 by enacting the country’s first municipal-level carbon tax. Voters reauthorized it by a landslide in 2012 — in part, no doubt, due to an annual revenue haul of nearly $2 million. Jurisdictions in Maryland and California have since followed suit and set up their own municipal carbon pricing mechanisms.

But a clean energy economy catalyzed by a carbon tax is only a progressive victory if it’s also a just economy. That means the policies to fight climate change also have to help end inequality. Why? Because the two are inextricably linked.

Sure, wealthy people may be in a better position to buy an electric car, cover their roofs in solar panels, and pay a premium for energy-saving appliances. But studies, including one by economists Thomas Piketty and Lucas Chancel, show that the rich are actually super-polluters. In the United States, the top 1 percent of income earners have an average carbon footprint two orders of magnitude bigger than someone in the bottom 10 percent of income earners.

A carbon tax could help transfer wealth from people at the carbon-intensive top to less polluting middle and lower-income households, and ensure the costs of addressing climate change are distributed equitably. But it this won’t happen automatically. It will take thoughtful and inclusive policy design and implementation.

Lifting Up the Bottom

Like sales taxes and all other standalone consumption taxes, a carbon tax is, by nature, regressive. This means that people further down the economic ladder will have more difficulty paying them than their wealthier counterparts.

Low-income households spend, on average, 7.2 percent of their income on electricity and fuel — far more than higher income families, which pay about 2.3 percent. Simply put, any tax that increases the price of fossil fuels would hit lower-income families harder than their affluent counterparts, because a bigger portion of their income would be subject to it.

Luckily, there are tools to help structure a tax to redistribute revenue from wealthier households to everyone else.

A measure slated for Washington State’s ballot this fall shows one way. The policy directs revenue which would be generated from a carbon tax to fund a state Earned Income Tax Credit worth up to $1,500 per year. It would deliver tax relief to nearly 400,000 low-income households while also cutting the state’s regressive sales tax.

Similarly, a national carbon pricing scheme in the form of a cap-and-trade bill that was proposed in the United States in 2009 but never enacted called for an “energy refund program.” The program would have provided a refundable tax credit to workers and payments to retirees, people with disabilities, and veterans. It would have also redistributed some revenue to low-income households by way of the electronic benefit transfer (EBT) system used to distribute food stamp benefits.

What revenue isn’t directly returned via these mechanisms could be used to fund clean power infrastructure projects for marginalized communities, or programs to mitigate the health impacts of fossil fuel pollution and the effects of climate change. Some ideas being floated include financial incentives for community solar, subsidized rooftop solar systems, and energy efficiency upgrades for low-income homeowners.

As useful as a carbon tax could be, it’s by no means a silver bullet. A truly effective climate plan must incorporate other strategies for lifting up people at the bottom of the income ladder.

Chile’s carbon tax, for example, was adopted in conjunction with an increase in the nation’s corporate income tax. Unlike the carbon tax in Washington State (which plans to phase out taxes on manufacturing) or a carbon trading scheme in British Columbia (which cuts corporate taxes), Chile’s tax was specifically designed not to be revenue neutral.

Instead, the money raised there will be reinvested in education and modernizing the nation’s electric grid to bring renewable energy online. As part of the policy package, taxes and regulations have been put in place to curb air pollutants from power plants like nitrogen oxides and sulfur as well.

Finally, a carbon tax should be part of broader transformative shift. It isn’t enough to merely put a price on emissions and charge it to consumers. The broader goal is to change the way we live, work, play, and think about burning fossil fuels.

Research suggests that Ireland’s carbon tax, for instance, has encouraged more individuals to recycle regularly and to shift to greener transportation methods even as fuel and electricity prices rise. Norway, which has one of the highest carbon taxes in the world, has turned to seemingly unconventional methods to rethink their approach to climate action. This includes ambitious plans to phase out gasoline-powered automobiles and eventually phase out all automobiles in urban centers — basically altering the construct of the city itself.

A successful approach to climate change would be one in which taxpayers eventually accept the true costs of dirty energy, and actively demand and work towards a cleaner future. Though by no means a silver bullet, a truly climate justice-driven carbon pricing scheme should be part of the equation.

Jorge Villarreal is a Next Leader at the Institute for Policy Studies.