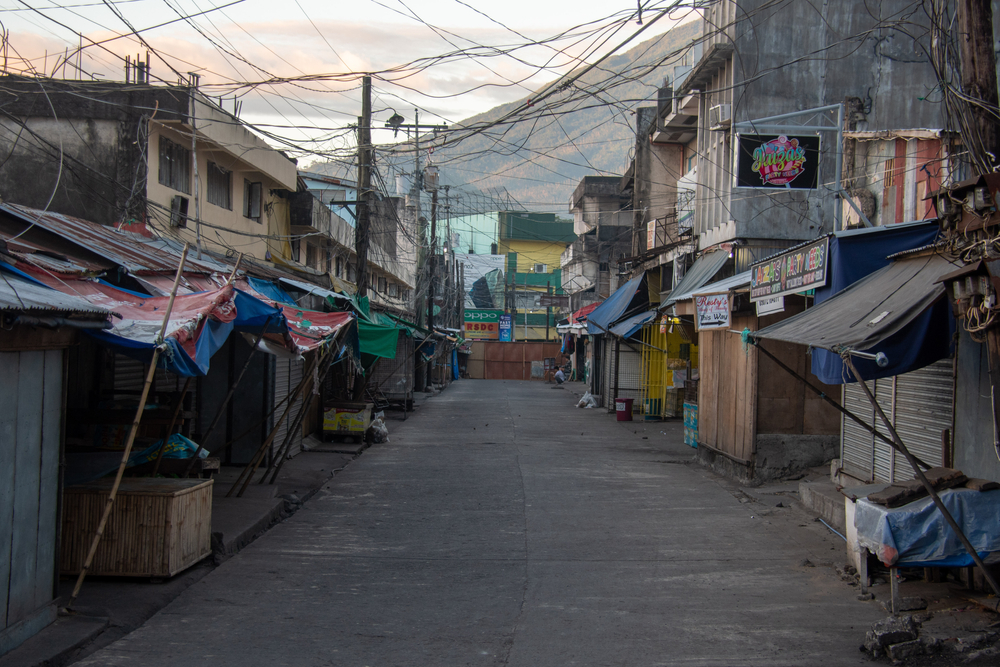 A street under quarantine in Iriga City, Philippines (Shutterstock)

Stop the $2 Billion Arms Sale to the Philippines

Philippine strongman Rodrigo Duterte is using the pandemic to crush his opposition — and the U.S. is poised to arm him to the teeth.
By Amee Chew | May 15, 2020

Following this announcement, a 30-day window for Congress to review and voice opposition to the sale commenced. It is imperative that we stop this avalanche of military aid for Philippine President Rodrigo Duterte’s regime.

Duterte’s human rights record is atrocious. If the arms sale goes through, it will escalate a worsening crackdown on human rights defenders and on dissent — while fomenting an ongoing bloodbath. Duterte is infamous for launching a “War on Drugs” that, since 2016, has claimed the lives of as many as 27,000 souls, mostly low-income people summarily executed by police and vigilantes.

In Duterte’s first three years of office, nearly 300 journalists, human rights lawyers, environmentalists, peasant leaders, trade unionists, and human rights defenders were assassinated. The Philippines has been ranked the deadliest country for environmentalists in the world, after Brazil. Many of these slayings are linked to military personnel.

Now, Duterte is using COVID-19 as a pretext for further militarization and repression, despite the dire consequences for public health.

Around the world, and particularly for the U.S., the COVID-19 pandemic has brought to the fore the contradiction between military capacity and human well-being. This arms deal is yet another example of the U.S. government’s gross misallocation of resources towards war profiteering and militarization, rather than health services and human needs. The Pentagon’s bloated budget of trillions has done nothing to protect us from a public health catastrophe, and has failed to create true security.

Only a complete realignment of federal priorities away from militarization, here and abroad, and towards strengthening infrastructures of care will.

The COVID-19 pandemic has served as a pretext for Duterte to impose military checkpoints, mass arrests, and de facto martial law throughout the Philippines.

As of late April, over 120,000 people have been cited for quarantine violations, and over 30,000 arrested — despite the severe overcrowding in Philippine jails, already exacerbated by the drug war. “Stay at home” orders are ruthlessly enforced by the police, even as in many urban poor communities, people live hand-to-mouth.

Without daily earnings, millions are desperate for food. By late April, a majority of indigent households had still not received any government relief. A thousand residents in Pasay were forced into homelessness when their informal settlement was destroyed in the name of slum clearance at the beginning of the lockdown, even as the homeless are arrested and thrown in jail.

Duterte has placed the military in charge of COVID-19 response. On April 1, he ordered troops to “shoot dead” quarantine violators, causing human rights abuses to immediately surge. The next day, a farmer, Junie Dugog Piñar, was shot and killed by police for violating the COVID-19 lockdown in Agusan del Norte, Mindanao.

Police have locked curfew violators in dog cages, used torture and sexual humiliation as punishment against LGBTQ people, and beaten and arrested urban poor people protesting for food. Beatings and killings to enforce “enhanced community quarantine” continue. Meanwhile, a teacher was arrested simply for posting “provoking” comments on social media that decried the lack of government relief, while a filmmaker was detained two nights without a warrant for a sarcastic post on COVID-19.

Cure Covid, a network of volunteers across myriad organizations in the greater Metro Manila region, has organized relief packs and community kitchens for thousands, while engaging in community organizing to strengthen mutual aid. Movement organizers are calling for mass testing, basic services, and an end to the militarized COVID-19 response.

KADAMAY is a mass-based organization of 200,000 urban poor people across the Philippines that has been at the forefront of resisting Duterte’s drug war and reclaiming vacant housing for homeless people. In 2017, KADAMAY led 12,000 homeless people in occupying 6,000 vacant homes that had been set aside for the police and military in Pandi, Bulacan. Despite repression and intimidation, #OccupyBulacan continues to this day.

With COVID-19, KADAMAY has led mutual aid efforts and #ProtestFromHome pot-banging actions, with video disseminated on social media, to demand relief and health services, not militarization. In immediate reprisal for voicing dissent after one pot-banging, the national spokesperson of KADAMAY, Mimi Doringo, was threatened with arrest. In Bulacan, a community leader was taken to a military encampment and told to cease all political activity and “surrender” to the government or he would get no relief aid.

Efforts at mutual aid are being criminalized and targeted for repression. Since late April, police have carried out mass arrests of relief volunteers, alongside street vendors and those seeking food. On April 19, seven relief volunteers from Sagip Kanayunan were detained while on their way to distribute food in Bulacan, and later charged with inciting “sedition.” On April 24, 50 urban poor residents in Quezon City, including a relief volunteer, were detained for not carrying quarantine passes or wearing face masks. On May 1, ten volunteers conducting relief with the women’s organization GABRIELA were arrested while conducting a community feeding in Marikina City.

This targeting is no accident. Since 2018, an executive order by Duterte has authorized a “whole-of-nation approach” to counter-insurgency, through a broad array of government agencies, resulting in increased repression against community organizers and human rights defenders generally.

The crackdowns against mutual aid and survival have prompted campaigns on social media to “stop criminalizing care and community.” Save San Roque, a network supporting the resistance of urban poor residents against demolition, has started a petition to immediately release relief volunteers and all low-level quarantine violators. Human rights organizations are also petitioning for the release of political prisoners, many of them low-income farmers, trade unionists, and human rights defenders facing trumped up charges, including the elderly and ill.

As a direct result of the government response focused on militarization, rather than adequate health care, food, and services, the Philippines has among the highest number of COVID-19 cases in Southeast Asia, and the pandemic is quickly worsening.

Today’s U.S.-Philippine military alliance has its roots in the U.S. colonization and occupation of the Philippines over a hundred years ago.

Despite granting the Philippines independence in 1946, the U.S. has used unequal trade agreements and its military presence to maintain the Philippines’ neocolonial status ever since. For decades, propping up oligarchic rulers and preventing land reform guaranteed the U.S. cheap agricultural exports. The U.S. military assisted with countering a string of continual rebellions.

The U.S. military itself maintains a troop presence in the Philippines through its Operation Pacific Eagle and other exercises.

In the name of “counterterrorism,” U.S. military aid is helping Duterte wage war on Philippine soil and repress civilian dissent. Since 2017, Duterte has imposed martial law on Mindanao, where he has repeatedly dropped bombs. Military attacks have displaced over 450,000 civilians.

Carried out with U.S. backing and even joint activities, Duterte’s military operations are shoring up the corporate land-grabbing of indigenous lands and massacres of farmers organizing for their land rights. Paramilitaries backed by the armed forces are terrorizing indigenous communities, targeting schools and teachers.

In February, prior to the announced arms deal, Duterte nominally rescinded the U.S.-Philippines Visiting Forces Agreement (VFA), which allows U.S. troops to be stationed in the Philippines for “joint exercises.” On the surface, this was in response to the U.S. denying a visa to former drug war police chief Ronald “Bato” Dela Rosa. However, Duterte’s revocation of the VFA is not immediately effective, and only begins a 6-month process of renegotiation.

The proposed arms sale signals that Trump intends to strengthen his military backing for Duterte. The Pentagon seeks to maintain a close military “partnership.”

A growing international movement, in solidarity with indigenous and Filipino communities, is calling for an end to military aid to the Philippines. U.S. direct military aid to Duterte’s regime totaled over $193.5 million in 2018, not counting pre-allocated amounts and donated weapons of unreported worth. Military aid also consists of grants to purchase arms, usually from U.S. contractors.

Relatedly, the U.S. government regulates the flow of private arms sales abroad — such as the current proposed sale. Sales brokered by the U.S. government are often a public subsidy to private contractors, using our U.S. tax dollars to complete the purchase. Congress must use its power to cut the pending sale off.

The latest proposed $2 billion arms sale includes 12 attack helicopters, hundreds of missiles and warheads, guidance and detection systems, machine guns, and over 80,000 rounds of ammunition. The State Department says these, too, would be used for “counterterrorism” — i.e., repression in the Philippines. Due to lack of transparency and Duterte’s deliberate efforts to obscure aid flows, U.S. military aid may well end up providing ammunition to the armed forces waging Duterte’s drug war, to vigilantes, or to paramilitaries, all without public scrutiny.

Duterte is using the pandemic as a pretext to continue crushing political opposition. He has now assumed special emergency powers. Even prior to the pandemic, in October 2019, police and military raided the offices of GABRIELA, opposition party Bayan Muna, and the National Federation of Sugar Workers, arresting over 57 people in Bacolod City and Metro Manila in one sweep.

On April 30, after weeks of police intimidation for conducting feeding programs, Jory Porquia, a founding member of Bayan Muna, was assassinated inside his home in Iloilo. Over 76 protesters and relief workers were illegally arrested on May Day, including four youth feeding program volunteers in Quezon City, four residents who posted online photos of their “protesting from home” in Valenzuela, two unionists holding placards in Rizal, and 42 people conducting a vigil for slain human rights defender Porquia in Iloilo. Sixteen workers in a Coca-Cola factory in Laguna were abducted and forced by the military to “surrender” posing as armed insurgents.

The U.S.’s war machine profits its private contractors at our expense. Before the COVID-19 pandemic, Boeing relied on the Pentagon for a third of its income. In April, Boeing received a bailout of $882 million to restart a paused Air Force contract — for refueling aircraft that are in fact, defective. But for-profit weapons manufacturers and other war profiteers should have no place steering our foreign policy.

Congress has the power to dissent but must act swiftly. Rep. Ilhan Omar has introduced a bill to stop arming human rights abusers such as Duterte. This month, the International Coalition for Human Rights in the Philippines, Communications Workers of America, and others, will launch a bill specifically to end military aid to the Philippines. In the meantime, we must urge Congress to stop the proposed arms sales to the Philippines: please sign this petition to do so.

The COVID-19 pandemic is baring the need for global solidarity against militarization and austerity. In taking up the fight against the deep footprint of U.S. imperialism, here and abroad, our movements will make each other stronger.

Amee Chew has a Ph.D. in American Studies & Ethnicity, and is a Mellon-ACLS Public Fellow.