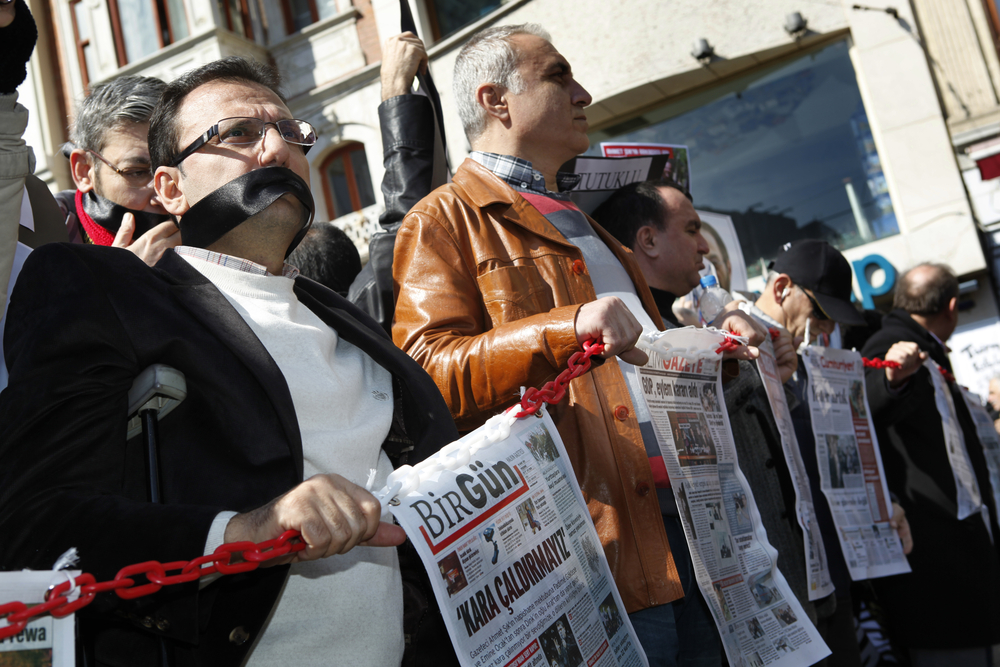 The latest attacks on journalists and news organizations by corrupt populists are contributing to a global rollback of fundamental rights.
By John Feffer | October 12, 2016

Imagine that Donald Trump wins the presidency. Then, as he has done throughout his career, he goes after his enemies. He purges the Republican Party of everyone who refused to support him. He initiates criminal proceedings against Hillary Clinton.

And he shuts down The New York Times and The Washington Post.

It sounds like an unlikely scenario. Even if he does somehow manage to pull his campaign out of hospice to win in November, Trump wouldn’t be able to just close the leading newspapers in the United States, however much he might despise the liberal media.

But that’s exactly what’s happening elsewhere in the world. In Hungary, Viktor Orban’s government this week pulled some strings behind the scenes that led to the shuttering of the leading daily newspaper, Nepszabadsag. Earlier this year, the government of Recep Tayyip Erdogan closed one of the top Turkish papers, Zaman. In Russia back in 2008, someone — perhaps a 400-pound guy sitting on his bed — pulled the plug on Moskowski Korrespondent after it reported on an affair between Russian President Vladimir Putin and a 24-year-old gymnast.

Welcome to the brave new world of censorship. Today’s illiberal democrats pretend to respect press freedom. But they don’t tolerate any criticism that threatens their political and economic position. They’ll throw individual journalists in jail. But they’re also not above muzzling an entire paper. At a time when corporate pressures threaten press diversity and reporters in many countries risk their lives to pursue leads, the latest attacks on the media by corrupt populists are contributing to a global rollback of fundamental rights.

Every year Reporters Without Borders puts out a survey of press freedom. Its 2016 report, issued in April, was the grimmest yet. Last year showed nearly a 4 percent decline in freedom of the press globally, according to their metric, and a 13 percent deterioration since 2013.

The many reasons for this decline in freedom of information include the increasingly authoritarian tendencies of governments in countries such as Turkey and Egypt, tighter government control of state-owned media, even in some European countries such as Poland, and security situations that have become more and more fraught, in Libya and Burundi, for example, or that are completely disastrous, as in Yemen.

One key statistic for measuring press freedom is the number of journalists in jail, which dropped very modestly last year (from 221 in 2014 to 199 in 2015). But 2016 looks as though it will easily exceed the record. Turkey alone has 120 journalists in jail, 70 of them on charges related to the failed coup in July. China, which had the dubious distinction of leading the world in throwing reporters behind bars in 2015, began to crack down harder on journalists and editors in Hong Kong this year. Egypt, Iran, Israel, and Azerbaijan have all been turning the screws on reporters. Even here in the United States, the police have arrested or harassed citizen reporters trying to document police brutality, and Georgia is attempting to prosecute a woman who did nothing more than record a public rally put on by the state Republican Party.

But why go after single reporters when you can shut down an entire newspaper? That’s certainly been the approach of Turkish President Recep Tayyip Erdogan, whose evolution from reformer to reactionary has been dramatically accelerated by his heavy-handed approach to the press. His move against Zaman in March, however, represented a new front in the battle.

Zaman was Turkey’s largest-circulation newspaper. After initially supporting the Turkish leader and his Justice and Development Party, the daily reversed gears and began to launch investigative probes of Erdogan’s political circle. Like two other previously state-appropriated periodicals, Bugun and Millet, Zaman was also linked to the Fethullah Gulen movement (which Erdogan claims was behind the coup). The closure looked like an anti-terrorist operation. Using tear gas and a water cannon, the police stormed the building and escorted the editor and his colleagues out of the building. Shortly thereafter, a new pro-government edition of Zaman appeared. In the wake of the attempted coup in July, Erdogan closed the paper for good, along with a slew of Gulen-linked media outlets, including 45 newspapers, 16 television stations, 23 radio stations, and 15 magazines. Last month, the government closed another 20 radio and TV stations, many of them connected to ethnic Kurds.

Though he claimed that Zaman supported the “terrorist” Gulen faction, Erdogan was also angered by the paper’s 2013 investigation of high-level corruption that involved money-laundering and fraud associated with an oil deal with Iran. The Turkish state went after Zaman not only to prevent it from publishing news about current affairs but also to eliminate its version of history. The authorities wiped clean the newspaper’s archives, consigning all 27 years of articles to the dustbin. The government that controls the past can control the future.

Just this week, Viktor Orban achieved the same goal in Hungary but through different means. He didn’t send police into the offices of Nepszabadsag. But the Hungarian government managed to use its political influence behind the scenes to silence a paper that in its final editions exposed the corrupt dealings of the governor of the Central Bank, a major embarrassment for Orban’s Fidesz government. The ruling party then had the gall to pretend in its official announcement that it was respecting, not undermining the rule of law: “The suspension was a reasonable business decision rather than a political one. It would be in violation of the freedom of the press if we interfered with a decision of a media owner.”

Nepszabadsag, once the official newspaper of the Communist party and then relaunched under the ownership of the Socialist Party, was Hungary’s largest daily. So, the economic argument rings hollow. Even the far-right-wing party Jobbik, which has found common cause with Fidesz on a number of issues, didn’t fall for Orban’s ploy. “The total undermining of Népszabadság is the latest example of Viktor’s Orbán’s megalomania,” a Jobbik spokesperson said. “The only aim of Fidesz is to either gain 100% control over Hungarian media or to obstruct it.”

Until relatively recently, Hungary had one of the most vibrant and interesting media landscapes in the region. Yet in a mere six years, since the beginning of his first term in office, Orban has bulldozed that landscape, leaving behind only monuments to himself and his party. The EU is not likely to do anything — its past condemnations of Orban’s illiberal policies may well have increased his stature inside the country. It’s up to Hungarians themselves to reclaim their country.

Hungary and Turkey are not alone. The year has been full of newspaper seizures. South Sudan shut down a newspaper for reporting on the corruption of government officials. Oman did the same thing in August to a newspaper reporting on corruption in the judiciary. The state of Jammu and Kashmir in India banned the local paper, Kashmir Reader, for “disturbing the peace,” but really because it was reporting on the growing unrest in the province.

It’s striking that corruption is the common denominator behind many of these newspaper closures. Despite their appeals to nationalism or religion or some political ideology, the new illiberal leaders have been singularly focused on using the apparatus of the state to enrich themselves and their followers. Since their political opposition has often indulged in the same illicit activities, only the press and a few organizations devoted to transparency stand in the way of what political scientists call “state capture.”

Newspapers are closing in the United States all the time, though for different reasons. The latest casualty is the Pittsburgh Tribune-Review, leaving the western Pennsylvania city with only one daily. Last spring, The Tampa Tribune bit the dust. There are now fewer than a dozen two-paper towns in the United States. As many publications move online, the age of daily print journalism is winding down.

At the same time, the media landscape has become ever more concentrated. In 1983, 50 corporations controlled 90 percent of U.S. media. Now that number has dwindled to a mere six corporations.

Sure, you can find on the web a few islands of investigative journalism and provocative alternative opinion (in an ocean of outlandish conspiracy theories). But what Orban and Erdogan are doing consciously in Hungary and Turkey is happening as a result of market calculations here in America.

Of course I’m a big fan of online media. And I’ve indulged over the years in plenty of critiques of mainstream media. But independent journals of record, with budgets for investigative journalists and fact-checkers, are indispensible in holding elected leaders accountable. These are the bloodhounds who can really follow the money. But substantial news outfits are in a losing battle for readers with clickbait operations like BuzzFeed.

In mid-August, Donald Trump showed both his ignorance of and contempt for the press when he tweeted: “It is not ‘freedom of the press’ when newspapers and others are allowed to say and write whatever they want even if it is completely false!”

Actually, that’s exactly what freedom of the press is. It’s not up to Trump or Orban or Erdogan to decide what is “completely false.” That is up to the fact-checkers, the courts, and ultimately, the dwindling group of citizens around the world who care passionately about politics and truth, those two often incommensurate categories that are, rather than the “elite,” the real target of Donald Trump’s crusade.