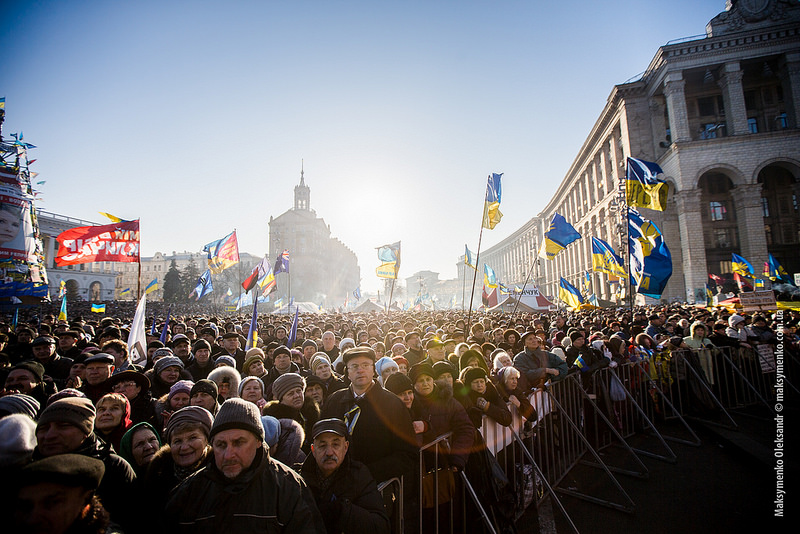 For better or worse, the revolution in Ukraine was the work of Ukrainians, not Washington. The U.S. isn't in a position to govern what happens next, nor should it be. (Photo: Sasha Maksymenko / Flickr)

Straight Talk on the U.S. and Ukraine

Given the limits of its power and its own compromised relationship with international law, the U.S. isn't in a position to do much about Ukraine.
By Stephen Zunes | March 13, 2014

As someone who has spent his entire academic career analyzing and critiquing the U.S. role in the world, I have some news: While the United States has had significant impact (mostly negative in my view) in a lot of places, we are not omnipotent. There are real limits to American power, whether for good or for ill. Not everything is our responsibility.

This is certainly the case with Ukraine.

On the right, you have political figures claiming that Obama’s supposed “weakness” somehow emboldened Moscow to engage in aggressive moves against Crimea. Sarah Palin, for example, claims that Obama’s failure to respond forcefully to Russia’s bloody incursion into Georgia in 2008 made Russia’s “invasion” possible, despite the fact that Obama wasn’t even president then and therefore couldn’t have done much.

Even some Democrats, like Delaware senator Chris Coons, claim that Obama’s failure to attack Syria last fall made the United States look weak.

In reality, there seems to be little correlation between the willingness of Moscow to assert its power in areas within its traditional spheres of influence and who occupies the White House: The Soviets invaded Hungary in 1956 when Eisenhower was president; the Soviets invaded Czechoslovakia in 1968 when Johnson was president; the Soviets successfully pressed for martial law in Poland in 1981 when Reagan was president; the Russians attacked Georgia in 2008 when Bush was president. In each case, as much as these administrations opposed these actions, it was determined that any military or other aggressive counter-moves would likely do more harm than good. Washington cannot realistically do any more in response to Russian troops seizing Crimea in 2014 in the name of protecting Russian lives and Russian bases than Moscow could do in response to U.S. troops seizing Panama in 1989 in the name of protecting American lives and American bases.

There is an equally unrealistic view of supposed American omnipotence from some segments of the left in their claims that the United States was somehow responsible for the popular uprising that toppled the Yanukovych regime last month.

First of all, it’s not true that the United States government “spent $5 billion to destabilize Ukraine,” as some agitators have claimed. That figure is the total amount of money provided to the country since independence in 1991, which includes aid to pro-Western Ukrainian administrations (which the United States presumably would not have wanted to destabilize). Like most U.S. foreign aid, some of it went for good things and some for not so good things. There was also some funding through the National Endowment for Democracy and other organizations to some opposition groups that were involved in the recent insurrection, but this was in the millions of dollars, nothing remotely close to $5 billion. And this aid went primarily to centrist groups, not the far right, so claims that the United States “supported fascists” in Ukraine are without foundation.

It’s also unfair to imply that such aid was somehow the cause of the uprising, thereby denying agency to the millions of Ukrainians who took to the streets in an effort to determine (for better or worse) their own future. To claim that U.S. aid was responsible for the Orange Revolution of 2005 or the more recent revolt is as ludicrous as President Reagan’s claims in the 1980s that Soviet aid was responsible for the leftist revolutions in Central America.

The uprising that overthrew Ukrainian president Viktor Yanukovych and his allied pro-Russian oligarchs was not a classic nonviolent pro-democracy uprising like those that have toppled scores of dictatorships in recent decades. Yanukovych was democratically elected, and the forces that ousted him included—though were not dominated by—armed, neo-fascist militias. At the same time, Yanukovych’s rampant corruption, repression, and divide-and-rule tactics had cost him his legitimacy in the eyes of the majority of Ukrainians. The protesters were primarily liberal democrats who engaged in legitimate acts of nonviolent resistance against severe government repression, many of whom spent months in freezing temperatures in a struggle for a better Ukraine dominated by neither Russia nor the West. To label them as simply puppets of Washington is as unfair as labeling peasant revolutionaries in El Salvador as puppets of Moscow.

At the same time, given that the new government includes corrupt neo-liberal oligarchs along with representatives of the far right, it would be equally wrong to assume that the change of government represents some kind of major progressive democratic opening. And the refusal of the opposition to abide by the compromise agreement of February 21, which called for early elections and limited presidential powers, and seize power directly raises questions regarding the legitimacy of the new government. Whether for good or for ill, however, and despite whatever attempts Western powers have made to influence the outcome, the change of government is ultimately the responsibility of Ukrainians, not the Obama administration.

While the United States and the European Union no doubt want to lure Ukraine in a pro-Western direction and the Russians even more desperately want Ukraine to stay within their orbit, Ukrainians themselves—given the country’s centuries of subjugation—are strongly nationalistic and do not want to be under the control of Russia or the West. With a population of 45 million and significant agricultural and industrial capacity, they are not a country that would passively accept foreign domination.

Just as U.S. military action in the greater Middle East in the name of protecting Americans from Islamist extremism has ended up largely encouraging Islamist extremism, Russia’s actions in the name of protecting Russians from right-wing Ukrainian ultra-nationalists will likely only encourage that tendency as well. The United States, therefore, needs to avoid any actions that could encourage dangerous ultra-nationalist tendencies among either Russians or Ukrainians. Polls show most Russians are at best ambivalent about the Kremlin’s moves in Ukraine. Provocative actions by the United States would more likely solidify support for Russian president Vladimir Putin’s illegitimate actions.

One factor that may have partly motivated Russian moves in Ukraine could have been talk by U.S. officials of incorporating Ukraine in the NATO alliance, a move which—given the history of foreign invaders conquering Russia through the Ukraine—would be completely unacceptable to the Kremlin. However, Russia’s moves in Crimea may make such a scenario more likely rather than less likely. To ease such tensions, even such hawks as former U.S. National Security Advisers Henry Kissinger and Zbigniew Brzezinski acknowledge the limits of American power in such a situation and have proposed a compromise whereby Ukraine, like Finland during the Cold War, would be prohibited from joining any formal military alliance, and the Russian-speaking areas would be granted a degree of autonomy. Should President Obama consider such a compromise, however, he would almost certainly be attacked not only by Republicans but by hawkish Democrats as well. Indeed, Obama’s former Secretary of State Hillary Clinton, in comparing Putin to Adolph Hitler, has contributed to a political climate making the Obama administration’s ability to accept such a compromise all the more difficult.

Thousands of Russian troops have fanned out from Russian bases in Crimea and, under Russian control, the Crimean parliament—dominated by ethnic Russians—has unilaterally declared independence and called for a snap referendum to reincorporate the peninsula into Russia. This is a clear violation of the 1994 Budapest Treaty—signed by Russia, Ukraine, the United States, France, Great Britain, and China—guaranteeing, in return for Ukraine giving up its nuclear arsenal inherited from the Soviet Union, the country’s territorial integrity and security assurances against threats or use of force.

As a result, there does need to be a strong international response to Russia’s aggrandizement. Unfortunately, the United States is hardly in a position to take leadership on the matter.

For example, Secretary of State John Kerry has chastised Putin’s actions in Crimea on the grounds that “You just don’t invade another country on phony pretext in order to assert your interests,” adding that Russia’s actions constituted a “direct, overt violation of international law.” While this is certainly a valid statement in itself, it’s ironic coming from a man who so vigorously supported the illegal U.S. invasion of Iraq on the phony pretext that Saddam Hussein had “weapons of mass destruction.” Indeed, while Obama, to his credit, opposed the Iraq War, the fact that he appointed so many supporters of that illegal invasion and occupation to major foreign policy positions in his administration has severely weakened the United States’ ability to assume leadership in challenging the Kremlin on its own unilateral excesses.

Similarly, in 2004, Kerry, Joe Biden, and other members of Congress who later became key Obama administration officials unconditionally endorsed then-Israeli prime minister Ariel Sharon’s plan to incorporate large sections of the occupied West Bank into Israel, a proposal denounced by international legal authorities worldwide as an illegal annexation. This makes it very difficult for the Obama administration to be taken seriously when it denounces the illegality of the proposed referendum to have Crimea incorporated into Russia.

There is also the fact that the Obama administration appears willing to accept Morocco’s illegal takeover of occupied Western Sahara (under the autocratic monarchy’s dubious “autonomy” proposal) in defiance of international law, a landmark 1975 World Court decision, and a series of UN resolutions. While illegitimate, the Russians are at least willing offer the people of Crimea a choice in a referendum. By contrast, the United States has effectively abandoned the United Nations’ insistence that there be a referendum in occupied Western Sahara, apparently in the recognition that the vast majority of Western Saharans would vote for independence.

In short, given the history of U.S. support for its allies’ land grabs and its own history of illegal invasions, this leaves the United States with little credibility to take leadership in this crisis. This in no way justifies or minimizes the seriousness of Russia’s aggression, of course. However, it underscores the fact that international leadership is not just a matter of being “tough.” It means being willing to abide by and defend the same international legal norms for yourself and your allies as you demand of your adversaries. Until there is such a change in policies, there is little the United States can do.