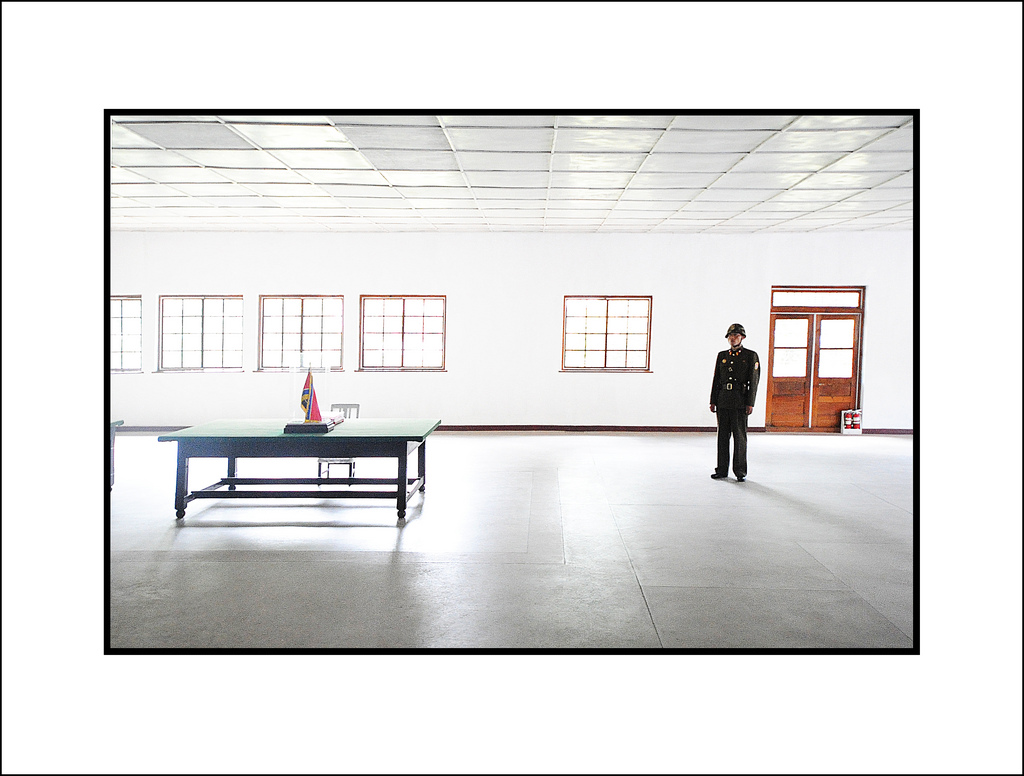 There's plenty of room for diplomatic progress on the North Korea issue, but the Obama administration doesn't seem interested in taking it on. (Photo: Adaptor- Plug / Flickr)

For North Korea to rise higher on the list of U.S. priorities, Washington policymakers will have to stop considering it in isolation.
By John Feffer | March 14, 2014

It’s not easy for North Korea to grab headlines these days. Over the last couple weeks, Pyongyang launched several short-range missiles and rockets. They barely caused a ripple. The world has been focused on the showdown in Ukraine, the nuclear negotiations with Iran, and the Oscars.

North Korea also barely registers on the U.S. policymaking agenda. Washington no longer holds out hope that the young leader Kim Jong Eun is a bold new reformer. At the same time, he seems to have adopted the same combo policy as his father—one part engagement to two parts aggressive rhetoric—in relations with neighboring countries. So, the Obama administration continues with its approach of “strategic patience.” This is just a fancy name for ignoring North Korea and hoping the problem just goes away.

But of course North Korea doesn’t just go away. It still possesses a nuclear program that is considerably more advanced than what the Iranians have. It likely has a robust supply of the same chemical weapons that Syria has been pressured to give up. And there are enough territorial disputes between North and South to spark the kind of conflict that is currently unfolding in Crimea.

A major flaw in the approach the United States has taken toward North Korea is the “all-or-nothing” attitude. Either North Korea agrees at the beginning that it will give up its entire nuclear program or all bets are off.

True, the Obama administration was burned two years ago with the Leap Day agreement, which announced a moratorium on missile tests and new international inspections in return for a resumption of food aid and a new round of negotiations. The agreement unraveled even before the ink was dry when North Korea announced a new satellite launch for April of that year. It’s certainly understandable that Obama doesn’t want to invest whatever remains of his political capital in another approach toward Pyongyang.

But still I feel strategically impatient that the Obama administration isn’t paying more attention to the country.

A recent publication by the National Security Network and the National Committee on North Korea offers the administration some suggestions on how to make some progress on what remains the most intractable problem that the 20th century has gifted to the 21st. In place of “strategic patience,” which cedes control over the process to Pyongyang, the report recommends that the Obama administration shift over to “strategic shaping.”

This more proactive approach to North Korea consists of several interlocking proposals. First, it means talking to North Korea, and not just through the infamous back channel with the New York-based DPRK mission to the United Nations. High-level contacts, preferably initiated by a new official in charge of the North Korea portfolio, should be complemented by a range of other interactions: Track II diplomacy, military-to-military links, and enhanced regional discussions.

When it comes to the nuclear issue, the report identifies interim steps that are concrete and achievable. These include a return of IAEA inspectors to North Korea, a moratorium on missile and nuclear tests, and a freeze on plutonium production and uranium enrichment.

The report doesn’t go into detail into what the United States can offer in return. But North Korea has been quite clear about its demands. It wants economic sanctions relaxed. It wants a peace treaty to replace the armistice that ended the Korean War. It wants development assistance and not just humanitarian aid.

Competent negotiators certainly can take this mix of issues and figure out various paths to compromise. Just sitting down at the table together would be an important act of trust building.

But the more immediate problem than the gap between the negotiating positions of Washington and Pyongyang is the gap between the Obama administration’s doing something and continuing to do nothing. “Strategic shaping” is an eminently sensible approach. But for everyone watching the U.S. government scrambling to achieve progress on multiple foreign policy fronts, the question remains: what will it take for North Korea to rise higher on the administration’s already crowded list of priorities?

Here are three possibilities. The first is entirely reactive. North Korea tests another nuclear device, and suddenly the Obama administration is forced to respond in some way. But Washington has exhausted all of the feasible sticks in its arsenal of punishments, from more vehement denunciations to more economic sanctions and tighter non-proliferation regimes. Moreover, negotiations after a provocation are that much more difficult given the accusations of “appeasement” that administration critics are always quick to raise.

The second possibility is far-fetched. China suddenly changes its mind and decides to turn the screws on its putative ally. Successive U.S. administrations have indulged in this fantasy. Yes, North Korea is a nettlesome partner for China. It doesn’t listen to advice, much less obey orders, and Beijing certainly doesn’t need another nuclear power on its border. But the same holds true for the relationship between Israel and the United States, and yet Washington maintains that alliance for larger strategic reasons.

Which brings us to the third possibility. The United States suddenly rediscovers geopolitics.

For the last 20 years, the United States has addressed North Korea as an isolated issue. This is not surprising given that the country is, itself, rather isolated. But that’s no excuse for viewing U.S.-North Korean relations as a narrow zero-sum game. For North Korea to rise higher on the list of priorities of the U.S. government, Washington policymakers will have to perceive other interests at play in engaging North Korea.

For instance, Washington is eager to tap into Asian economic growth and has aggressively pursued the Trans Pacific Partnership to that end. But what if the United States had a bigger stake in expanding the transportation links and energy pipeline network in Northeast Asia, where North Korea plays such a pivotal role? Washington is also concerned about access to rare earth elements that China has previously monopolized. But recent discoveries suggest that North Korea might possess six times the amount of rare earth elements as Beijing.

It’s not just economics. A geopolitical tactician like Henry Kissinger would surely view U.S. engagement with North Korea as a balancing strategy against the power of China. That was a major motivation behind Nixon’s opening to China in the 1970s—to balance the power of the Soviet Union. North Korea is always looking for a better deal, so it would welcome an opportunity to break its dependency on China to work more closely with the United States.

It’s important to point out that geopolitics is an amoral enterprise. Geopolitics is about power and advantage. These are compelling arguments inside the Beltway in Washington, DC. By appealing to crass interests—access to raw materials, reduction of Chinese influence—those who support engagement with North Korea might get the ear of U.S. powerbrokers.

The recent report of the UN Commission of Inquiry on the abysmal human rights situation in North Korea is a powerful reminder, however, that foreign policy should never be just about power and advantage. So, even as we work to break down Cold War barriers between Washington and Pyongyang, we cannot lose sight of those who are suffering the most because of this situation. But for anyone who wants to see a change in the current status quo toward North Korea—a transformation of the Cold War environment and an improvement in human rights—strategic patience just doesn’t cut it any more.