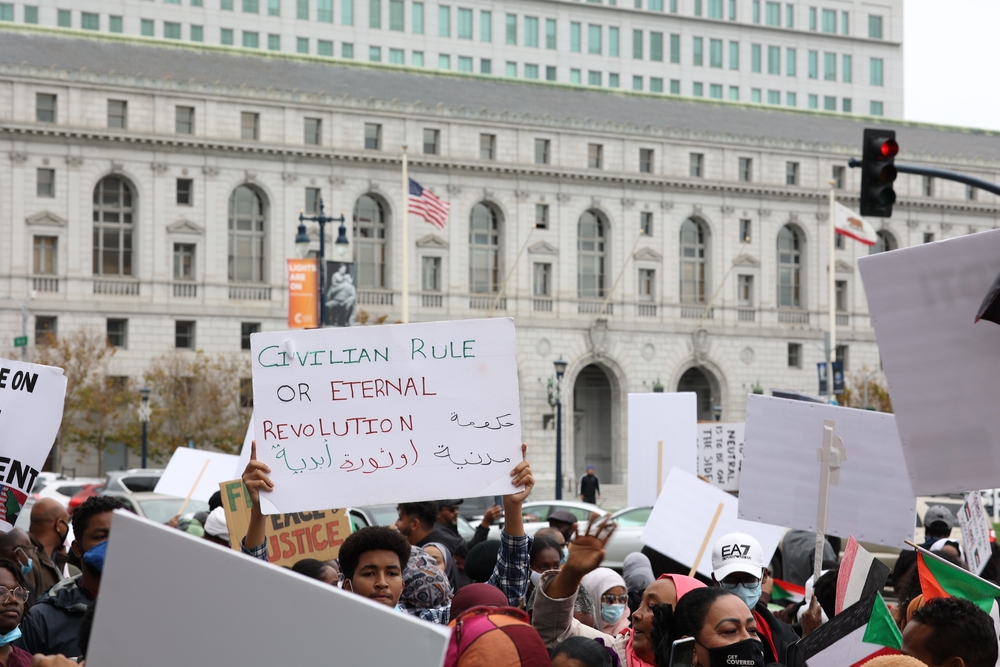 Since the October 25 military takeover, violent repression has returned in full force. Can the international community support the rule of law?
By Mohamed Osman | November 18, 2021

In September, I sat down in Khartoum with the mother of a medical student killed by security forces during Sudan’s 2018-2019 protests.

“The reason why I wake up every day is that I have a little hope that I can find justice for my son,” she confided. “This will not be only for him, but to prevent other parents from having to face the devastation of losing their children because of state violence.”

In this period of uncertainty for Sudan, one thing is clear: It would be fundamentally wrong and dangerous to jettison justice for serious past and more recent abuses in the name of political expediency.

Our research and that of many other organizations to document widespread abuses in Sudan over the last three decades shows that rampant impunity for atrocities has fueled ongoing violations and insecurity. This impunity has long allowed abusers sitting at the head of the command chain to wield more power.

Key leaders within the military side of the power-sharing government that was ousted by the military on October 25 were themselves a carryover from the regime that was ousted in April 2019, with their own share of unanswered alleged abuses. In fact, just a few months before the signing of the transitional agreement in August 2019, these same military leaders — including Mohamed Hamdan Dagalo (“Hemedti”), the commander of the Rapid Support Forces (RSF) — oversaw the violent dispersal of the protesters’ sit in in Khartoum.

Sudan’s transition has been a turbulent one from the get-go. The transitional government had to deal with the heavy legacy of past repression, including how to handle former president Omar al-Bashir and two other high level officials wanted by the International Criminal Court on charges of genocide, crimes against humanity, and war crimes. All this while tackling a terrible economic reality.

Abuses continued during the transition, and impunity for serious crimes remained largely the norm.

While some small but important progress was made on accountability — notably through a handful of prosecutions for protest killings, embryonic legal reforms, and improved cooperation with the International Criminal Court — Sudan’s partners could have done more to bolster the reforms on which success of the transition toward civilian rule depended.

Instead, security forces were able to continue to push back on essential actions for ensuring justice, including lifting immunity, handing over members of the security forces, and security sector reform. Many Sudanese became increasingly frustrated that not enough attention was being given to their calls for justice.

The impact was felt throughout the country, and nowhere more than in restive Darfur, the site of decades of atrocities by the former regime.

Over the last two years, West Darfur’s capital, Al-Genaina, has been wracked by three bouts of serious fighting, which left hundreds dead, thousands displaced, and resulted in massive destruction of civilian property. After the hybrid peacekeeping mission in the region had withdrawn, the government was charged with protecting civilians, but our research has shown how RSF forces — the very forces responsible for years of abuses there — attacked civilians while other security forces stood by.

The military takeover on October 25 punctured the hopes for Sudan’s transition to civilian rule. In the days that followed, the gloves came off, and the security forces resorted to their well-trodden and brutal tactics. They used excessive, including lethal, force against peaceful protesters; forcibly disappeared over two dozen high-level officials and protest leaders; and shut down the internet. At least 38 people have been killed in Khartoum, and hundreds have been injured across the country.

As protests against the takeover have continued, domestic, regional, and international actors have offered to mediate to reach a political deal. Among others, the UN Integrated Mission to Support the Transition in Sudan had offered its good offices to assist such dialogue.

Protesters are concerned by the lack of transparency surrounding these multiple initiatives and fear these processes could yet again end up allowing abusers, including military commanders, off the hook. Media reports on discussions underway have not included any reference to accountability.

If the international community wants to put a sustainable end to cycles of instability and repression in Sudan, it needs to prioritize justice and send an unambiguous message that committing abuses will no longer be a means to operate, far less succeed. It is also the essential starting block to build a society based on respect for rule of law and rights.

All political processes in Sudan need to guarantee that there will be no rollbacks on gains made during the transition, no immunity handed out, and that international actors cannot afford to put justice on the back-burner. The last two weeks have shown all too well that this doesn’t end well. It only empowers the abusers.

Mohamed Osman is the Sudan researcher at Human Rights Watch.