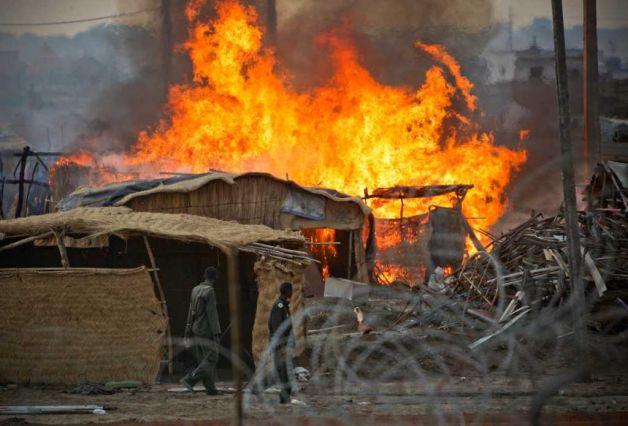 The crisis in Abyei requires an immediate international response.
By Terah Edun | June 1, 2011 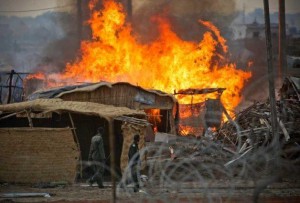 On May 22, 5,000 Northern Sudanese troops invaded Abyei, violating several peace agreements with South Sudan. It only took two days for the Northern Sudanese army to overrun the South Sudanese troops with a combined aerial and infantry campaign. According to UN estimates, the invasion forced 25,000 – 30,000 individuals to flee the area. This invasion could represent an effort by Khartoum to gain a firm foothold in Abyei before the formal declaration of independence by South Sudan on July 9.

The invasion destroyed the fragile mechanisms established by the North and South to resolve their disputes. The Abyei Protocol established in the 2005 Comprehensive Peace Agreement (CPA) created the Abyei Boundaries Commission, which released a report to “define and demarcate the area of the nine Dinka chiefdoms transferred to Kordofan in 1905.” The CPA also mandated that a local executive council rule Abyei. During the invasion Sudanese President Omar Al-Bashir dissolved this council, and several of its members are still missing. In their place Khartoum has installed a caretaker administrator with a military background, Brigadier Izzedine Osman, who led the invasion of Abyei.

Under the Kadugli Agreement signed in March 2011, Northern and South Sudan agreed to facilitate joint troop patrols within the Sudanese Armed Forces in the Abyei area. These joint patrols are considered units of the Sudanese Armed Forces (SAF) under the control of Khartoum. The integration of the northern and southern troops has gone anything but well. As can be expected with a 50-year history of civil war, frequent fighting and dissent between the troops and police factions have occurred.

This infighting, for instance, likely contributed to the May 19 attack on a UN convoy by 200 troops of the Sudanese Armed Forces (SAF) that killed as many as 70 soldiers. SAF officials said the convoy attack had been carried out by Sudan People’s Liberation Movement/Army (SPLM/A) troops with heavy weapons. The UN Mission in Sudan has said the attackers were unknown but have called on the Southern government to investigate the claims immediately and hold the perpetrators accountable.

In Al-Bashir’s words northern Sudan is only occupying Abyei to stabilize and curtail transient militias present in the region. But Abyei is a critical repository of 25 percent of Sudanese oil reserves, and therefore both Sudans have a strong incentive to keep it under their control. On May 24, Al-Bashir declared, “Abyei is northern Sudanese land…we will not withdraw from it.” This firm resolution to stand his ground marks an about-face from his previous desire to find a peaceful resolution to the Abyei issue. In contrast to Bashir’s position, the Sudanese Ambassador to Kenya Kamal Ismail Saeed recently promised that the North would retract its troops after issues of security had been solved. According to Saeed, “24 provocations” including the attack on the UN convoy led to the occupation. On Tuesday, May 24, a SPLM/A spokesperson said that his soldiers await orders from the Juba government as long as the northern troops do not move beyond the river that divides the territory between northern Sudan and South Sudan.

The decision of whether Abyei belongs in northern Sudan or South Sudan is still undecided. The two sides have agreed on the importance of holding a referendum but disagrees on who is qualified to vote. Northern Sudan advocates full voting rights for all of the Arab Misseriya including those who are nomadic and only reside in Abyei seasonally. South Sudan is adamant that only permanent residents be eligible to vote, the majority of who are the Dinka Ngok.

U.S. Special Envoy to Sudan Princeton Lyman has indicated that the United States is considering sanctions against northern Sudan. In particular Sudan would not be dropped from the State Sponsors of Terrorism List. Princeton Lyman further added in an al Jazeera interview “I am optimistic in this sense: These two entities – Sudan and soon-to-be independent South Sudan – need each other.” This need, which is predicated on the export of oil (South Sudan has the oil reserves and northern Sudan has the refining capabilities), could be the only thing that brings escalating tensions down.

The north is also firm in its desire to not let actions in Abyei interfere with the fulfillment of the Comprehensive Peace Agreement and the creation of South Sudan on July 9 — just so long as South Sudan doesn’t take Abyei with them. Meetings between the SPLM (the ruling party of South Sudan), the National Congress Party (the ruling party of Sudan), the African Union, and former South African president Thambo Mbeki took place May 28 in Ethiopia. Diplomats were able to agree on a demilitarized zone along the border between the two countries that would be monitored by international peacekeepers. But the North has not agreed to withdraw from Abyei as part of this agreement.

President Obama told the British parliament last week that the United Nations Mission in Sudan needed more support from international backers: “As increasing tensions in the Abyei region threaten to derail Sudan’s comprehensive peace agreement, we’re working closely together to encourage the parties to recommit to a peaceful resolution to the crisis, and calling on the rapid reinforcement of the U.N.’s peacekeeping presence in the region.”

Obama is right. But more than encouragement, Sudan as a whole needs international action and involvement. Perhaps this military action is characteristic of the Sudanese who like to resolve issues in the “last five seconds before midnight,” as African Union advisor Fouad Hikmat has argued. Still, this situation needs to be ended before further violence ensues.

Condemning the actions of Al-Bashir – such as when the U.S., French, and Russian UN ambassadors called on “the government of Sudan to halt its military operation and withdraw immediately from Abyei town and its environs” – is not enough. It’s time to get the Sudanese leader to the table to discuss an immediate withdrawal from Abyei and finally nail down who is eligible to vote in an Abyei referendum. As part of these negotiations, it is also essential to confirm whether or not Sudan is repopulating the area with Misseriya Arabs and if they intend to go further and block the return of the Dinka Ngok who have fled to areas within the South Sudan borders. If they don’t return due to intimidation tactics and threats, they could loose their opportunity to vote in the Abyei referendum.

In the words of Special Envoy Lyman, “the danger of further clashes is very great.” Members of the UN Security Council, including U.S. ambassador Susan Rice, arrived in Sudan as the Abyei crisis broke out. Al-Bashir launched his attack under the noses of foreign dignitaries to demonstrate that he didn’t fear retribution from the international community. So far, it would seem that he doesn’t have anything to fear. In response to the Darfur Genocide his case was referred to the International Criminal Court, which issued an arrest warrant on March 4, 2009. No one acted on it — not even the United Nations. The UN is supposed to act as an international peacekeeping body that intervenes in humanitarian situations, but those interventions rarely amount to anything more than a tongue lashing and, if it can get enough votes, the application of economic sanctions.

With the UN unequipped to handle or stop a genocide in Africa, the world’s nations and the United States are expected to step up to plate. But U.S. hands are full juggling the military offensives in Afghanistan, Pakistan, Iraq, and Libya. Ambassador Rice proudly tweeted on May 22 that the “Security Council demands that SAF withdraw forces from Abyei town immediately.” But what authority does she have backing that demand?

On Sunday, the foreign affairs spokesman for northern Sudan informed the UN Mission in Sudan that they must leave when South Sudan becomes independent on July 9. Hua Jing, the UN spokesman, responded that ultimately the Security Council had to make this decision. For years, national governments stood by as atrocities in Darfur were committed. Many declarations were made and protests lodged. But by the time a substantial intervention had taken place several hundred thousand people had died. This time the international community, in the form of 10,429 UN uniformed personnel and 4,162 UN civilian staff, is on the ground before war breaks out. With the mission threatened with removal, the administration of Abyei in military hands, and a crisis impending, tough negotiations must take place to stop a third Sudanese civil war before it starts.

Northern Sudan wants to control the oil fields in Abyei for economic reasons. Perhaps a more favorable revenue split would entice the North to reinstall the Abyei executive council, allow the Dinka Ngok to return under the protection of the joint integrated forces, and agree to a date for a referendum and who is eligible to vote. Currently 60 percent of Sudanese oil revenues is allotted to the North, which has the refineries, and 40 percent to South Sudan, where the oil reserves lie. In the case of Abyei the revenues could be split 70-30 in a long-term contract in which South Sudan eventually becomes a more equal partner as it develops its refining capability. With the carrot of oil revenues and the stick of international pressure, negotiators could avert a new war and make sure that the new country of South Sudan is not born in blood.

Terah EdunTerah Edun is a Foreign Policy in Focus contributor.