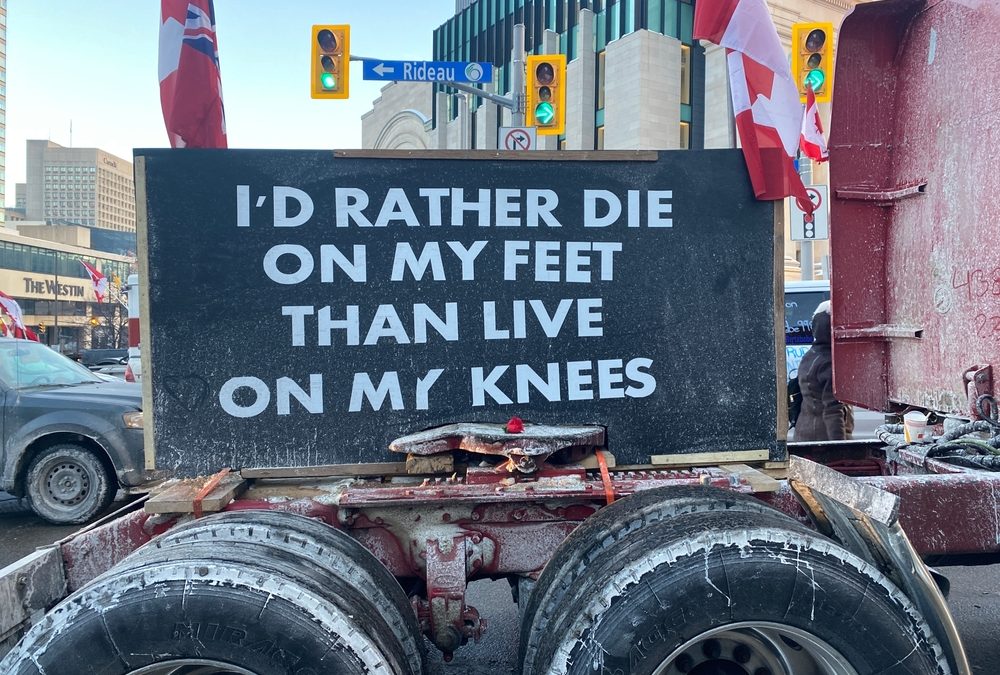 The "Freedom Convoy" in Canada wants to spread its anti-government, antisocial, and ultimately self-defeating messages far and wide.
By John Feffer | February 16, 2022

Once upon a time there were three people in a boat, out in the middle of the sea. It was a beautiful day, and the sea was calm. Two of the people were fishing contentedly.

The third removed a drill from his bag and started to make a hole in the bottom of the boat.

“What are you doing?!” the other two exclaimed in horror.

“It’s none of your business,” the third person replied, continuing to drill. “I’m making the hole underneath my own seat.”

It is a fundamental American principle that all citizens have the inalienable right to life, liberty, and the pursuit of happiness. That’s an easy enough principle to uphold if all of us are sitting in our own boats far enough away from everyone else so that our fishing lines don’t get tangled together. If we’re stupid enough or sufficiently self-destructive to sink our own boats, so be it. The only person to suffer is the wielder of the drill.

Hermits, a few lonely survivalists, and those unfortunate enough to be locked in solitary confinement might be able to make the case that their actions affect only themselves.

The rest of us, however, are all in the same boat, and that boat is called “society.” To live together in this boat, we have to obey certain rules. And one of those is to leave our drills at home in the interests of public health.

The latest incarnation of the suicidal driller is the Canadian trucker who not only refuses to get vaccinated for his or her own good as well as the good of everyone else but has also decided to hold the entire city of Ottawa hostage and block traffic and trade at border crossings between the United States and Canada.

The “Freedom Convoy” began at the end of last month with a small number of Canadian truckers protesting a requirement to be vaccinated to transport goods across the border into the United States. The Canadian government has mandated that federal employees and workers in key sectors (law enforcement, health care) be vaccinated against COVID-19. Truckers in general are not required to be vaccinated.

Both laws seem eminently reasonable. Judging by the bad behavior of some of the protesters in Ottawa—breaking traffic laws, blaring their horns and spewing diesel at all hours, demanding food from homeless shelters, harassing the masked—these are exactly the type of folks you’d expect to drive across the border with a cough and a stuffy nose and infect everyone at a truck stop all the while proclaiming that “it’s none of your business what I do.”

Let’s be clear: these protesters are a minority. Most Canadian truckers—upwards of 90 percent—are vaccinated. Further, the protests are not popular among Canadians: 65 percent of those polled view the truckers as representing a small minority of the selfish. Further, the protests are truly quixotic, for they have persisted even as Ottawa has begun to loosen vaccine restrictions with the receding of the omicron wave.

As for the “evil” vaccine mandates that the truckers oppose, they worked. They contributed to “lifting Canada’s vaccination rate to one of the highest in the world, protecting vulnerable sectors of society such as hospitals and long-term care and helping us achieve one of the lowest rates of death in the developed world,” reports Adam Miller at CBC.

Who can argue with success? Apparently, some can….

The Canadian government initially adopted a laissez-faire attitude toward the protesters, issuing a few tickets and hoping that the movement would run out of fuel. When that didn’t happen, thanks to supporters on both sides of the border sending them money and diesel, the government of Justin Trudeau moved against the truck blockades. On Sunday, police arrested several people and cleared away the rest of the protesters at the Ambassador Bridge in Windsor, Ontario, which is a key economic link to Detroit and the United States.

Not long after this action, Trudeau declared a national emergency, the first such declaration in more than 50 years (Trudeau’s father Pierre invoked an earlier version of the act in 1970 in response to the kidnapping of a government official and a British diplomat). Trudeau now has enhanced powers to end the blockades and the protests that are continuing throughout the country. The emergency declaration coincided with the police arresting 11 people associated with protests in Alberta who had a small arsenal of weapons that they apparently were willing to use to keep their blockade going.

The protests that began with a critique of government overreach have prompted the government to do just that to maintain public order. The Trudeau government has already implemented new financial restrictions to reduce even further the money supply flowing to the protesters.

Some civil libertarians have sided with the truckers. Legal pundit and perennial contrarian Jonathan Turley has championed their free speech and suggested that their acts, like those of the #BlackLivesMatter protests, fall into the same category of “good trouble” that lawmaker John Lewis famously advocated. Turley has it exactly wrong. Lewis was praising activists making personal sacrifices to improve the common good. He was not referring to people like the Canadian truckers, who are asking all of society to make sacrifices for their own individual good.

If this were just a Canadian matter, it would merit little attention (sorry, neighbor!). But if Canada can experience such a convulsion—moderate, polite Canada—then it does not bode well for the rest of the world.

Alas, even Canada has its intolerant, reactionary minority. The founder of the Proud Boys, Gavin McInnes, is originally from Canada, and white supremacist podcaster Stefan Molyneux, extremist Faith Goldy, and alt-right activist Lauren Southern all live there today. The far right experimented with a trucker convoy in Ottawa two years ago—United We Roll—that supported fossil fuel projects and had links to various hate groups. And now a whole new cadre of right-wing activists is coming to the fore around the current convoy.

Look, it’s still Canada. The alt-right People’s Party has exactly zero members in parliament. Without any obvious national leaders, the truckers have had to fall back on waving Trump banners. The contagion of the convoy will probably not spread very far in Canada. But it could prove more infectious elsewhere.

It has been a hard sell for rightwing populists to elevate the January 6 rioters to hero status given their treason, their violence against the police, and their calls at the time of the riot to lynch a very right-wing vice president. Truck drivers, on the other hand, come across as the voice of the heartland. As such, the “Freedom Convoy” has become a symbol for anti-vaxxers, the far right, and anti-globalist activists the world over.

In addition to attracting millions of dollars in support from 52,000 U.S. contributors, the “Freedom Convoy” has already spawned U.S. copycats. A group called Convoy to Save America  mobilized protesters at a bridge heading north out of Buffalo in support of the Canadian truckers. And now, spurred on by Donald Trump and his minions, a U.S. convoy of freedom-loving truckers is preparing to converge on Washington, DC, though not likely in time to disrupt Joe Biden’s first State of the Union address on March 1.

Such a U.S. convoy has attracted the support of the usual ragtag of right-wing libertarians (like Sen. Rand Paul (R-KY)), untethered pundits (like Tucker Carlson), and out-of-work actors (like Ricky Schroder). The bottom line is that the illiberal elite—Wharton-educated Trump, Yale-educated Sen. Josh Hawley (R-MO), Harvard-educated Sen. Tom Cotton (R-AK), Stanford-educated financier Peter Thiel—are always in search of “authentic” voices of the people to mask their rich-boy elitism.

But their timing is off. As the omicron variant fades, so does the urgency of vaccine mandates. The “freedom fever” that has overcome a significant portion of the right-wing fringe—with some libertarians and confused leftists thrown in for diversity—is an opportunistic disease. It prompted millions in the United States and Europe to stage anti-immigration rallies until COVID (or Trump) took the issue off the table. It mutated into an obsession with pedophilia via QAnon that seems to have fragmented into near-irrelevance. After the 2020 election, it created a manic “anti-steal” movement that has had no real-world impact though it continues to infect the Republican Party.

Like the January 6 insurrectionists, the Canadian truckers took advantage of a city that did not take the threat seriously. But that trick won’t work again. Brussels, for instance, cordoned off the city this week from incoming truckers, nipping any vehicle blockade in the bud. Washington now also has sufficient advance warning.

Yet this “freedom fever” hasn’t run its course. The Ottawa variant will pass. Other, more powerful mutations will inevitably appear as governments try to impose mandates of one sort of another, particularly in response to climate change. It’s no surprise that immense gas-guzzlers are the vehicle of choice to bring an anti-government, anti-regulation, anti-science message to the capitals of the world.

The far right will “keep on truckin’” in its efforts to stop governments—not from building up militaries, launching wars, reinforcing surveillance systems, or abridging the human rights of minority groups but actually, in the case of the pandemic and climate change, acting to improve the common good. Throughout these shenanigans, the far right will be chanting “freedom, freedom,” louder and louder, to conceal the sound of the drill boring through the bottom of the boat.