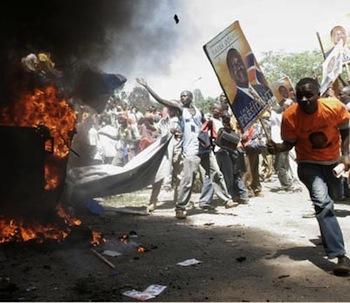 Supporting Peace – Not War – in Kenya

Should the United States choose to support long-term peace and stability over its short-term counterterrorism interests, there is much that it can do to help ensure a peaceful Kenyan election.
By Cassidy Regan | November 11, 2011 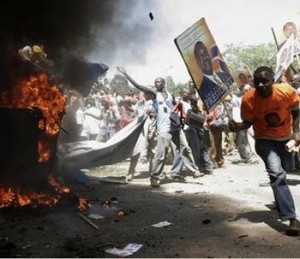 U.S. support for the recent Kenyan invasion of Somalia is disheartening for a number of reasons. Perhaps most disturbing, though, is that it provides further proof of a U.S. policy toward Kenya that emphasizes short-term interests in counterterrorism at the expense of long-term commitments to peace and stability. As Kenya’s next national elections approach and the potential for renewed violence in the country increases, the United States can and should shift its priorities toward those that will foster sustainable Kenyan and regional security – rather than those that threaten to undermine it entirely.

While the date of Kenya’s next general election remains the subject of debate (a recent amendment has proposed a change from August to December of 2012), the need to work toward preventing renewed electoral violence well before it occurs is unquestionable. Although important steps toward lasting peace have been taken since Kenya’s devastating electoral crisis in late 2007, many of the grievances most responsible for past conflict continue to plague its citizens.

Political resistance to changes in the status quo persists, and tensions over systemic inequality, ethnic divisions, land distribution, corruption, and high rates of youth unemployment remain. Moreover, the Kenyan government has been slow to hold perpetrators of the 2007 post-election atrocities accountable, causing Kenyans to question the government’s commitment to ending impunity for political violence and leading to an external investigation of the crimes by the International Criminal Court.

Despite the recent political turmoil, Kenya’s robust civil society, strong economy, and stable institutions provide much of the foundation necessary for peace. Many in Kenya continue to work tirelessly toward healing and empowering their communities, and their successes have gone so far as to include peacefully passing a new constitution that contains much-needed reforms. With sufficient effort and investment, the prevention of renewed electoral violence in Kenya is truly possible – and there is much that the international community, including the United States, can do to support it.

During the 2007 post-election violence, both regional and international actors played an integral role in helping to prevent a full-fledged civil war. While Kenyan civil society members pressed their leaders to end violence from within, diplomats, including then-Secretary of State Condoleezza Rice, provided critical political pressure and support for the successful African-led mediation team. The resulting peace agreement demonstrated how the tools of diplomacy, civil society mobilization, and international cooperation can help to halt atrocities and restore peace.

The Obama administration has emphasized Kenya as an important economic and political partner. It has consistently supported efforts toward reform, and U.S. assistance has helped fund everything from the rule of law to disaster readiness. Still, an underlying emphasis on counterterrorism over conflict prevention remains clear. Although the United States provided Kenya with at least $35 million in counterterrorism-focused funding in 2010 (including almost $4 million in foreign military financing and training), the bilateral account for stabilization operations received just $3 million.

Though lasting stability will only come through the continued dedication and empowerment of Kenyans themselves, the actions and policies of the United States and international community directly affect their efforts. By increasing investment in peacebuilding, pressing for a government that responds with equity and justice to the needs of its communities, and ensuring that plans for response are in place should deadly conflict erupt, the United States can take concrete steps toward peacefully preventing another crisis in Kenya – well before the elections begin.

Investment in the U.S. civilian capacity necessary for effective prevention and response to potential violence, including tools like the Complex Crises Fund and Civilian Response Corps, is critical – as is sufficient planning. Utilizing the new Atrocities Prevention Board at the National Security Council, the United States should create a coherent, interagency, and prevention-focused strategy that emphasizes early, sustained diplomatic engagement and support for local preventive efforts. Moreover, planning should be coordinated with key Kenyan and international partners, including the African Union and the United Nations.

With this infrastructure in place, the United States should also increase its funding for assistance to Kenya focused on conflict prevention and management, as well as for aid that addresses root causes of conflict and supports stability in the long-term. This would include more robust support for initiatives related to civic education, community peacebuilding, civil society, fair elections, and youth economic empowerment, particularly in volatile areas.

Given that up to 40 percent of the 2007 post-election violence was perpetrated by Kenya’s police forces, U.S. aid should also focus on improving Kenyan security to protect – rather than harm – its civilians. Programs to disarm local militias and reduce arms trafficking in the greater region, including the destruction of small arms and light weapons when possible, should be increased. Moreover, the United States must ensure that its own security assistance does not inadvertently enable further human rights violations. Units that receive aid must be actively monitored, and U.S. funds must be cut off immediately should abuses occur.

On the diplomatic front, the U.S. government should press Kenya’s leaders to implement the country’s constitution and to advance government accountability at both national and local levels. In anticipation of the election, the United States should urge a greater demonstration of commitment to volatile issues including land reform, corruption, and the resettlement of those internally displaced. It should also support both the International Criminal Court investigations of Kenya’s previous electoral violence and long-term reforms for the Kenyan judicial and criminal justice systems.

U.S. Stake in a Peaceful Election

Kenya has long served as the anchor of U.S. policy in its region, and it plays a crucial role in greater East African peace and stability. Recognizing both the wide impact that violence has and the role that global cooperation can play in preventing it, the United States should shift its policy toward one as supportive of a peaceful Kenyan election as possible. And above all else, it must make the prevention and peacebuilding initiatives that help promote long-term stability in Kenya its priority – rather than the counterterrorism interests that have served to encourage, not prevent, war.

For further recommendations, see the Friends Committee on National Legislation’s new policy brief on how the U.S. can help support peace in Kenya. To request a copy, email Cassidy Regan at cassidy@fcnl.org.

Cassidy ReganCassidy Regan is a Scoville Peace Fellow at the Friends Committee on National Legislation.