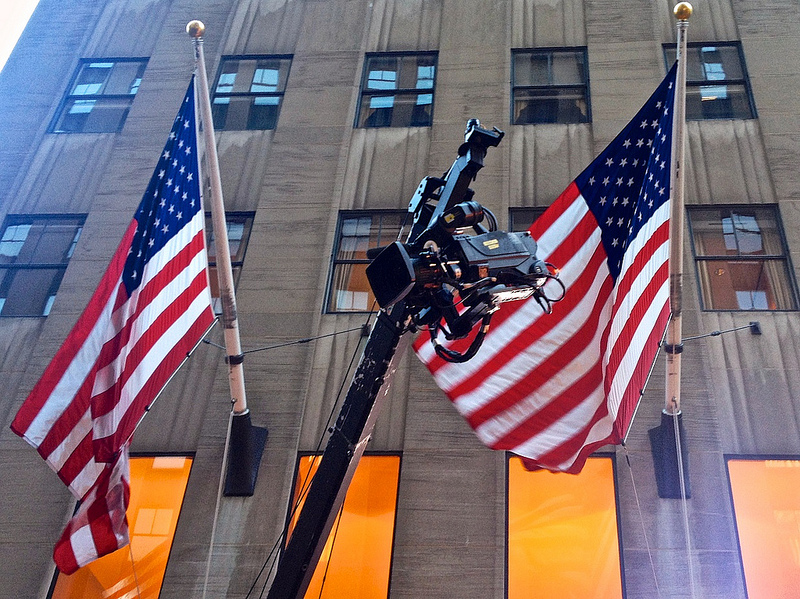 We've become all too comfortable opening up our lives to the scrutiny of others. (Photo: bclinesmith / Flickr)

Our privacy is getting hit from two sides — from corporations as well as the government.
By John Feffer | January 29, 2014

Some years ago when I was fielding complaints from authors through the National Writers Union — about not getting paid, about their work being spiked — I received a phone call from an irate woman. She told me that her best ideas were being stolen. She’d be watching television and a favorite drama would suddenly follow a plot line that she’d devised. Or she would go out to see a movie and hear the actors delivering her punch lines.

“Do you have any proof that you’ve been sending your scripts to these places?” I asked. “Do you have postal receipts, for example?”

“Oh, no!” she said indignantly. “These are ideas that I haven’t even put down on paper yet. They ‘ve obviously bugged my room and can read my mind!”

We have all laughed at the people who don tin foil hats to prevent the neighborhood telepaths — or the CIA or the Venusians — from invading their brains and stealing their secrets. “Paranoia: the destroyer,” as The Kinks put it so succinctly. But soon we all might feel compelled to start wrapping our heads in aluminum, or the Internet-age equivalent.

You’ve probably heard by now the story of the father from Minnesota who reamed out Target for sending his high-school daughter coupons for baby-related items. Was the retailer encouraging teenage pregnancy? He later had to apologize. Target, through its new statistical marketing tools, had determined from the young woman’s purchases that she was pregnant long before her hapless father had been informed of his impending grandfatherhood.

Or perhaps you’ve come across the more recent story about protestors in Kiev who received text messages that read: “Dear subscriber, you are registered as a participant in a mass riot.” The Ukrainian government was trying to scare protestors into going home, but it only managed to heighten their concerns about government surveillance. Our cell phones have become like those ankle monitors that people on parole must wear so that the authorities know where they are at all times.

Maybe you’re thinking that it’s only governments of an authoritarian bent that engage in such data collection. By now, I would hope that Edward Snowden has disabused you of this quaint notion.

Since 2006, the National Security Agency (NSA) has been collecting information on all phone calls by all Americans. On a more selective basis, it has been looking at the content of emails and tracking cell phone locations and tapping into the data hubs of Google and Yahoo. It has installed bugs on 100,000 computers all over the world. As David Cole writes in The New York Review of Books, “Snowden’s disclosures portray an insatiable agency that has sought to collect as much information as it possibly can, most of it relying on secret interpretations of law, often exploiting the fact that the law has not caught up to technology.”

Supporters of the surveillance methods have tried to downplay their intrusiveness by pointing out that the NSA does not monitor the content of the phone calls (though it can, and it has). This “metadata” covers whom you call and where you call from — as opposed to the actual words you utter during the phone call. Sound innocuous, even misleading, like judging a book by its cover? Stewart Baker, former general counsel of the NSA, is much more candid. “Metadata absolutely tells you everything about somebody’s life,” he says. “If you have enough metadata you don’t really need content…. [It’s] sort of embarrassing how predictable we are as human beings.” The statisticians at Target could testify to that.

President Obama has sought to reassure the public that the NSA is not some vast Orwellian entity. In a speech on January 17 — the 53rd anniversary of Eisenhower’s famous warning about the military-industrial complex — Obama portrayed surveillance as American as baseball and apple pie, constructing a self-serving version of American history that linked Paul Revere, the Union army, and World War II code breakers. We have been, in other words, a country of spies all along. (The difference is, of course, that all of those snoops were collecting information on adversaries and not their fellow citizens). The president went on to pledge greater presidential oversight, greater transparency, and additional safeguards for programs such as the bulk metadata collection.

But as James Oliphant points out in The National Journal, not very much has changed at all. “What President Obama has announced will have little operational effect on the National Security Agency’s collection of Americans’ data. And, significantly, the administration has attempted to dodge some of the biggest decisions, passing the ball to Congress, which will likely do nothing if recent trends hold.” In short, metadata will still be collected, it will still be searched, and the FBI can issue its “national security letters” to collect business records without a court warrant.

The American public is similarly not convinced. In a Pew Center poll, more than 70 percent of respondents said that the changes would neither protect the privacy of Americans nor make much different in the fight against terrorism.

The ethics of surveillance aside, the NSA program has proven to be a wastefully expensive search for a needle in a silo. Two separate studies have concluded that the metadata program has not done anything to protect the United States from terrorist attacks. According to the New America Foundation, the NSA program resulted in a single arrest — of a cabdriver who sent money to a terrorist organization in Somalia. A White House-appointed panel came to the same conclusion and recommended a reversion back to traditional legal methods of obtaining data.

We are constantly being profiled. On the corporate side, we are willingly — though often unwittingly — giving up our information to the “predictive analytics” departments of Target, Amazon, the U.S. Postal Service, and so on. The government, meanwhile, is also interested in predicting our behavior to anticipate acts of terrorism.

In honor of the upcoming Super Bowl, imagine the situation this way. Each one of us is a quarterback. We’ve taken the snap. But two very large linebackers — the government and the corporations — have easily gotten around the blockers. This is the blitz. And suddenly we’re getting hit from two sides, and our privacy tumbles out of our hands as we go down. The linebackers pounce on the bouncing ball.

So far, the government and the corporations have only coordinated their assault on our privacy in a selective way, with agreements between the NSA and the phone companies and Internet providers. But imagine what it might be like if the FBI calls us in for a chat one day based on a profile constructed out of our Amazon purchases (Chomsky), Target receipts (bullhorn and posterboard), and Google Chat (about the illegality of drone strikes)? What if the Amazon recommendation system offers subtle entrapments: “you liked the Koran, why not try Sayeed Qutb’s Milestones and the Complete Book of Explosives?”

The linebackers are bulking up, and the blockers are getting thinner by the minute. How do we defend against the blitz? Cancel our Facebook accounts? Break out the aluminum foil?

On the government side, we should turn back the clock. As Michael Ratner writes at Truthout, “Warrantless surveillance should be stopped altogether, and metadata should only be collected and retained on an individual basis by a court order under the Fourth Amendment, with a standard of probable cause.” Takes too long, you object? In that single example of terrorism prevention, the NSA shared the phone number of the cabdriver with the FBI and it took them two months to begin their investigation.

On the corporate side, we can “opt out” of information sharing in many of our interactions — on line, through the postal service, with the telephone company. It’s not just about blocking junk mail and robocalls. It’s about donning a hazmat suit when venturing out into the Internet.

We have become all too comfortable opening up our lives to the scrutiny of others. Privatization is still all the rage in the economic sphere. How about a campaign to privatize privacy?