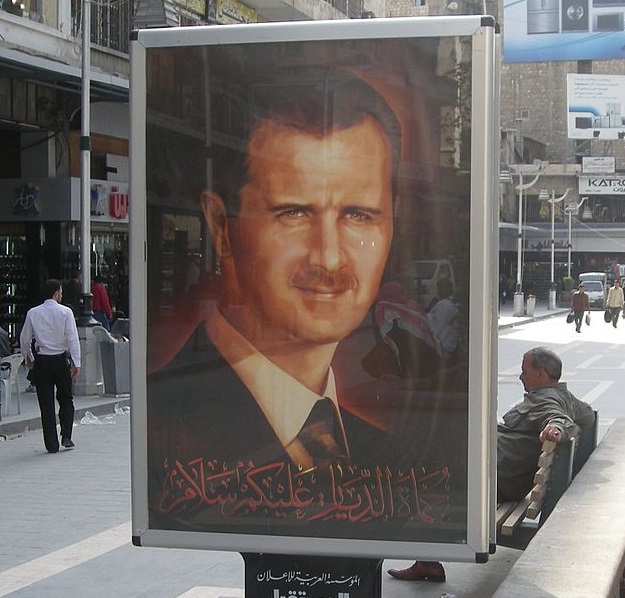 Though it’s not certain Syrian President Assad was responsible for what looks like chemical-weapons attacks, his behavior seldom fails to disturb.
By Russ Wellen | August 26, 2013

Syrian President Assad insists that the apparent chemical-weapon attacks that have left upwards of 1,000 people dead in his country were committed by “terrorists,” as he calls the opposition. That’s his story and Russia and Syria are sticking to it.

Meanwhile, Reuters reports that they were carried out “likely with high-level approval from the government of President Bashar al-Assad, according to American and European security sources.”

But, as Assad himself points out in an interview with Izvestia reported on by the New York Times:

… government troops would have risked killing their own forces if they had used chemical weapons. “This contradicts elementary logic,” news reports quoted him as saying. It is “not us but our enemies who are using chemical weapons,” he said, referring to antigovernment rebels as “the terrorists.”

Bearing in mind that just because he invokes logic doesn’t necessarily mean Assad actually isn’t capable of acting irrationally. But remember the area subjected to clouds of poison gas was the suburbs of the capital, Damascus, also his home. Though I’m unfamiliar with drift patterns of poison gas, putting Damascus, himself, and his famly in possible harm’s way would make him obstinate to the nth degree, not to mention self-destructive, on top of irrational. We’re talking about Hitler territory.

While it’s doubtful the opposition launched the attacks, one can’t help but wonder if, directly or by discrete suggestion, he delegated such authority to generals in order for him to maintain plausible deniability. If cornered, Assad can claim rogue elements of the military were responsible and, without immediately naming names, promise to investigate.

Assad finally agreed to admit U.N. inspectors, but that may be an empty gesture. The Wall Street Journal reported that

… the U.S. rebuffed Syria’s decision, saying the offer came too late to be credible. … “At this juncture, the belated decision by the regime to grant access to the U.N. team is too late to be credible, including because the evidence available has been significantly corrupted as a result of the regime’s persistent shelling and other intentional actions over the last five days,” [an] official added.

Meanwhile, the U.S. is increasingly drawn to an armed attack. As for actually ridding Syria of its chemical weapons, as with Iran’s nuclear complex, it’s, well, complex. In November of last year, David Sanger and Eric Schmitt reported for the Times:

The Pentagon has told the Obama administration that any military effort to seize Syria’s stockpiles of chemical weapons would require upward of 75,000 troops.

Complicating it further was the discovery that Hezbollah fighters have been training near some of Syria’s chemical-weapons depots. Said one senior American official: “… the fear these weapons could fall into the wrong hands is our greatest concern.”

Though it’s difficult to imagine what could be wronger hands than Assad, the Syrian military, or the opposition.

In the interview with Izvestia, Mr. Assad said, “America has taken part in many wars but could not once achieve its political goals for which the wars were started. Yes, it is true, the great powers can wage wars but can they win them?”

That might seem like a threat, necessarily empty because of the differential in military power between Syria and the United States. But, as we all well know, he’s not wrong. None of our large-scale interventions, from Vietnam to Iraq to Afghanistan, can, in any sense of the term, be characterized as victories.